Suddenly, at the level of central banks, Australia is regarded as an investment risk.

On Wednesday Martin Flodén, the deputy governor of Sweden’s central bank, announced that because Australia and Canada were “not known for good climate work[1]”.

As a result the bank had sold its holdings of bonds issued by the Canadian province of Alberta and by the Australian states of Queensland and Western Australia.

Martin Flodén, deputy governor Sveriges Riksbank Central Bank of Sweden[2] Central banks normally make the news when they change their “cash rate” and households pay less (or more) on their mortgages. But central banks such as Australia’s Reserve Bank and the European Central Bank, the People’s Bank of China and the US Federal Reserve have broader responsibilities. They can see climate change affecting their ability to manage their economies[3] and deliver financial stability[4]. There’s more to central banks than rates 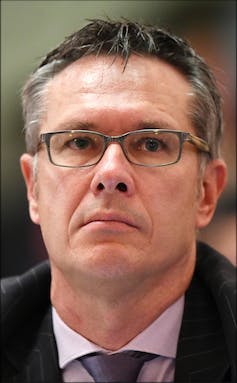 Reserve Bank deputy governor Guy Debelle. Extreme events not cyclical. DAVID MOIR/AAP As an example, the new managing director of the International Monetary Fund Kristalina Georgieva warned last month that the necessary transition away from fossil fuels would lead to significant amounts of “stranded assets[5]”. Those assets will be coal mines and oil fields that become worthless, endangering the banks that have lent to develop them. More frequent floods, storms and fires will pose risks for insurance companies. Climate change will make these and other shocks more frequent and more severe. In a speech in March the deputy governor of Australia’s Reserve Bank Guy Debelle[6] said we needed to stop thinking of extreme events as cyclical. We need to think in terms of trend rather than cycles in the weather. Droughts have generally been regarded (at least economically) as cyclical events that recur every so often. In contrast, climate change is a trend change. The impact of a trend is ongoing, whereas a cycle is temporary. And he said the changes that will be imposed on us and the changes we will need might be abrupt. The transition path to a less carbon-intensive world is clearly quite different depending on whether it is managed as a gradual process or is abrupt. The trend changes aren’t likely to be smooth. There is likely to be volatility around the trend, with the potential for damaging outcomes from spikes above the trend. Australia’s central bank and others are going further then just responding to the impacts of climate change. They are doing their part to moderate it. No more watching from the sidelines 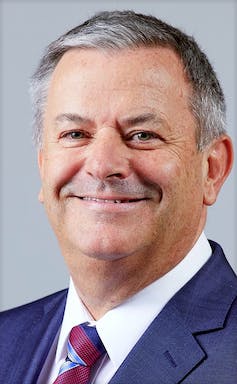 Peter Zöllner of the Bank for International Settlements launched the Green Bond Fund. BIS Over thirty central banks (including Australia’s), and a number of financial supervisory agencies, have created a Network for Greening the Financial System[7]. Its purpose is to enhance the role of the financial system in mobilising finance to support the transitions that will be needed. The US Federal Reserve has not joined yet but is considering how to participate[8]. One of its credos is that central banks should lead by example[9] in their own investments. They hold and manage over A$17 trillion. That makes them enormously large investors and a huge influence on global markets. Read more: Central banks are waking up to climate change dangers. It's about time[10] As part of their traditional focus on the liquidity, safety and returns from assets, they are taking into account climate change in deciding how to invest. The are increasingly putting their money into “green bonds[11]”, which are securities whose proceeds are used to finance projects that combat climate change or the depletion of biodiversity and natural resources. Over A$300 billion worth of green bonds were issued in 2018, with the total stock now over A$1 trillion. Central banks are investing, and setting standards While large, that is still less than 1% of the stock of conventional securities. It means green bonds are less liquid and have higher buying and selling costs. It also means smaller central banks lack the skills to deal with them. These problems have been addressed by the Bank for International Settlements[12], a bank owned by 60 of the central banks. In September it launched a green bond fund[13] that will pool investments from 140 (mostly central bank) clients. Its products will initially be denominated in US dollars but will later also be available in euros. It will be supported by an advisory committee of the world’s top central bankers. Read more: Business big hitters highlight the huge growth in climate risk management[14] It is alert to the risk of “greenwashing[15]” and will only buy bonds that comply with the International Capital Market Association’s Green Bond Principles[16] or the Climate Bond Initiative’s Climate Bond Standard[17]. Launching the fund in Basel, Switzerland, the bank’s head of banking Peter Zöllner said he was confident that, by aggregating the investment power of central banks, we can influence the behaviour of market participants and have some impact on how green investment standards develop It’s an important role. Traditionally focused on keeping the financial system safe, our central banks are increasingly turning to using their stewardship of the financial system to keep us, and our environment, safe.