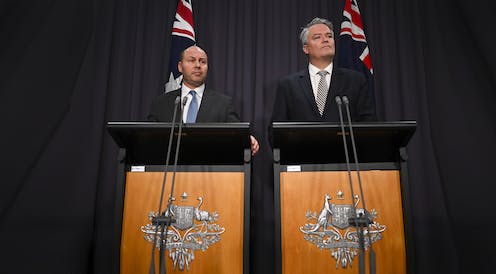 The budget was for practical purposes in neither deficit nor in surplus in 2018-19, the final figures released by Treasurer Josh Frydenberg and Finance Minister Mathias Cormann on Thursday reveal.

The underlying cash deficit was just A$690 million[1], which, on the scale of Commonwealth budgets, is close to nothing: 0.0% of GDP.

Read more: Were you paying attention on budget night? Test yourself with this quiz[2]

If there is a surprise in the result, it is that there wasn’t a surplus despite booming commodity prices, stronger than expected employment growth and a massive $4.5 billion saving on the roll out of the National Disability Insurance Scheme.

Company tax receipts haven’t changed much from the April estimate, despite much stronger than forecast commodity prices at the end of the financial year. Tobacco taxes came in at just $12.1 billion despite a forecast of $12.9 billion five months ago.

The tax boost is dwindling

If so, it’s good news for the economy, as it suggests consumers might start to enjoy stronger growth in post-tax incomes.

Here’s how Reserve Bank Governor Philip Lowe expressed his concerns[3] about the Tax Office’s recent success to the Economic Society in May:

Over the past year, tax paid by households increased at a much faster rate than did income; almost 10%, compared with 3.25% – that is a big difference and it is unusual.

With the budget effectively in balance, a surplus in the financial year ahead seems all but assured. With government finances in good health, the next question is what to do with the surplus.

There is, as one commentator said after the release of the final outcome, “a mountain of debt to be repaid”.

That is currently the plan, but there is also a growing call for the government to spend more or cut taxes further to lift consumer spending and economic growth and take pressure off the Reserve Bank.

The surplus should be used for something special…

Australia’s most serious economic challenge is to reignite productivity growth and get the benefit of that into everyone’s pay packet via higher real wages.

With the election out of the way, now is the perfect time to re-set the economic policy agenda.

Structural reform is politically difficult. Getting out of bad industries and work practices into better ones is painful and hard to sell. But it works. It’s what the Hawke government did for us in the 1980s.

What’s needed is to encourage businesses to invest in technologies and work practises that maximise the output of every hour that people spend at work.

It requires a 20 year view, and it is best done by compensating losers. That’s expensive and can only really be done when finances are in good order, as they have just become.

We are still waiting to see the effects of the tax refund boosts[4] announced in the 2018 and 2019 budgets. We also need to wait a little longer to see what the impact of rate cuts[5] and the easing of rules governing lending[6] on the housing market and consumers.

The early signs are mixed. The only strong reaction we are seeing is in the Sydney and Melbourne property markets. Auction clearance rates are surging to boom-time levels and property prices are on the rise again.

Read more: Cutting interest rates is just the start. It's about to become much, much easier to borrow[7]

Consumption seems to have stabilised and consumer attitudes to their own financial positions remain healthy. The latest employment numbers show continued growth while the Treasurer noted that the proportion of working age population on welfare is at its lowest in 30 years.

Until it is clear that the economy is faltering, or employment growth is threatened, I very much doubt that this government will contemplate short-term fiscal stimulus.

It shouldn’t. There are more important uses for its money.