British health-care conglomerate Bupa runs more nursing homes in Australia than anyone else. We now know its record in meeting basic standards of care is also worse than any other provider.

This is more than a now familiar story of a corporation putting shareholders before customers. It is also about another abysmal design failure in regulation.

Health care is meant to be one of our most regulated sectors. In this case, Bupa’s facilities were inspected and certified by the Aged Care Quality and Safety Commission.

The regulator’s inspectors found 45 of Bupa’s 72 nursing homes[1] failed health and safety standards. In 22 homes the health and safety of residents was deemed at “serious risk”. Thirteen homes were “sanctioned” – with government funding being withheld and the homes banned from taking new residents.

Yet none of this appears to have spurred Bupa’s management into action, according to media reports[2]. Flurries of inspection reports and written warnings over months and years only underlined that the regulatory tiger, even if it had teeth, had a very soft bite.

We have seen examples of equally insipid regulation in other areas. In the building sector, for example, a range of regulatory flaws including outsourced building certification[3] have led to shoddily built and dangerous apartment construction.

In the financial sector, the banking royal commission castigated the industry regulators – the Australian Securities and Investments Commission and the Australian Prudential Regulatory Authority – for their unwillingness to enforce rules.

This failure is due to more than individual agency shortcomings. It’s an unintended consequence of the design of “responsive regulation” – the system that has superseded command-and-control regulation over the past three decades.

Responsive regulation was popularised by Australian sociologist John Braithwaite and American law professor Ian Ayres in the early 1990s. It was intended to overcome the pitfalls of the command-and-control model, which involved regulators employing large numbers of inspectors to look for non-compliance.

From about the 1970s it had become increasingly evident this model wasn’t working. It was also very expensive. Consider, for example, the cost of having fire and health and safety inspectors visit every single building site, particularly when most builders were doing the right thing. The cost and intrusiveness of the system fuelled calls to do away with regulation .

Too big to fail

Ayers and Braithwaite saw their model as a way forward. “Responsive regulation is not a clearly defined program or a set of prescriptions concerning the best way to regulate,” they explained[6]. “On the contrary, the best strategy is shown to depend on context, regulatory culture and history.”

Responsive regulation assumes that in most cases the enterprises being regulated are interested in compliance and will respond to light-touch directives. It assumes that often compliance failures are due to ignorance or inadequate procedures. Its approach is to give parties a chance to amend their ways.

But there’s a potentially huge flaw in the responsive regulation model. What happens when an organisation is so large it is deemed too big to fail, or deems itself so? 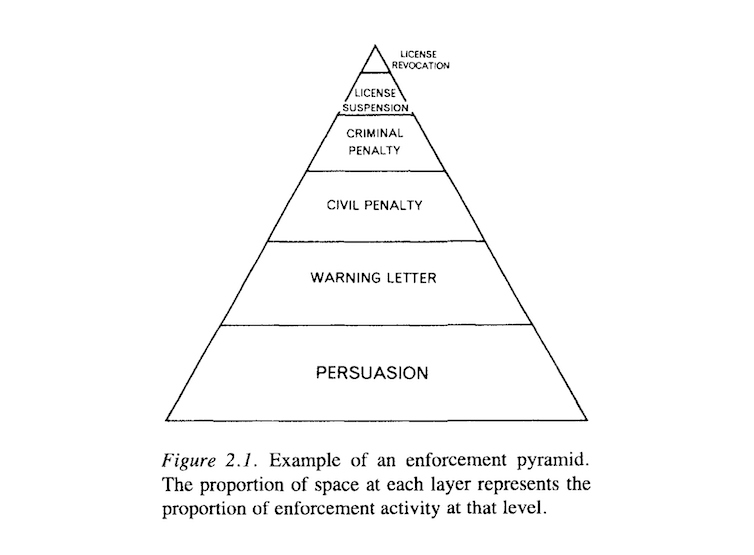 How Ian Ayres and John Braithwaite conceived the enforcement pyramid in responsive regulation. The problem now seems to be that regulators want to stop halfway. Responsive Regulation: Transcending the Deregulation Debate[7]

In such cases, because of the timidity of the regulator or the confidence of the enterprise, the warnings might just go on and on. The company continues to book its profits – which may well eclipse any penalty it might have to pay if crunch time does ever come.

Markets have their limits

This design flaw highlights a more fundamental problem with governments positioning themselves as rule makers and leaving the rest to the “market”.

Markets are designed to facilitate exchange on the basis of profits. The profit motive means market participants look for the lowest-cost option. In aged care this means paying the lowest possible wages, possibly to unqualified staff, and cutting corners to cut costs.

Markets are very useful for increasing individual choices and efficiently allocating resources, but they are not suited to every task. They fail when factors other than profit ought to be considered.

We therefore need to think about the design of regulatory systems more holistically, as part of a broader social process.

The pioneers of responsive regulation certainly understood this. They emphasised flexibility, taking into account context, culture and history.

What those three things now tell us, given widespread regulatory failure across industries, is that government should not resist stepping in to provide important public services where the private sector cannot or will not do so at an acceptable level. Nor should it be afraid to act through empowered regulators, with ressources and powers to fulfil their mandates.