“To all the Dads in Australia,” Prime Minister Scott Morrison declared in his Father’s Day message[1] last year, “keep up the good work, because the kids of our country need the best dads possible.”

What can a government do to encourage the best fathers possible? The single greatest gift might be functional parental leave policies that actually encourage men to take time off and be active early in family life.

Right now paternity leave in Australia isn’t working for fathers. Just one in four[2] use the two weeks’ leave available to them as “partner pay” in the first year of a child’s life. The obvious reason is it is paid at the minimum wage, which means it doesn’t resolve the conflict that fathers face in choosing between financially supporting or spending time with their families.

We need to bridge the gap, because there’s increasing evidence that encouraging fathers to take paternity leave has positive, perhaps even surprising, results.

Parental leave entitlements are a combination of government and workplace arrangements, so what’s available to dads can differ. The minimum entitlement in Australia, as mentioned, is the federal government-paid “Dad and Partner Pay[3]” (DaPP). The government also provides 18 weeks’ pay at the minimum wage to the primary care giver, but fathers claim this in just 5%[4] of cases.

The tendency is for mothers to also take the bulk of leave entitlements in “shared parental leave” systems, where leave is granted to the couple, who then decide how to split it. New Zealand and Canada have such systems, and the evidence is they do not encourage fathers to take leave. 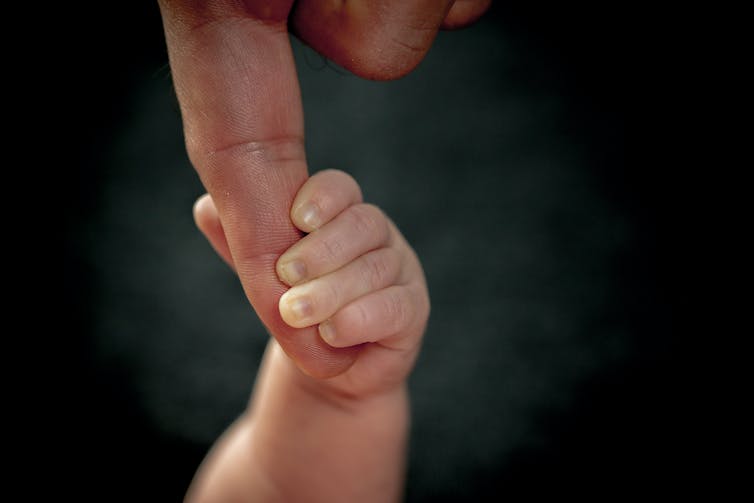 Studies suggest increasing paternity leave is associated with both fathers and mothers being happier. www.shutterstock.com

The best example is probably Sweden, a pioneer of parental leave. It introduced generous entitlements in 1974[6], paying up to six months in shared leave. But just 10 days were reserved for dads. Just 6% of fathers[7] took up any of the shared leave.

In 1995 Sweden upped the “daddy quota” to bring more balance to the scheme. Now the Swedish government mandates three months’[8] leave as the exclusive right of either parent, with a total of 480 days in shared parental leave.

There is increasing evidence of the benefits of ensuring a “daddy quota”.

A new study tracking the outcomes of paternity leave in South Korea since 2007[9] concludes that taking paternity leave is positively associated with life satisfaction for both fathers and mothers[10].

Iceland introduced four week’s dedicated paternity leave in 2001. A 2018 study[11] of 600 families compared the relationship stability of couples who had children just after the reform with those who had children just before (and who were therefore ineligible). The researchers found fathers taking the leave was associated with significantly less relationship breakdown[12]. Their divorce rate was 8.3% lower five years, and 3.4% 15 years later.

One probable reason for these surprising results is indicated in a 2014 Swedish study that suggests fathers’ taking more parental leave leads to greater later sharing of childcare and housework. The study, based on surveys of 235 women and 154 men, found there was subsequently more equal division of responsibilities[13] when dads took more than a month’s paternity leave.

Given the opportunity, most fathers would like to take more family leave. In a 2014 survey[14] of 1,000 new Australian dads who had taken DaPP leave, 75% said they wished they could have taken more leave. In more than half the cases, the reason was affordability. More than a quarter also reported experiencing discrimination when requesting or taking parental leave.

Given the emerging evidence of long-term positive benefits for families, we need to talk about ways to increase the daddy quota.

Read more: Fathers also want to ‘have it all,’ study says[15]

Designing parental leave systems isn’t easy. Getting the balance right is hard. There are significant equity debates. Who pays? Is it more equitable to pay a flat or minimum rate? Is it more effective to peg the rate to an individual’s salary? Should there be a deadline on when leave is taken? The Swedish system, for example, gives parent seven years, recognising that children’s needs don’t diminish once they can feed themselves.

But if we truly want the best dads possible, we should be discussing how to support them with more than words.