With China’s western-most province of Xinjiang being turned into a mass internment camp[1], last night’s ABC Four Corners[2] program reported on the Chinese Communist Party’s alleged plans to put up to a million detained Uyghurs to work.

The exposé highlights how global supply chains make it possible for the clothes you’re wearing, and many other things you own, to have been made using slavery.

The program featured the cases of several women who say they have been forced to work in textile factories. According to China scholar Adrian Zenz, government documents reveal plans[3] for “re-education” through labour. Satellite photos show what look like large warehouses close to detention camps.

Read more: Explainer: who are the Uyghurs and why is the Chinese government detaining them?[4]

Target, Cotton On, Jeanswest, Dangerfield, IKEA and H&M are among the brands in Australia sourcing cotton from Xinjiang, according to Four Corners. In response to questions from the ABC, Target and Cotton On declared they would investigate their relationships with suppliers. 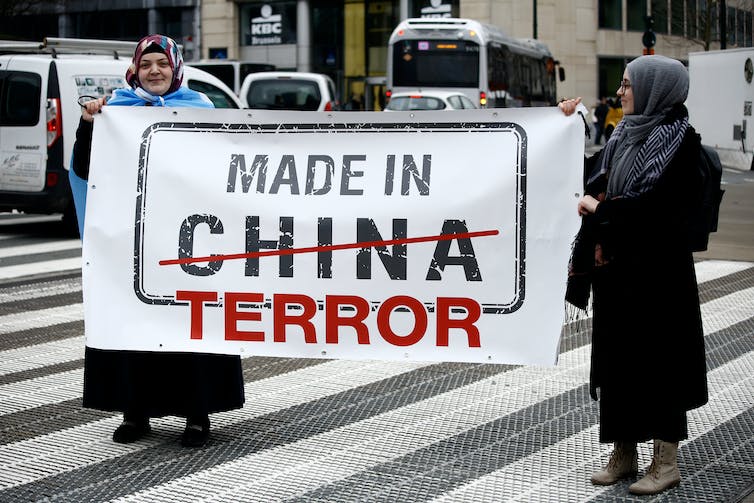 Activists protest the treatment of Uyghur Muslims outside the headquarters of the European Union, in Brussels, in February 2019. Alexandros Michailidis/Shutterstock

For many of us it is hard to believe modern slavery is now more prevalent than at any time in history.

But the ubiquity and lack of accountability in global supply chains mean an estimated 25 million people[5] around the world are in forced labour. A further 15 million are in forced marriage.

About two-thirds[6] of the total number of people in modern slavery are in the Asia-Pacific region, where most Australian companies source their materials and products.

The problem is so widespread it’s unlikely any companies’ operations or supply chains are completely free of modern slavery.

Yet many businesses are unaware of what modern slavery is and what it might look like in their operations and supply chains. And some companies – and their customers – may be complicit in creating a “race to bottom” by demanding cheaper goods and services without checks on social (and environmental) credentials. 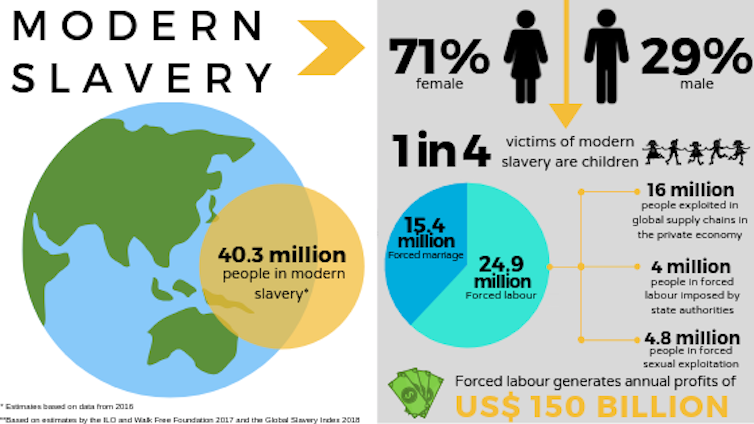 Anti-Slavery Australia Australia’s legal reforms This problem was recognised with Australia passing modern slavery legislation last year. The Modern Slavery Act 2018[7] requires businesses of a certain size to report their efforts to keep their supply chains slavery-free. The requirements came into effect this month. Modelled on the UK Modern Slavery Act 2015, Australia’s law requires businesses with a consolidated annual revenue of more than $100 million a year to publish an annual modern slavery statement. The statement must address seven mandatory criteria (including risks in the business’ operations and supply chains and the actions taken to address those risks). Read more: At last, Australia has a Modern Slavery Act. Here's what you'll need to know[8] The government has the power to publicly name those that fail to comply, but not to fine or penalise them in other ways. It is hoped fear of shaming will be enough icentive to avoid the reputational, financial and other risks that might arise from public scrutiny. Without penalties, civil, shareholder and consumer activism will be crucial to motivate businesses. If nothing else, as shoppers we can become better informed about the risks in business supply chains and challenge companies and governments to do better through social media and other avenues. Each purchase of a good or service can be an ethical choice. More to be done In the end, the Australian modern slavery legislation is about ensuring businesses do their part to ensure the food, clothes and electronics we buy have not been made using modern slavery. Drawing on Anti-Slavery Australia’s legal casework experience with survivors of modern slavery, we also know victims aren’t just overseas. An estimated 1,500 people in Australia are victims of modern slavery. They are often migrants, who fear coming forward and are intimidated by the legal system. Read more: Human trafficking and slavery still happen in Australia. This comic explains how[9] We continue to advocate for further improvements[10] of the Modern Slavery Act, including for penalties and independent oversight. NSW has its own legislation that’s about to go under review and it includes an independent Anti-Slavery Commissioner and penalties for up to A$1.1 million for failing to comply or making false or misleading statements. These would be welcome additions to the federal regime, along with more support for survivors, and better monitoring and data collection. We’ve taken a step in the right direction, but as the ABC Four Corners’ exposé indicates, there is much more to be done. Anti-Slavery Australia, based at the University of Technology Sydney, is Australia’s only specialist legal research and policy centre focused on the abolition of modern slavery in all its forms. For more information or confidential legal advice, contact www.antislavery.org.au[11]. For information and advice on forced marriage, see www.mybluesky.org.au[12].