Someone we know recently told us about a team-building event that proved anything but.

The chief executive who arranged it loved mountain biking. So he chose a venue to share his passion with his team. On the day, he shot around the track. Others with less experience took up to three hours longer. He settled in at the bar with a small entourage. Other staff trudged in much later, tired and bloody, not feeling at all like a team.

Many of us can recall team-building exercises that seemed like a waste of time. One problem is overcoming the natural human tendency to hang out with those people we already feel comfortable with, just as that chief executive did.

We suggest there is a better team-building approach. It doesn’t involve bicycles or obstacle courses or whitewater rafting. It doesn’t even necessarily involve your whole team.

It’s about understanding that teams are social networks built on connections between individuals. It involves deep one-on-one conversations, designed to get people out of their comfort zones.

In any situation, be it at a party or at work, most of us naturally tend to gravitate towards those we know. In doing so we strengthen already strong relationships. Familiarity creates psychological safety[1] – the feeling of trust that you are free to be you.

Read more: Meet me at the bar! How uni students interact on a campus, and why chocolate can help[2]

Research suggests psychological safety is crucial in the work environment. There is much more to team success than simply focusing on the task at hand. Team members need to talk regularly, and be comfortable raising difficult issues. Feeling able to make a mistake and express oneself freely improves team performance[3] and the ability to innovate[4].

Building psychological safety takes time, however, and normal workplace interactions may not be conducive to developing trust naturally. Which is why managers often turn to team-building exercises.

But what exercises work the best?

Well-designed team-building should target and strengthen relationships that are for some reason too weak. Such weaknesses can disrupt communication networks by stopping critical information from getting to the people who need it.

We have used what is called social network analysis[5] to map relationships in project teams.

Social network analysis is used in economics, marketing and management to study the structures of relationships between people and organisations. The focus is on the structural patterns of relationships within the entire team. These patterns can be systemically visualised using network graphs, such as those below.

As researchers we gauged the strength of connections by asking questions such as: “How often or how comfortable are you talking to each member of your team?”

A network diagram of a team can visualise potential communication gaps. Circles stand for team members and lines depict the most comfortable relationships. Team members who are relatively more comfortable with each other are placed closer together. Authors

The above two diagrams are the same group three months apart. In scenario (a) the group was split into two subgroups that were relatively comfortable communicating with each other. The group had, in fact, been two teams, brought together under a single manager. They were co-located but still largely working as two separate groups.

The company’s management thought team-building might help bring the subgroups together, and asked us to help. Scenario (b) shows the team three months later. There were more connections within the group, with one individual particularly pivotal in unifying the team.

What caused this change? Not traditional team-building exercises but “targeted self-disclosure exercises”.

Read more: Celebrities and politicians tell us their deepest, darkest secrets. Why?[6]

We began with social network analysis to identify pairs of colleagues whose relationships were critical for the cohesion of the network, and would benefit the group by being stronger. We then paired people across the group divide and let those pairs do an exercise involving a structured conversation over one hour, working through a series of 36 increasingly personal questions.

“Given the choice of anyone in the world, whom would you want as a dinner guest?”

Near the end of the session, they’re like this:

“When did you last cry in front of another person? By yourself?”

You may have heard of this before, as the “36 questions that lead to love”.

The questions were first published in 1997 as part of research by psychologist Arthur Aron and colleagues[7] about how feelings of interpersonal closeness are cultivated by disclosing personal details.

They became an internet sensation in 2015, after an article in The New York Times[8] by Mandy Len Caltron pitched them as a technique “to fall in love with anyone”. But their applicability is by no means limited to romantic contexts, as our workplace experiments have demonstrated.

The last question involves you sharing a personal problem with your discussion partner and asking their advice on how to handle it.

This is not the sort of thing most people would normally chose to do at work, but our results show its worth. We measured[9] significantly changed patterns of communication over three months. Participating pairs felt more comfortable talking to each other, and talked more often – the most common change being from “not in the last month” to “once a week”.

The participants who got to know each other better also started to talk about work a bit more, as shown in the chart below. The change – about half a point increase on a six-point frequency scale – was relatively small compared to the dramatic increase in the personal comfort the participants felt towards each other, but even a small change can make a big difference. 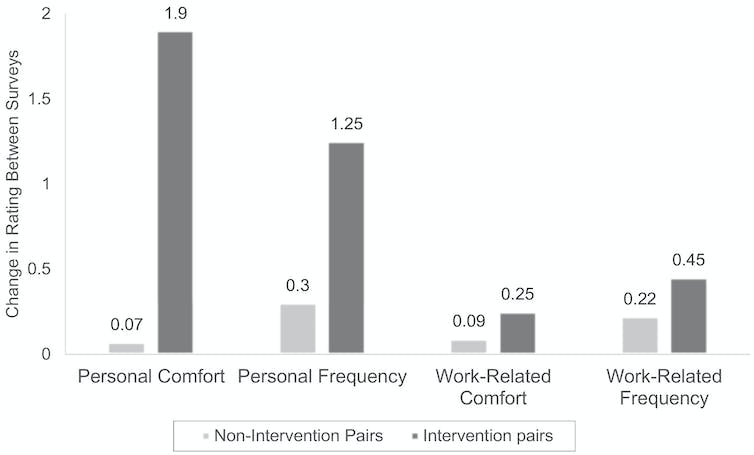 A comparison of changes in relationship strengths over three months among pairs of co-workers who participated in a self-disclosure exercise and those who did not. Comfort is measured on a 10-point scale and frequency on a 6-point scale. The authors

Importantly, as already shown in the first diagram, the divide between the two cliques decreased by more bridging links being created.

For some, there is a clear line between work life and personal life. Not everyone feels comfortable with talking about personal issues, let alone with colleagues to whom they’re not close. It’s true that rapid personal disclosure can be risky[10].

In any such exercise you need to proceed at a pace at which you and your colleague are willing to reciprocate. Though the gradually increasing sensitivity of questions in the facilitated self-disclosure exercise are meant to help achieve this, even then it may not suit everyone – and management shouldn’t compel anyone to feel uncomfortable.

Read more: Why too many fearless people on a team make collaboration less likely[11]

But if you are willing to accept a little discomfort, our findings[12] suggest that sharing a bit more in the workplace can be both personally rewarding and beneficial to the group.