June 19, 2019 is the 50th anniversary of Australia’s industrial relations system endorsing the principle of “equal pay for equal work”.

Yet, five decades on, a gender pay gap[1] remains.

The 1969 decision was a breakthrough, but also highlighted the problem of putting principle into practice, given a legacy of past decisions being based on clear notions of “male” and “female” jobs.

While various factors contribute to the overall gender pay gap[2], about 30% is due to gender concentrations[3] by industry and occupation.

Decisions dating back a century have contributed to the unequal wage patterns we still see today, with female-dominated jobs clustered at the lower end of the pay spectrum. 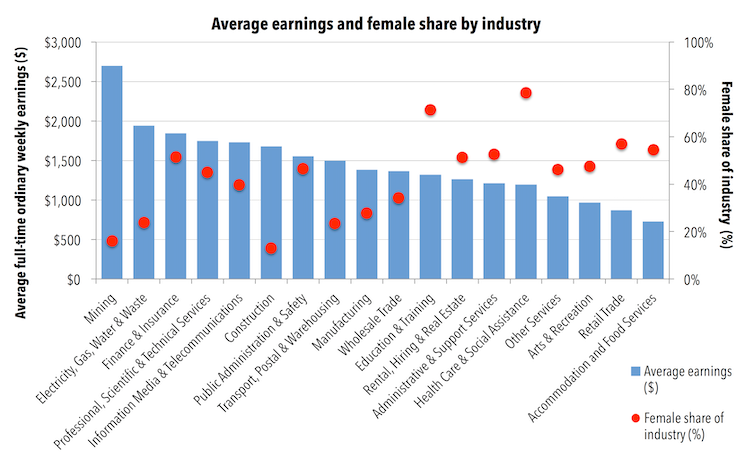 ABS Census of Population and Housing 2016, and ABS Average Weekly Earnings 2018 (Cat No. 6302.0)., Author provided It’s difficult to untangle today’s gender pay gap from the pages of history. A living wage, but based on men A gap between men’s and women’s pay was effectively established early in Australia’s centralised wage-fixing system. 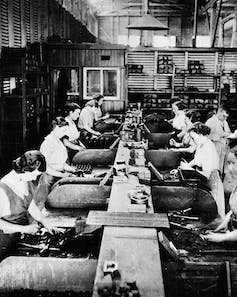 Women working in the Sunshine Harvester factory during World War II. Museum Victoria[5] In 1907, the first landmark decision of the new Commonwealth Court of Conciliation and Arbitration set down the principle of the “family” or “living” wage. In the Harvester Case[6] (stemming from a pay dispute at Sunshine Harvester, a Victorian maker of farming equipment), the court decided 7 shillings a day was the minimum pay needed by an unskilled labourer – on the basis that the labourer was male and needed to provide for a wife and three children. The decision laid the foundation for a national minimum wage, but also left female workers out of the picture. Equal pay, but only for men’s work The underlying presumption that a woman didn’t need to be paid as much as a man was confirmed by Justice Henry Bourne Higgins, the president of the Court of Conciliation and Arbitration, in the Fruit Pickers Case[7] of 1912. In this, the court’s first explicit ruling on women’s pay, Justice Higgins declared women should be paid the same as men – but only when they did jobs predominantly performed by men (such as blacksmiths) or were “in competition” with men (such as fruit-picking). This was out of concern that allowing a lower pay rate for women could put men out of work. In jobs undertaken only or mainly by women, such as packing fruit, it was a different matter. A woman’s wage could be lower than a man’s, Justice Higgins said, under the assumption that women “have to find their own food, shelter, and clothing; not food, shelter and clothing of a family”. It was men, he explained, who had the obligation to provide for their wife and children: How is such a minimum applicable to the case of a woman picker? She is not, unless perhaps in very exceptional circumstances, under any such obligation. Justice Higgins set the minimum pay for fruit-packing jobs – “in which men are hardly ever employed” – at 75% of that for[8] fruit-picking. In the Clothing Trades Case of 1919, more concern about costs led him to decide the basic wage for women should be 54%[9] of men’s. This gender discrepancy in pay narrowed to 75% with World War II, when women stepped into jobs vacated by men and special regulations[10] were enacted. This 75% rate was accepted as the standard in the 1949-50 Basic Wage Case. Accepting equal pay, in principle As social attitudes evolved, the 1950s and 1960s saw more women joining the paid workforce[11]. Pressure[12] grew to match international conventions[13] on equal pay. Unions led by the Australasian Meat Industry Employees Union, with a young Bob Hawke serving as their lead advocate, took up the cause. In the 1969 Equal Pay Case[14], the Conciliation and Arbitration Commission (which had replaced the Court) finally accepted the principle of equal pay for equal work. It tempered this acceptance, however, by acknowledging that putting the principle into practice would be complex[15]: While we accept the concept of “equal pay for equal work” implying as it does the elimination of discrimination based on sex alone, we realise that the concept is difficult of precise definition and even more difficult to apply with precision. 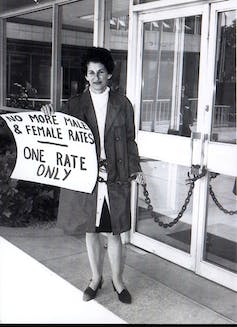 Zelda D’Aprano,a clerk at the Australasian Meat Industry Employees’ Union, chained herself to the front doors of the building occupied Commonwealth Conciliation and Arbitration Commission. Museum of Australian Democracy[16] The “mere similarity in name of male and female classifications”, the commission said, “may not be enough to establish that males and females do work of a like nature”. This meant the principle only immediately applied to women doing exactly the same work as men, and employed in predominantly male occupations. Fewer than one in five working women[17] benefited from the outcome. Three years later, the 1972 Equal Pay Case[18] expanded on the 1969 principle to encompass “equal pay for work of equal value”, with a single rate for a job, regardless of gender. But with women and men often finding themselves in different types of work – and the nature of that work often differing vastly – the dilemma of figuring out how to measure “work of equal value” remained. It persists to this day. Finding a ‘comparable’ male job Today’s Fair Work Commission has inherited the legacy of its past judgements. To agree a low wage rate in an occupation dominated by females is an issue of gender inequality, Australia’s Fair Work Act requires identifying a “comparable” male occupation. This means pointing to a job chiefly performed by men that is similar to the female job in skill requirements and job responsibility[19] but higher paid. History shows finding such a “comparator[20]” occupational group has been hard to achieve[21]. It’s a problem faced by those arguing for higher wages in occupations such as childcare. 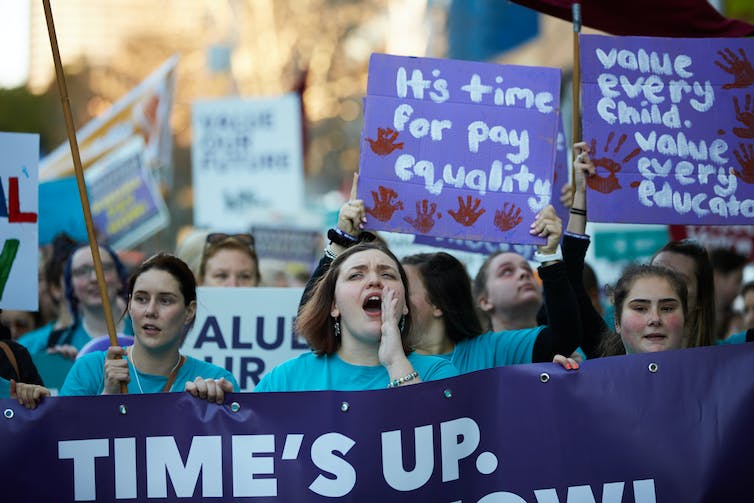 Sydney childcare workers protest for better pay and conditions on September 5, 2018. Erik Anderson/AAP It leads us to ask: how can we meaningfully measure and compare the value of jobs that are so different in nature? Read more: How skills and personality traits contribute to the gender pay gap[22] It’s an especially important question for jobs in areas such as childcare[23], schooling[24] and health services[25] – which generate society-wide benefits[26] but are not necessarily well-paid. When the wider benefits of a job are not reflected by the market wage, this creates what economists call a market failure[27]. It spells a role for governments to step in and correct it. One innovative approach could be to use occupation-targeted lower income tax rates[28] for jobs with high societal value.