This is despite Chinese investors still generally regarding Australia as safer and more attractive than most other countries. So 2018 need not be a turning point. But it is cause for reflection.

Discussion about Chinese investment in recent years has been dominated by political and security concerns. These concerns need to be balanced by the national interest in economic prosperity. Chinese investment creates jobs, increases export opportunities and deepens relations with our most significant trade partner.

Arguably the pendulum has to swing back to thinking about the economic benefits. We need a more balanced national conversation.

Many losers, one winner

Our data covers direct investments through mergers and acquisitions, joint ventures and new projects. We do not include portfolio investments, such as buying stocks and bonds, which do not result in foreign management, ownership or legal control. Nor do we include residential property sales.

In the mining, agribusiness and services sectors investment fell by more than 90%. In renewable energy it fell by 48%, and in commercial real estate by 31%. 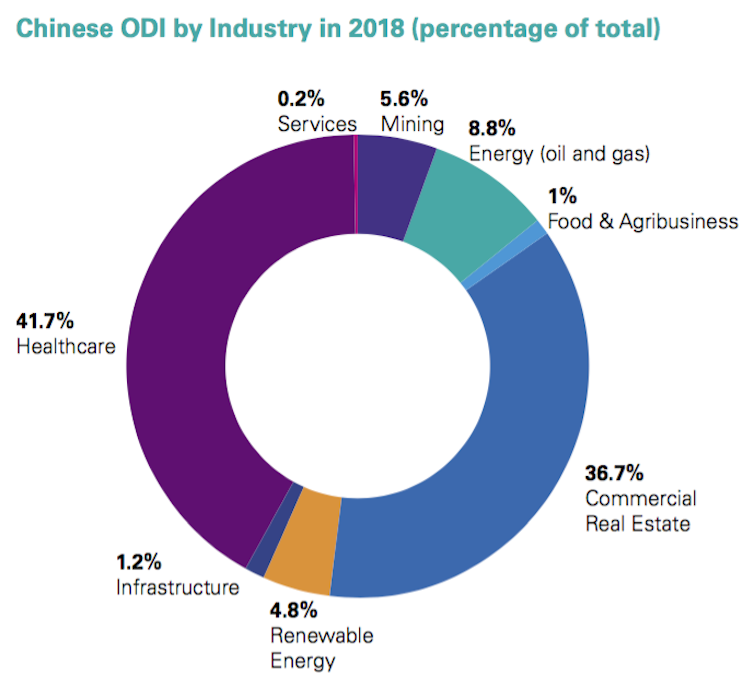 Chinese direct investment in Australia by Industry in 2018 (percentage of total). The KPMG/Sydney University database, Author provided (No reuse)

This reflects the Chinese government’s greater control of capital outflows and pressure to reduce debt levels, as well as the Australian government’s security concerns about Chinese influence. 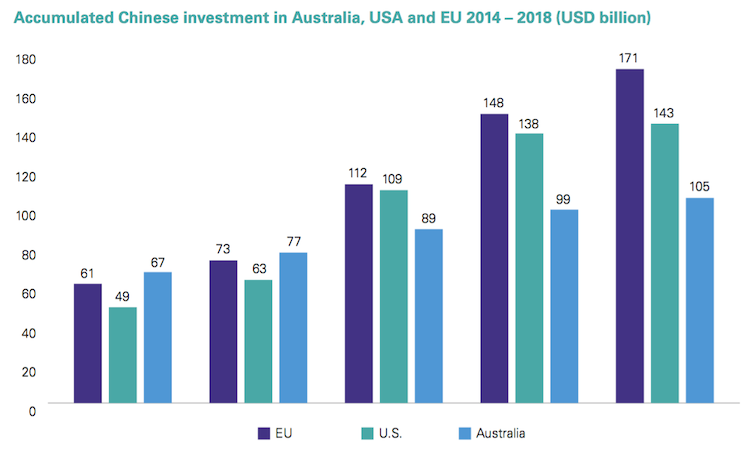 Accumulated Chinese investment in Australia, US and EU from 2014 to 2018 (US$ billion). KPMG & University of Sydney, Author provided (No reuse)

Australian governments, corporations and professional advisers need to consider what types of Chinese investments and investors are desired and actively welcome in Australia.

Our report points to areas where Chinese investment is in Australia’s national interest and benefits the global integration and competitiveness of Australian industries.

Health care is a key example. 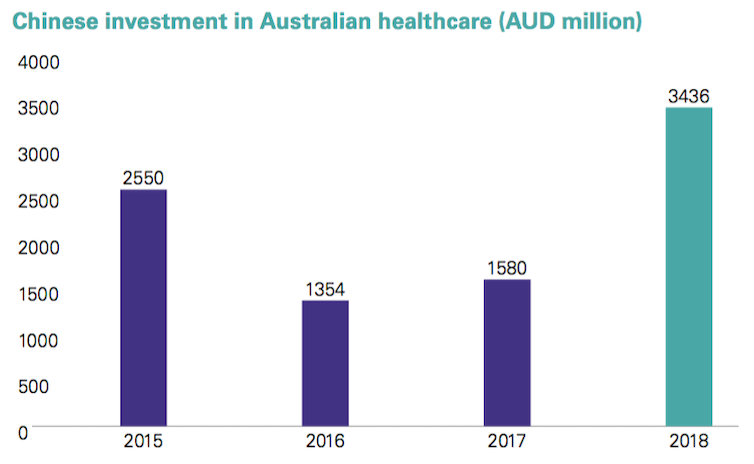 Chinese investment in health care companies has both provided capital for innovation and facilitated entry into the Chinese market.

Take the Chinese private equity firm CDH buying Sirtex Medical Ltd[2] for A$1.9 billion. Sirtex is an Australian medical device company with a treatment for liver cancer. Its acquisition enables expansion into China, which accounts for more half of the global incidence of liver cancer.

In mining, lithium provides an example of Chinese investment adding value. Tianqi Lithium[3] has invested A$700 million in a processing plant[4] in Perth. The plant will provide about 200 jobs and produce 48,000 tonnes of battery-grade lithium hydroxide for export.

Even in food and agriculture, which has generated much controversy over land acquisitions, we see room for advantageous investment processing and value-adding facilities, such as regional abattoirs.

Read more: Chinese-Australia relations may not be 'toxic', but they do need to keep warming up[5]

At a time of global uncertainty, Australian politicians, bureaucrats, business leaders, educational organisations and others must work quietly and respectfully with their Chinese counterparts to allay community concerns and consolidate Australia’s reputation as a welcoming and proactive partner.

The authors contributed to the Demystifying Chinese Investment in Australia Report.