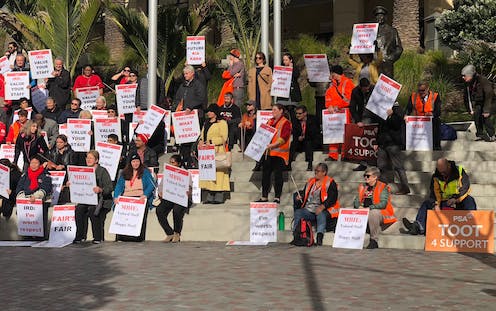 While official figures for 2018 have not been published yet, this represents the highest number of people involved in strikes since the late 1980s[3], and possibly the most working days not worked due to stoppages since 1992. For many strikers, it represents the first time they have participated in walkouts.

According to some, this strike wave was not supposed to happen. Trade unions were thought to be too weak to strike[4].

One employment relations textbook[5] asserted in 2009 that “strike action is seen increasingly as an inefficient and outdated strategy”. The Public Service Association (PSA[6]) secretary Erin Polaczuk recently argued that as unions today have become more feminised and mature[7], they have increasingly avoided “stupid oppositional behaviour”.

Nevertheless, women have led the strike wave. Women made up the majority of participants in most strikes, and female union delegates were often at the forefront of disputes. Indeed, stoppages have mostly occurred in majority female occupations such as teaching, nursing and government sector work in general.

It is as difficult to predict strike waves as it is to predict recessions. This is because both are the result of many complex causes, including the unpredictable nature of human agency. This wave is no exception.

Political factors help to partly explain the stoppages, but cannot be blamed solely for causing the unrest. In their classic 1974 study, Strikes in France[9], Edward Shorter and Charles Tilly[10] argued somewhat controversially that greater political opportunities produce strike waves. This view concurs with the opposition National Party’s attempt to pin blame for the strikes on the new Labour-led government because that government has raised expectations that wages will increase.

But when compared to another political factor, rising expectations and greater political opportunities seem to be a minor cause. That variable is how successive Labour and National-led governments since 1984 have been wedded to a neoliberal practice of tight government spending[11]. Even if Labour has somewhat loosened the government purse strings recently, it still strongly adheres to “fiscal responsibility” through its budget responsibility rules[12].

The level of government spending is a significant factor in causing the strikes simply because the government employs most workers who have gone on strike. Long-term neoliberal austerity[13] has caused public sector workers’ wages to fall well behind those of most others[14].

Economic factors (or political-economic factors) other than neoliberal cutbacks are also crucial. Academic research[16] generally regards economic variables as pivotal. Economist Ganesh Nana[17] has suggested that neoliberalism has suppressed wages for the vast majority of workers for a long time, leading to a low-wage economy[18].

Studies have found neoliberal politics and economics have mostly enriched those at the top[19] at the expense of the rest of the population[20]. According to Council of Trade Unions[21] economist Bill Rosenberg, labour’s share of national income has declined[22] from a peak of 71% in 1981 to 61% in 2016. At the same time living costs have risen, particularly in recent years due to rising accommodation costs[23]. Hence it seems this is a “catch-up” strike wave to reverse decades of stagnant or declining real wages.

This corresponds with theories[24] that strikes happen in “long waves[25]”, with strike peaks emerging after periods of subdued activity. Scholars like Beverly Silver[26] argue that increased exploitation and commodification of labour (such as under neoliberalism) can lead to a delayed, pendulum-swing counter-response. This rejoinder reflects shifting patterns of workplace bargaining power and class composition (such as the rise of white-collar labour and the “knowledge economy”).

Political and economic factors, long term or short term, cannot explain all. The subjective side of strikes is also important.

If we listen to strikers, they commonly claim they are being underpaid and overworked. Working in underfunded and understaffed occupations produces unrelenting and unhealthy high-pressure jobs. Being lumbered with more work for less or stagnant pay (in real terms) has caused much underlying dissatisfaction over the long term. This discontent has finally bubbled to the surface in the form of strikes.

Some fear that the strike wave of 2018, which looks set to continue into 2019 due to several recent junior doctors’ strikes, will mean a return to the strike-prone decades of the 1970s and 1980s. A major strike wave is probably unlikely given, among many other factors, the legal restrictions that outlaw most forms of strikes, including strikes outside bargaining periods between unions and employers, political strikes, solidarity strikes and wildcat strikes. Unions represented only 17% of the waged workforce[30] in 2017 and are concentrated in predominantly white-collar public sector unions that lack traditions of striking.

Finally, most recent strikes have been short-lived and have generally not occurred in economically strategic or vital industries. The strike wave would probably have far greater economic and political impact, for better or worse, if it spread to those working in key economic sectors, such as in the tourism, dairy and meat-processing industries, and in logistics and the financial sector. Yet it seems at this stage workers in most of these sectors are unlikely to strike, despite indications of a similar underlying discontent with wages and conditions.