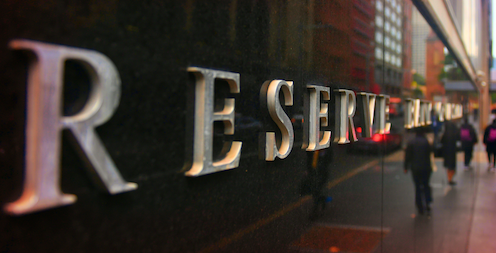 The Reserve Bank has just reported a loss of A$37 billion[1], the biggest in its history, and it says it will be unable to pay the government dividends for some time.

The announcement followed a review of its bond-buying program, one of the most important ways it supported the economy during the first two years of the pandemic.

In order to borrow to fund programs such as JobKeeper, the government borrowed on the bond market, issuing bonds on the money market that the Reserve Bank later bought with newly created money. That meant the Reserve Bank was, indirectly, the largest financier of the expanded budget deficit.

The review[2] concluded the bond-buying program worked relatively well. By aggressively buying $281 billion of bonds, the Reserve Bank was able to not only make sure government programs were funded, but also lower the general level of interest rates in the bond market, supporting the economy.

How did buying bonds help?

The review found buying bonds on the money market

This in turn helped lower the value of the Australian dollar by 1-2%, supported business investment, and encouraged consumers to spend, and boosted gross domestic product by a cumulative $25 billion.

What about the downsides?

The report found the Reserve Bank made a substantial loss on the bond-buying program, estimated to be as high as $54 billion. Its overall loss this financial year will approach $37 billion.

How can a bank make a loss when it is printing money[3]?

The answer is that it lost money by buying high and selling low – the opposite of traditional investment advice!

During the crisis investors fled to the safety of the Australian bond market, wanting to put their money somewhere safe: Australian government bonds.

This meant the bank bought bonds at high prices. As the economy recovered and investors ploughed their money back into the stock market and other more risky places, bond prices dropped, giving the bank an accounting loss on the bonds.

While the Reserve Bank doesn’t plan to sell the bonds (it’ll hold them until they mature), if it did, it would have to sell them for much less.

The bank is still perfectly capable of operating even if it loses money on investments. Being able to print money at will means it can’t go broke.

But it is unlikely to provide the government with a dividend from its profits for several years. Usually the bank makes a profit from printing money. The notes cost about 32 cents[5] each to print and it offloads them for as much as $50 and $100.

It will use this income to soak up the losses from its bond-buying program, and won’t need to ask the government for more.

Read more: The Mint and Note Printing Australia make billions for Australia – but it could be at risk[6]

This review confirms that bond-buying will remain an important part of the bank’s toolkit. While inflation today is soaring and interest rates are being increased at a breakneck pace, it is highly likely that at some point in the future the economy will go through a rough patch and need lower rates.

When the bank has cut its short-term cash rate to near-zero, as it did in 2020, it’ll need to do something else to bring down other longer-term rates.

It says it will buy bonds only “in extreme circumstances, when the usual monetary policy tool – the cash rate target – has been employed to the full extent possible”, but it concedes it may have to, and it believes what it did was worthwhile.`