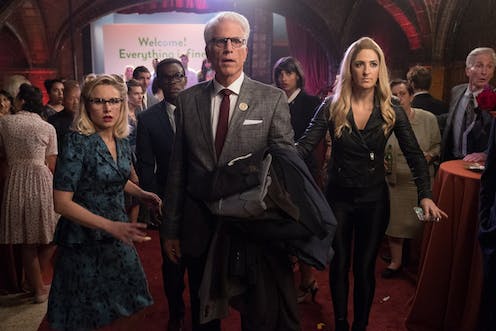 What does the American Netflix fantasy-comedy The Good Place[1] have in common with Australia’s banking royal commission?

The Good Place, in case you don’t know, is about a happy afterlife accessed through earning enough life points from good deeds (bad deeds get point reductions).

It’s an improbably successful television series that riffs off thorny ethical questions about what it takes to be a good person. Its third season has contemplated the ethics of intention, obligation and consequences.

Read more: Kantian comedy: the philosophy of The Good Place[2]

This is surprisingly similar ground to that covered by the royal commission’s final report into misconduct in Australia’s banking, superannuation and financial services industry.

“Everyday the world gets a little more complicated and being a good person becomes harder,” says Michael, the supernatural architect played by Ted Danson, in “The Tale of Two Dougs” (Season 3, episode 11).

The destinies of the two Dougs illustrate why fewer and fewer people are earning enough points to get to The Good Place.

Why? Because now the flowers are grown thousands of miles away, using fertilisers and pesticides that harm the ecosystem, picked by workers who are underpaid, and transported using vehicles that pollute the atmosphere.

The point: it is harder to know how to do good in a more complex, interconnected world. Now our actions have implications that ripple further. And ignorance is not a defence.

Good intentions are not enough

The royal commission’s final report says something to this effect in its tale of two bank boards – of NAB and Commonwealth Bank – that failed in their primary duty to police actions that ripped off customers.

“There can be no doubt,” the report states in its introduction, “the primary responsibility for misconduct in the financial services industry lies with the entities concerned and those who managed and controlled those entities: their boards and senior management.”

It’s a lot like second Doug not doing enough to avoid the harm of buying flowers online.

Obviously the royal commission has identified plenty of conduct that was simply bad behaviour – unconscionable misdeeds motivated by greed.

But it has also identified that those ultimately responsible for the mess of misconduct may be individuals devoid of malicious motivation.

These are hard-working executives and board directors who might have had the best of intention to do the right thing. Yet they they still failed to ensure ethical outcomes.

Life now is so complicated: Michael explains why the point system is broken.

What The Good Place suggests to us about individuals is also applicable to companies: it is getting harder to be good.

The bigger a corporation gets the more complex its business becomes. It is exposed to volatile markets and disruptive technologies. Its supply chains are likely to span the globe. There is so much more information to consider.

A century ago, for example, a company didn’t worry about its greenhouse gas emissions. Now carbon footprint affects a company’s public reputation, profitability and long-term sustainability.

As the Australian Stock Exchange’s Corporate Governance Council has pointed out, boards are increasingly called on[3] “to address new or emerging issues including around culture, conduct risk, digital disruption, cyber-security, sustainability and climate change”.

Yet they are relying on obsolete governance systems.

One of the organisations working on the new systems needed is Accounting for Sustainability[4], established by the Prince of Wales in 2004[5] to “ensure we are not battling to meet 21st century challenges with, at best, 20th century decision-making and reporting systems”.

Read more: Banking Royal Commission: no commissions, no exemptions, no fees without permission. Hayne gets the government to do a U-turn[6]

There are other initiatives around the world engaging in this challenge. But Australian companies are underrepresented. Better practices that exist are still not widely known here.

I’ve had the opportunity to discuss governance failings and potential improvements with hundreds of Australian and global corporate leaders, including directors from Australia’s ten biggest companies. Most of these organisations operate as “islands of excellence”. They are really good in parts, but can’t bring it all together.

Privately, directors acknowledge they can’t keep on top of the information, understanding and follow-through expected of them.

One member of a board of a big-four bank has told me of several billion-dollar transformation projects intended to correct these known problems that “haven’t made a difference”.

Getting the right information

Governance is important. “Without the right information,” the royal commission report rightly states, “a board cannot discharge its functions effectively.”

But it does not “offer any single answer to how boards can ensure that they receive the right information”. It merely asks leaders to “keep considering how to present information about the right issues, in the right way”.

We need to have a clearer remedy than that.

On The Good Place, central character Eleanor (played by Kristen Bell) has Chidi, a trained moral philosophy professor (played by William Jackson Harper), to help her become a better person and avoid The Bad Place.

Who will be our corporate leaders’ Chidi?

Read more: Hayne's failure to tackle bank structure means that in a decade or so another treasurer will have to call another royal commission[7]

At the Australian Institute of Performance Sciences[8] we’re working on a summit to bring together the top 50 corporate, investment and government actors in the Australian economy. They will be called on to collaborate in developing a better model of governance, akin to the way accounting and auditing standards have been improved over time. We will see what they choose to do.

Royal commissioner Ken Hayne has noted the “reluctance in some entities to form and then to give practical effect to their understanding of what is ethical, of what is efficient honest and fair, of what is the ‘right’ thing to do”.

The moral universe of the The Good Place damns those who fail see through the complexity of modern life. Corporations and their leaders guilty of the same failing warrant the same.