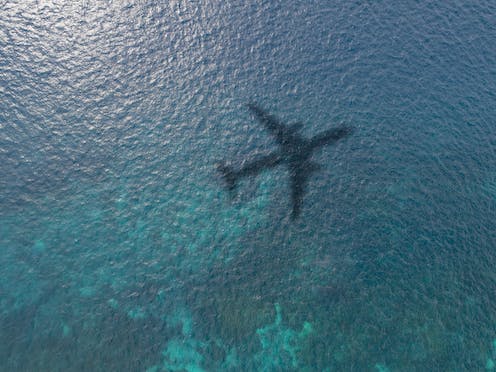 With Samoa fully reopening its borders on August 1, another Pacific country moved tentatively forwards after two years of border closures and little or no international tourism.

But opening up is not as simple as flipping a switch, given the many challenges facing Pacific aviation. Rising fuel costs, mounting debt, management issues and a shortage of pilots[1] have all plagued the industry in the region.

Climate change adds to these problems. Tourism aside, small island nations with very small economies, spread across a vast expanse of ocean, depend on high carbon-emitting air transport[2] for health, trade and family connections.

These days, most Pacific national airlines are being kept afloat by government loans and guarantees – and in Fiji’s case, workers’ pension funds. With Pacific Forum economic ministers meeting in Vanuatu from today, all these issues should be high on the agenda.

Unfortunately, difficult conversations about the management of national airlines were largely absent at the earlier Pacific Forum leaders meeting in Fiji in July.

This was despite the 2050 Strategy for the Blue Pacific Continent[3] “to protect and secure our Pacific people, place and prospects” laid out at the meeting. And it would have been disappointing to the ordinary taxpayers who have often supported their loss-making[4] national carriers.

In 2021, for example, the Samoan government clipped the wings of Samoan Airways over concerns about its ongoing viability[5]. The role of maintaining national prestige and pride in the form of an airline is still raised[6] in debates about the nation’s near bankruptcy in the early 1990s.

Now, with international borders reopening, Samoa Airways has announced it will no longer operate[8] long-haul flights to Brisbane, Sydney and Auckland – traditionally its primary sources of passengers and freight.

This may dampen hopes[9] of a rapid resumption of tourism, an industry Samoa depends on for around 25% of its GDP.

With Samoa ending leases on some of its aircraft, its close neighbour Vanuatu is reportedly[10] considering taking one of those planes as part of its own tourism development plans.

Kiribati, too, has invested in its fleet, acquiring two aircraft[11] as part of an apparent international tourism growth strategy[12]. Ironically, however, Kiribati pulled out[13] of the recent Pacific Forum meeting, joining Micronesian countries[14] that have also left the organisation.

Meanwhile, the region’s largest carrier, Fiji Airways (formerly Air Pacific), is caught up in controversy over changes in its ownership structure[15] that caught many off guard in mid-July.

In particular, the Fiji National Provident Fund’s acquisition of a major share of the airline has been criticised by opposition MPs and union leaders for exposing the retirement fund’s members to a struggling enterprise.

Read more: Pacific tourism is desperate for a vaccine and travel freedoms, but the industry must learn from this crisis[16]

In 2020 the airline laid off large numbers of staff[17] as it dealt with the fallout from the pandemic. And there have been calls for greater transparency[18] in its operations. In 2021, Fiji’s former prime minister Mahendra Chaudhry called the airline[19] a “noose around the necks of the taxpayers” after it took a FJD$130 million loan from the Asian Development Bank.

In an unprecedented move, Fiji Airways has now also taken over management[20] of Airports Fiji, a move the Association of South Pacific Airlines (ASPA) described[21] as “very unusual” and a potential conflict of interest[22].

Read more: Pacific Islands are back on the map, and climate action is not negotiable for would-be allies[23]

A ‘sense of urgency’

None of these systemic issues are entirely new. While cooperation has historically brought benefits for Pacific nations, tension between regionalism and nationalism[24] has also hampered a coherent aviation strategy.

In July, however, Pacific aviation ministers endorsed a new aviation strategy[25] aimed at ensuring “a safe, secure and sustainable aviation system” for the region. It is to be hoped this initiative works, despite the region’s many competing priorities, political uncertainties and shifting allegiances.

But the current political divisions[26] over Micronesia’s place within the wider Pacific family suggest these challenges will remain for some time.

Pacific Forum economic ministers meeting in Vanuatu today and tomorrow have already said[27] “the sense of urgency is very real”. Their discussions about “resilient economic recovery and stability” should include the role of regional aviation in achieving those goals.

Any realistic strategy for a “blue Pacific continent” must involve the good governance, cooperation and viability of sustainable airlines[28] so they can connect nations across that vast expanse of ocean for generations to come.