Labor is going into the election promising to tax capital gains more heavily. Depending on who you listen to, it’ll either hit the very highest of earners, or middle earners – people such as teachers and nurses. The same critics have claimed different things at different times.

What are capital gains?

Capital gains are the profits made from buying something at one price and selling it at another. These profits are typically taxed at only half the rate of other income[1]. (Technically, only half of each capital gain is taxed.)

The discount, introduced by Prime Minister John Howard[2] in late 1999, was sold as ensuring that profit takers wouldn’t be taxed on the workings of inflation, a concession that was already built into the system, although in a more complicated way.

But because inflation had fallen so dramatically, the 50% discount went much further. It taxed capital gains, so-called “unearned income”, at a much lower rate than income earned in the form of wages and salaries, and also at a lower rate than bank interest and other forms of income.

In the lead up to the coming election (and the last one) the Labor Party has promised to wind back the discount, cutting it from 50% to 25% for newly-purchased assets held for more than a year, meaning that for those assets three quarters[3] of each gain will be taxed instead of one half.

There are two (apparently contradictory) views about who the changes will hit, both of them spelled out in the pages of The Australian, and both sourced to the treasurer Josh Frydenberg.

On January 5 the treasurer said investors would pay the “world’s highest tax[4]” under Labor’s changes.

Mr Frydenberg quoted a rate of 36.75% for capital gains tax, which would be three quarters of 49%, which itself would be made up of the top marginal rate of 45% plus the 2% Medicare levy plus the 2% temporary budget repair levy that Labor plans to reintroduce for two years.

That top marginal rate only applies to Australians on more than A$180,000.

Then ten days later on January 15, Mr Frydenberg said most of the workers hurt would be on much lower incomes, of up to A$80,000.

But he didn’t address the treasurer’s contention that most of the beneficiaries are lower earners.

What the data says

The Australian National University’s microsimulation model of the tax and social security system, PolicyMod[5], and the Australian Tax Officie’s Taxstats 2015-16[6] enable us to get at the truth.

Using a 2% sample of the tax returns submitted, including the information about capital gains and capital losses, we are able to work out who is the hardest hit by capital gains tax by income, age and gender.

At first blush we find that almost all capital gains tax collected - 85% - is paid by the top 10% of income earners. The bottom 10% (and also the bottom 20%) pay nothing.

It shouldn’t be surprising. High earners pay more tax than low earners because they earn more. The top 10% of earners also pay 51% of personal income tax.

But after taking losses into account, the number reporting net capital gains falls to 670,000. Only about 540,000 of them pay capital gains tax. The others have taxable incomes below the tax-free threshold.

Small in number though they are, the Australians in the top 3% who pay capital gains tax, pay 74% of it. They pay 30.7% of all personal income tax.

Older Australians pay only 5.6% of all personal income tax but about 29% of all capital gains tax.

Surprisingly, partnered women are also over-represented, paying 19.4% of personal income tax but an outsized 28.7% of capital gains tax. This is what you would expect if couples planning to minimise tax put the asset they were planning to buy and sell in the name of the lower paid partner.

Persons with wages and salaries are underrepresented, paying around 88% of personal income tax but only around 47% of capital gains tax.

But these figures are misleading. 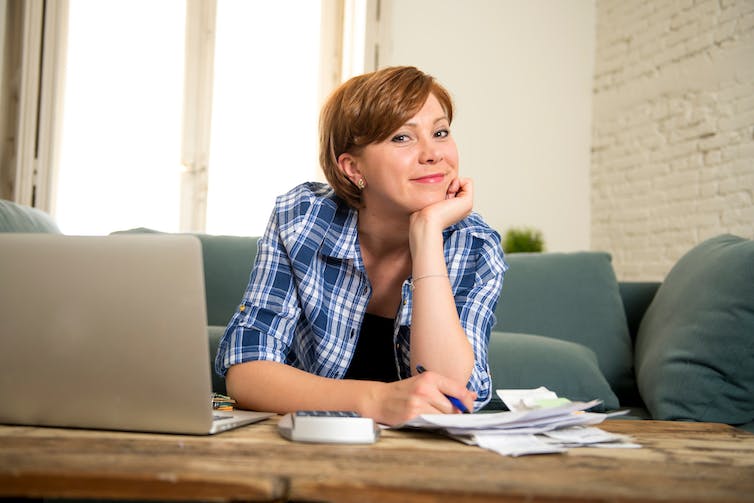 It gets stranger still

An alternative measure would be to rank people by their taxable income after deducting their capital gains. It’d rank them by something more like their normal income.

When we do that we find that the share of capital gains tax paid by the top 10% of earners is nothing like the 85% we first found. It’s a much lower 38%.

The bottom 10% turn out to pay, not none of the capital gains tax collected as we had thought, but an overweight 20%.

Stranger still, the next-bottom 10%, the people who fit somewhere between the bottom 10% and the 20%, pay only 4% of the capital gains tax collected.

And they are indeed odd.

The bottom 10% claim an awful lot of capital gains - an average of A$161,000 per capital gains tax payer, which is more than that claimed by any other income group, including the top 10%.

Capital gains make up a large share of their taxable income, larger than for higher income groups, and far lower than for other low income groups. Only around 8% receive government pensions or allowances.

Although their taxable incomes, after deducting net capital gains, are in the bottom 10%, their actual wealth and living standards are likely much higher up the distribution. Many own shares and businesses or have negatively geared investment properties. They get dividend imputation cheques and report business losses.

To get closer to the unvarnished truth, we would need to compare capital gains by household, examining the combined income of each household, which is less easy to manipulate than the income of an individual. But Australia’s tax system is built around individuals, so it’s hard to do. We would also like to know more about their typical income and whether capital gains were likely a one off or something more permanent.

Here’s what we can say:

Labor’s change will “grandfather” existing assets, meaning they will continue to be taxed under the present, more generous, arrangement. This means Labor’s change won’t have much of an effect for years, making any simple guess of how much money it makes an overestimate.

At the moment, personal taxpayers pay A$6.7 billion per year in capital gains tax. Labor’s changes could potentially reap half that amount, but they would build up to it slowly, and by the time they got there, fewer people would look for capital gains as a means of escaping tax, meaning they would never get there, and giving a boost to other kinds of tax revenue.

It’s pretty certain that those who would feel it most would be higher income earners, older Australians, partnered women, quite often on behalf of their higher income partner.