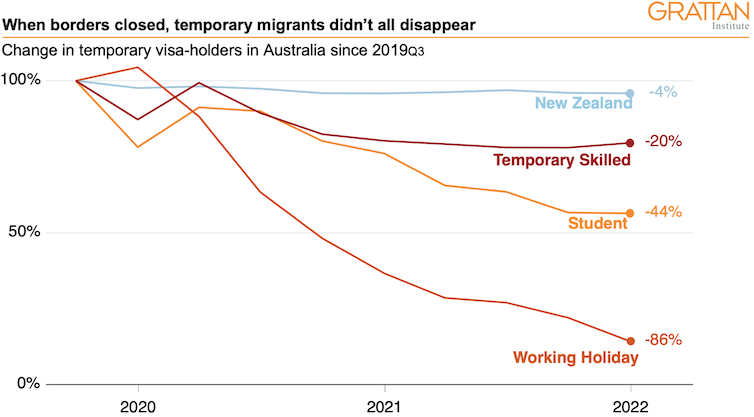 COVID-19 travel restrictions brought migration to Australia to a virtual standstill, and over the course of the pandemic about 500,000 temporary migrants have left our shores. Now many Australian businesses are screaming out for more workers.

So, who are Australia’s missing migrants, where did they work, and when might they come back?

Which migrants are missing?

The Grattan Institute’s new report, Migrants in the workforce[1], shows there were about 1.5 million temporary migrants in Australia as of January 2022, compared with almost 2 million in 2019.

The number of temporary skilled workers is down by about 20%. Almost all of the 660,000 New Zealand citizens living in Australia on temporary visas remained throughout the pandemic.

Department of Home Affairs This shortfall of migrants from the uncapped temporary migration program is hurting some businesses more than others. Before the pandemic about 17% of workers employers hospitality were here on temporary visas. These temporary migrants were overwhelmingly international students earning some money as waiters, kitchen hands and bar attendants.

Grattan analysis of ABS 2016 census Demand for these services remains high, so it’s little wonder employers in the hospitality industry are screaming out for staff. The most recent data from the Australian Bureau of Statistics shows about 33% of hospitality businesses in February were advertising for extra staff[2], compared with 15% in February 2020. Meanwhile farmers are struggling because working holiday makers, who have made up about 4% of the agricultural workforce, are almost entirely absent. Border closures have boosted wages where temporary migrants typically work Some commentators, such as Australian Council of Trade Unions head Sally McManus[3] have attributed Australia’s historically low unemployment to the border closures. Closed borders may well have boosted the employment prospects and wages of locals in sectors where temporary migrants – especially students and working holiday makers – have made up a large share of the workforce. That’s likely to have benefited younger Australians, especially those working in hospitality.

Demand for hospitality services is driven by local customers. Brendon Thorne/AAP But the fact there are fewer migrants in Australia now than before the pandemic is unlikely to have had much impact on the employment prospects and wages of Australian workers overall. When migrants come to Australia, they spend money – on groceries, housing, transport, hospitality and so on. Fewer migrants means less of that spending, which means less demand for labour to make those goods and provide those services. Grattan Institute research published in Febuary[4] shows government spending and the Reserve Bank’s stimulus policies, not border closures, are the main reason for the the low unemployment rate. Our analysis[5] shows the effect record low interest rates and unprecedented levels of government support for businesses and households is seven to eight times larger than the effect of the border closure. Read more: A myth that won't die: stopping migration did not kickstart the economy[6] Whoever wins the federal election should resist the temptation to make permanent changes to visa policy The federal government has implemented short-term measures to attract international students and working holiday makers back to Australia. It is refunding the application fee to those applying for such visas, and has removed the 40-hour per fortnight cap[7] on working hours for international students.