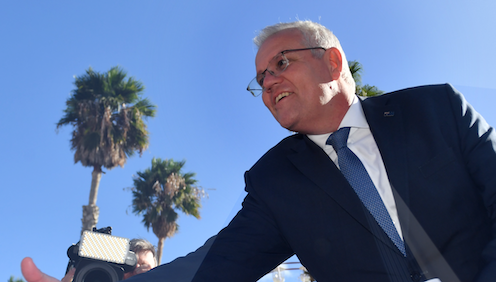 In the midst of Labor’s campaign about the cost of living[1], the Coalition has zeroed in on one of those costs – taxes – and guaranteed to stop them rising. Its Lower Tax Guarantee[2] promises:

In addition, the Coalition promises to continue to adhere to its taxation “speed limit” by keeping tax revenue below 23.9% of gross domestic product.

Labor, fearing its tax policies cost it the last election, isn’t mentioning tax much, and is backing the Coalition’s already-legislated Stage 3 tax cuts[3] aimed at Australians on more than $90,000, and due to start in mid-2024.

As it happens, most Australians are due to pay a good deal more tax from mid next year when the Coalition’s Low and Middle Income Tax Offset[4] ends.

Actually, we will need more tax

One of the problems with the pledge is that we are likely to need more tax.

Even on optimistic assumptions about productivity growth set out in the budget, the deficit – the extent to which revenue falls short of spending – is projected to be an usually high 3.4%[5] of GDP next financial year, followed by 2.4%, 1.9%, 1.6% and then continuing without disappearing thereafter.

Budget deficits were an appropriate response to the pandemic.

But, as the Coalition keeps reminding us, unemployment is now just under 4% and set to fall lower, which means we might be at what the authorities call “full employment”, or so close to it the difference hardly matters.

The presumption that from now on Australia should aim for a balanced budget is baked into the budget fiscal strategy[6] that targets “a budget balance, on average, over the course of the economic cycle”.

The continuing deficits the budget is forecasting risk aggregate demand (private and government spending) exceeding what the economy is able to produce.

In the coming year the budget forecasts an increase in aggregate demand of 4.5%, unmatched by the increase in Gross domestic product of 3½%.

The result is likely to be a budget-driven increase in inflation, at a time when the Reserve Bank is trying to ward off a surge in (largely foreign-produced) inflation.

Realistically, sound management requires the incoming government to balance the budget, if not straight away, then at least by 2023-24.

Failure to balance the budget will result in unacceptably high inflation and increasingly severe action by the Reserve Bank to restrain it, with damaging consequences for living standards.

There are only two ways to balance budgets: cut spending or increase revenue, and the biggest source of government revenue – by far – is tax.

The Morrison government has committed itself to an arbitrary tax ceiling that limits total taxation revenue to 23.9% of GDP, forevermore.

Labor is not committed to such a ceiling and nor does it talk much about appropriate levels of tax.

The reality is that according to the latest Treasury and Department of Finance projections, government spending will settle at 27.2% of GDP in ten years time, well above the tax ceiling.

The government is also guaranteeing essential services[8], but many are hugely underfunded, examples include:

Certainly, there are opportunities for budget savings, starting with electorate giveaways and dodgy infrastructure projects that have no business case. But realistically, these savings will fall well short of what’s needed to fund the extra spending we are going to have to make.

In short, guarantees of both the provision of essential services and lower taxation are incompatible. No party can credibly promise both.

Read more: Of the 4 economic wildcards between now and voting day, the first is CPI[9]

What this election needs is a debate about the best way to raise the needed revenue, followed by a full-scale review of taxation after the election.

The starting point should be to work out how much extra revenue is required.

A rough estimate is an extra 4% of GDP. While that might seem like a lot, it would leave Australia as one of the lower taxing countries in the OECD. It hasn’t hurt the OECD’s prospects.