Victoria’s Labor government stole a march on the rest of the country last month becoming the first (and only) state government to sign a memorandum of understanding with China under China’s Belt and Road Initiative.

Belt and Road[1] is China’s ambitious plan to lend money to improve infrastructure and other links between it and about 70 other nations that together make up more than 60% of world’s population.

The Australian government has refused to sign at the federal level where it could have used Belt and Road money to help develop the north. It did this in part because of concerns about China’s strategic intentions. Labor says it is more open to signing[3].

There’s not much in it

When it signed it in October, Victoria’s Labor government refused to release the text, but it has since done so under pressure ahead of Saturday’s state election[4]. 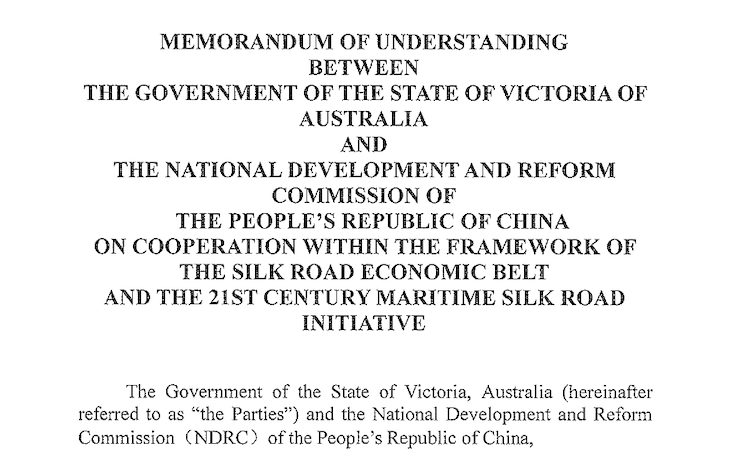 The memorandum Victoria’s government has made public. Government of Victoria[5]

At first glance, there isn’t much in it, apart from a series of motherhood statements espousing cooperation:

The parties will work together within the Belt and Road Initiative, with the aim of promoting connectivity of policy, infrastructure, trade, finance and people, so as to seek new opportunities in cooperation and inject new momentum to achieve common development to strive to develop an open global economy, jointly combat global challenges and promote the building of a common future.

Also, the agreement makes clear it is not legally binding.

There are risks nonetheless

But the memorandum itself is the equivalent of hanging out a sign saying Chinese infrastructure investment is welcome.

On signing it, Premier Dan Andrews boasted that in four years he had “more than tripled Victoria’s share of Chinese investment in Australia, and nearly doubled our exports to China”. He sees Victoria as leading the development of closer links between the Australian and Chinese economies.

One risk is that Victoria will get projects that don’t pass cost-benefit analysis, a concern overseas[6].

Another is excessive debt accumulation by Victoria, also a concern overseas where it has led to strategic assets falling into Chinese hands[7].

Read more: Will an ambitious Chinese-built rail line through the Himalayas lead to a debt trap for Nepal?[8]

In August the current Prime Minister of Malaysia, Mohathir Mohamed cancelled[9] a US$27 billion East Coast Rail Link project and two other pipeline projects that his predecessor had signed as part of the Belt and Road Initiative.

He went further, speaking of “a new version of colonialism”.

And they mightn’t be our workers

Another concern is the large scale use of imported Chinese labour.

When read alongside an earlier memorandum of understanding signed as part of the China Australia Free Trade Agreement over the use of Chinese labour on infrastructure projects funded by Chinese partners, it would appear to allow the employment of an unlimited number of Chinese workers[10].

This memorandum signed between the Commonwealth government and China as part of the free trade agreement is lax. It includes no requirement for labour market testing.

Because of the difference in wage rates paid to Chinese and Australian infrastructure workers that would remain even after the imposition of the minimum wages required by the memorandum, the Chinese partner would have a strong incentive to employ Chinese workers.

Read more: FactCheck: could foreign workers be paid less under the China-Australia FTA?[12]

It could mean that although Australia would get the infrastructure, it would miss out on employing Australians to build it.