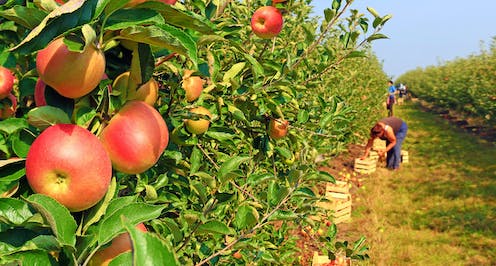 Australia has been built on immigration. In recent years it has been skilled migration, and that will continue to be important to us, especially as we recover from the COVID economic malaise.

Skilled migrants are offered visas that can lead to permanent residency, whereas those with lesser skills are normally only offered visas without such pathways.

As we emerge from the COVID crisis, groups such as the Grattan Institute[1] have been calling for an even greater focus on skilled migration, saying it will deliver us Australians who are younger, smarter and richer.

But COVID has underscored how much we also depend on low-skilled[2] workers, especially in agriculture, hospitality, aged and disability care and construction.

Shortages in aged care alone are projected to approach one million[3] by 2050.

Ageing means all types of workers will become more scarce. The 40-year projections in this year’s Intergenerational Report have the number of working-age Australians for each Australian aged over 65 shrinking from four to 2.7[4].

(Though the projection is less dramatic than presented. The ratio of working Australians to both older and younger Australians of dependent age is expected to decline more modestly[5] over the 40 year period, from 1.8 to 1.6.)

Similar falls[6] in the ratio of workers to dependants are expected in much of Europe and in Japan, Korea, Singapore and China, meaning Australia will face competition for workers.

Things are starting to move. The recently announced Agricultural Visa[7] will give migrants from the UK and the ASEAN region who want to work in agriculture, fisheries and forestry sectors a pathway to permanent residency.

The Joint Standing Committee on Migration[8] has recommended the temporary skilled workers (visa subclass 482) also be given a pathway to permanent residency and that it be made easier in regional areas.

Japan[9], which has traditionally made migration difficult, is offering skilled migration pathways for foreigners without tertiary degrees in occupations including agriculture, aged care and construction.

These were previously seen as unskilled or semi-skilled occupations. After five years, workers on these visas will have their skills assessed and can apply to become permanent residents.

While the impact of this scheme is too early to assess, the important point is that there is public support[10] for it in Japan. People there now recognise “the country would not be able to sustain its industries, social security system and cultural heritage without admitting migrants with a broader range of skill sets”.

The post-pandemic era provides a rare opportunity for Australia to rethink its migration system. The Japanese case study warrants a closer look at how we define skills and shortages and the balance between the type of workers we want.

There’s a looming war for manual and low-skilled labour.

Asian countries and those in the Middle East have for decades sourced their low-skilled labour from South-East Asia and South Asia[11]. Australia has done it through the Seasonal Worker Programme[12] and the Pacific Labour Mobility Scheme[13].

Read more: Why yet another visa for farm work makes no sense[14]

There are risks that the Agricultural Visa could undermine[15] these existing schemes and bring with it challenges in protecting the rights[16] of the workers who take it up.

But it’s a battle we might have to be part of. Migrants of all kinds have served us well in the past. We are likely to need those we are used to calling “low skilled” as well as those with high skills in the future.