For Australia’s habitually-abused financial consumers it’s Back to the Future (minus the DeLorean[1]).

Treasurer Josh Frydenberg appears to have thrown the most important findings of the banking royal commission under a bus, in glorious double-speak.

On Thursday he issued a direction to the Australian Securities and Investments Commission through what is known as a statement of expectations[2].

It is very different from the previous such statement, issued in 2018[3].

This one includes an entirely new clause, placed right at the top.

The government expects ASIC to:

identify and pursue opportunities to contribute to the government’s economic goals, including supporting Australia’s economic recovery from the COVID pandemic.

It’s an odd role for a corporate cop, on its face inconsistent with the way ASIC itself describes its function in the “our role[4]” tab on its homepage.

Perhaps not yet updated[5] to take account of the guidelines, ASIC’s description says it is a regulator whose job is to “take whatever action we can, and which is necessary, to enforce and give effect to the law”.

From ‘why not litigate’…

It’s how the royal commission saw ASIC’s role. In his final report, Commissioner Kenneth Hayne[6] was scathing about how ASIC carried out those duties, saying it was too ready to negotiate, and not keen enough to litigate.

Financial services entities are not ASIC’s ‘clients’. ASIC does not perform its functions as a service to those entities. And it is well-established that ‘an unconditional preference for negotiated compliance renders an agency susceptible to capture’.

Negotiation and persuasion, without enforcement, all too readily leads to the perception that compliance is voluntary. It is not.

Hayne said the first question ASIC should ask whenever misconduct was identified was “why not litigate?[7]”.

Frydenberg’s new statement of expectations turns that on its head.

…to ‘why not capitulate’

Rather than “why not litigate,” it reads as “why not capitulate” — justified by the need to identify opportunities to contribute to Australia’s economic recovery.

The statement says the government expects ASIC to “act independently” but also says it should “consult with the government and treasury in exercising its policy-related functions” — a requirement not previously expressed in those terms.

Read more: Pro tip for Australia's banks: imagine you are in Canada[8]

It should “minimise regulatory burdens” (including presumably those that require regulated firms to act in the best interest of their customers).

It should ensure any guidance it offers to financial service providers is not “unduly prescriptive”.

The banks have not earned leniency

Granted, these are conditions that could be interpreted positively if ASIC was charged with supervising an industry that had demonstrated its trustworthiness and its commitment to putting its customers first. 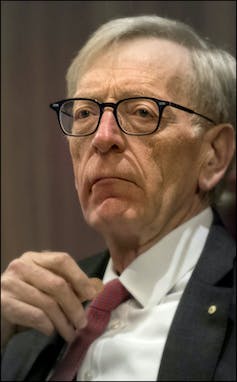 Royal Commissioner Kenneth Hayne believed the banks had not earned out trust. AAP

But after the evidence that was ventilated before the Hayne Royal Commission no one – not even the Australian Banking Association[9] makes such a claim.

Indeed, the damage done by more than a decade of financial industry misconduct, fraud, criminality and venality, committed on an industrial scale, is yet to be fully quantified.

Colleagues at the University of Melbourne estimate the full cost at north of A$200 billion[10], affecting approximately 54% of the population.

Frydenberg’s solution appears to be to put the needs of industry first. Separately, he is trying to scrap responsible lending laws[11].

From somewhere, to nowhere

What will the upshot be of a newly enfeebled ASIC? In light of the demonstrable failure of banks, super funds and insurers to act with integrity after the royal commission, the upshot will be more of the same.

Indeed, as reported in The Klaxon[12] in November, the almost one million customers in Westpac-BT’s “retirement wrap” umbrella fund had been gouged as much as $8 billion over the past decade, thanks to exorbitant fees.

According to Australian Prudential Regulation Authority data, had the performance of the Westpac funds been merely average, its customers would have been $5 billion better off.

Read more: Why bank shares are climbing despite the royal commission[13]

The matter was reported to ASIC on November 23 last year. All ASIC has done since is “review” the situation. In that time fund members might have lost a further $1.5 billion relative to the industry average.

A better way to support a post-COVID economic recovery would be to give customers confidence that the laws meant to protect them were being properly enforced. It isn’t the road the treasurer has taken.