The testimony[1] from Reserve Bank of Australia governor Philip Lowe to the House of Representatives’ Standing Committee on Economics[2] last week seemed familiar.

The committee’s deputy chair, the Labor Party’s Andrew Leigh, asked Lowe a series of pointed but important questions. Lowe tried to duck them, with limited success.

The most interesting exchange concerned the possibility of a wholesale review of the central bank by outside parties.

Leigh referred to a series of articles about the bank by journalist Shane Wright[3] that note the bank and its policy objectives haven’t been reviewed in 40 years.

Many were calling for a fundamental review of monetary policy, Leigh said. Such reviews had been done by the US Federal Reserve, the European Central Bank, the Bank of England, the Bank of Canada, the Bank of Japan, the Reserve Bank of New Zealand and Germany’s Reichsbank. He asked Lowe:

Would you support a review of monetary policy, a review into the RBA?

When people say that there should be a review of the Reserve Bank, I’m not sure what they’re calling for — a review of the legislation, the mandate, the way the government appoints people to the board, the type of people they put on the board, or how we’ve done our job; we haven’t done our job effectively. All those things get conflated.

The obvious response to this is: so what?

Reviewing the job the RBA has done — or failed to do — seems entirely appropriate from time to time. Who the government appoints to the board and why could also do with a little scrutiny.

What Lowe called “conflated” reasons I think are all good reasons. 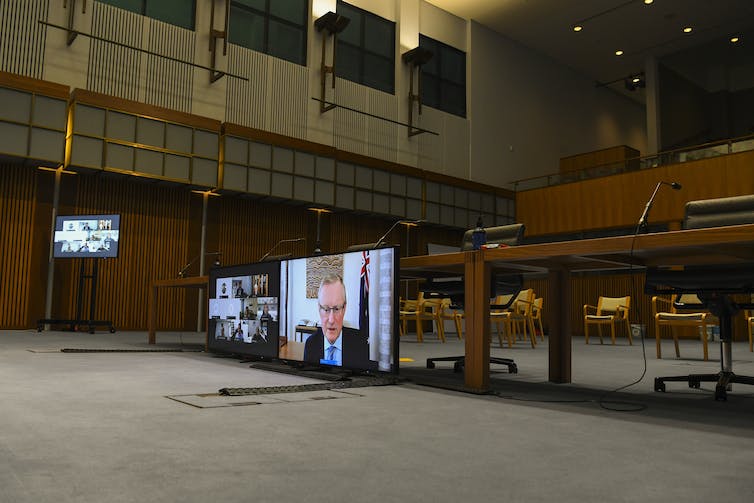 Reasons to review the central bank

Lowe went on to ask (rhetorically):

I just wonder, when people want a review, what they actually want to review — other than that they’re not happy with the decisions we’re making.

Following this, Leigh was perhaps a little too polite, pivoting to questions about what is minuted in RBA board meetings.

Being less encumbered by such considerations, I would have replied to Lowe’s question as follows.

I want a review into whether the inflation-targeting regime is still preferable to a nominal GDP target.

I want a review into the degree to which dissenting views are aired in board meetings. I want your international peers — like former governors of the US Federal Reserve — to tell how the RBA can serve the Australian people better.“

Steward to the nation

On one level, I understand Lowe’s opposition to a review. Nobody enjoys a performance review all that much. Even less so when it’s likely to highlight some "areas for improvement”.

But Lowe is wearing two hats.

His first hat is as governor of the RBA, responsible for its successes and failures while he’s in the chair.

He’s responsible for taking too long to cut interest rates from the 1.5% level they were stuck at for meeting after meeting. He’s responsible for saying bizarre things from time to time, from innocuous “off-piste” comments about light rail[5] to flat-out incorrect statements[6] about migration having suppressed wages. This is something that someone with a PhD from MIT ought to know better about, particularly given the research contradicting the claim presented at the RBA’s own conference in 2019[7].

His second hat is even bigger, as the steward of one of Australia’s most important economic institutions. In the same way the Chief Justice of Australia not only writes opinions but is a steward of the court, the RBA governor has a broader responsibility to the nation.

You would need go a long way to find someone more opposed than me to agendas like that of the so-called “Democratize the Fed[9]” movement. But that doesn’t mean I think the RBA could not be more democratically accountable.

The RBA rightly has a strong degree of independence. It needs that to make credible policy. But that doesn’t mean it’s infallible.

That would, ironically, do the most to reduce the amount of criticism it receives.