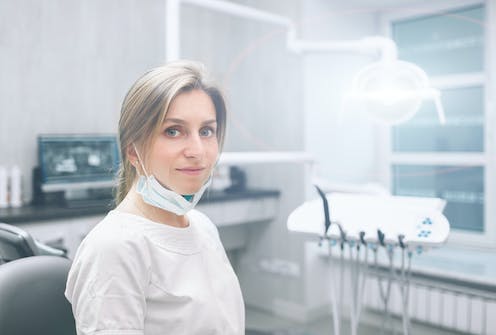 In the late 19th century, a very small percentage of Australians in the workforce – around 3% – worked in professional occupations like law, medicine, engineering, accounting and teaching. By the end of the 20th century about 40% were professionals.

We are often told that women were excluded from this process. This leads to the impression that women lawyers, doctors and engineers are an artefact of progressive reform. But the story is more complicated than that.

In the first half of the 20th century all of the professions increased at a greater rate than the rest of the labour force. The economy was changing in ways that demanded more accountants, engineers and journalists. Scientific advances encouraged increased health care. And education of the whole population was increasingly necessary, requiring more teachers.

These were not the traditional professions, like law and medicine. Rather, as a result of increased expectations for scientific health care and the growth of compulsory schooling, nursing and teaching grew far more rapidly than all the others.

The rise of women professionals

There were women professionals in almost all fields, though women dominated in areas that drew on women’s traditional authority over what an older middle class defined as the “domestic sphere”.

Women had always worked. Work performed by both men and women once took place at or near the family home. Gradually, as work industrialised, it moved away from the home and into spaces dedicated to work. This occurred earlier for men than for women, which is the process that created a separate sphere, and left women in it.

Read more: Women are dominating employment growth, but what sort of jobs are we talking about?[2]

But as the economy professionalised, middle-class women saw opportunities to build a professional sphere for themselves. Nursing and teaching drew on the work that women had always done – caring for the sick and teaching children.

For some women, this also gave them the authority to become medical practitioners. Women, not men, had traditional responsibility for health care, the earliest women doctors argued.

Does this mean women were not disadvantaged after all?

Even though they had a significant place in building professional work, women were nevertheless disadvantaged. The new middle class that emerged with the growth of the professions was based on a hierarchy. Women always clustered at the bottom of that hierarchy.

When they carved out professional spaces for themselves, those professions were often the first – like nursing and teaching – to suffer cuts in pay and conditions.

Women medical practitioners often started their own hospitals, just so that they had opportunity to practise.

When new regulations[3] clamped down on dentistry, the number of dentists reported in the census fell by 44% – but the decline in women dentists was 90%.

A similar thing happened later on to women accountants. During the Great Depression, women were also less likely to be granted opportunity to work in professional occupations. Some professions, like teaching, instituted explicit “marriage bars”, which kept the number of women down.

How this helps us understand class

British historian E.P. Thompson once famously said[4] that “class is a relationship, not a thing”. And like all relationships, this one’s complicated.

The hierarchy of the professional middle class is based at least nominally on merit. This helped middle-class people believe that they earned their status.

As the professions emerged, middle-class women objected that they did not have the same opportunities to earn a place in the hierarchies as middle-class men. There are many examples from the 1850s to the present. In 1911 for instance, a group of women published[5] information about women professionals in order to complain about lack of opportunity for married women.

They were right, though women activists rarely pointed out that while most women were excluded from elite professions, so were most men. Middle-class women believed they deserved access to the professions because, like the men in those positions, they were middle class.

This helps us to see that gender equity was not just about opening up the professions to women on the basis of merit. Access to professional employment has always been about class background, as well as gender.

When we are planning education and other programs, we need to remember that while merit supposedly regulates professional hierarchies, it is not the only thing at work. Making access to professional employment fair for everyone means we need to take class into account, too.