The intergenerational reports are former treasurer Peter’s Costello’s fiscal future-proofing scheme — a five-yearly reminder that, without action, an ageing population and other changes will leave public finances looking ugly.

The fallout from COVID means Monday’s 2021 report projects a bigger sea of red ink than the previous 2015 report. It’s a useful reminder that lifting productivity, reforming age-based tax breaks, improving migration and confronting climate change are crucial to leaving a happier legacy for the next generation.

Let’s start with the bad news.

It’s what happens when ageing population hits up against highly age-skewed spending and tax policies.

The 40-year budget projections look nasty, but the reality is almost certainly worse, because the intergenerational report is too rosy on crucial assumptions.

Projections worse than they look

First, the report assumes productivity will grow at 1.5% per year over the next 40 years, in line with the 30-year average. That’s highly optimistic. Productivity did indeed go gangbusters in the 1990s, growing at 2.2% per year. But in the 20 years since growth has been more sluggish at 1.2%, and under 1% for the past five years.

The same is true of other advanced economies. Structural shifts including slowing technological change, the rise of less-productive service sectors, a reduction in job switching and increases in market concentration are slowing productivity growth almost everywhere.

Read more: Why productivity growth stalled in 2005 (and isn't about to improve)[1]

Many of these headwinds are here to stay, which means an awful lot would need to go right to boost productivity in coming decades, including the unleashing of a new era of technological transformation.

Another big source of misplaced optimism is failure to quantify the impacts of climate change. It simply makes no sense to project fiscal outcomes over 40 years without an attempt to factor in the high and growing costs of a warming planet.

The NSW[2] intergenerational report, released only three weeks ago, didn’t shy from that challenge. 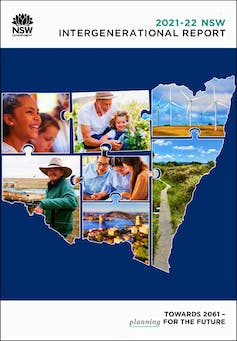 NSW properly considered climate change[3] It found that more severe natural disasters, sea level rises, heatwaves, and declining agricultural production would reduce incomes in NSW by A$8.3 billion a year in 2061 under a high-warming scenario compared to a lower warming one. Treasurer Frydenberg said on Monday that the role of intergenerational reports was to deliver “sobering news”. That’s half of their role. But they should also galvanise policy action. There are many choices governments can make to put the nation on a better path. There’s much we can do First, they should do what is within their control to boost productivity. This means working through the many positive suggestions from national and state productivity commissions[4], the Grattan Institute[5] and others to revitalise our health and education systems, improve our tax system, fix planning regimes and make more sensible infrastructure choices. Second, governments should lower barriers to workforce participation for women and older Australians by making childcare more affordable, improving paid parental leave, and revisiting the pension access age and superannuation preservation age. Read more: Aged care, death and taxes after the royal commission[6] Third, it should wind back the policies that supercharged the effect of the ageing population on government finances. Tax-free superannuation income in retirement, refundable franking credits, and special tax offsets for seniors mean we now ask wealthy older Australians to contribute a lot less than we did. We tax seniors too lightly An older household earning $100,000 a year pays on average less than half the total tax of a working-age household earning the same amount. The intergenerational report makes clear that this is not sustainable, yet successive governments have been reluctant to shift the dial. Fourth, we should embrace the benefits of migration. Reorienting our skilled migration program to focus on long-term economic potential, especially by giving priority to younger, more skilled workers, would better support the ageing population and generate a substantial fiscal dividend, helping defray some of the costs of population ageing. Read more: Skill shortages are no basis for picking permanent migrants[7] Finally, we’ve got to fill the federal policy vacuum on climate change. In the absence of national leadership, state governments, businesses and others have stepped up with costly second, third, and fourth-best schemes. We’re not yet serious about climate change The NSW government’s intergenerational report identifies fixing the slow and disorderly energy transition as the single thing it can do to improve its long-term financial position and the state’s economy. Better climate policy is now an economic as well as an environmental imperative. Governments have spent the past 16 months in reactive mode, responding to a major health and economic crisis. Read more: No Barnaby, 2050 isn't far away. The IGR deals with 2061[8] That is entirely understandable, but intergenerational reports have been warning of the impacts of the ageing population for almost 20 years. Failing to act on the obvious to-do list would be a dereliction of duty to future generations. Let’s hope the next five-yearly check-in shows us on a better path.