Governments worldwide spent more than US$14 trillion[1] fighting the health and economic effects of the coronavirus in 2020, much of it very quickly.

Among other things the timing of budgets was changed, procedural requirements bypassed, parliaments not consulted, and information not released.

In a new study comparing 120 countries, Australia was found to be one of only four countries[2] — along with Norway, Peru and the Philippines — whose processes were assessed as having “adequate” accountability.

The International Budget Partnership[3] study found that almost three-quarters of the countries studied (87 out of 120) failed to manage their immediate financial response in a transparent and accountable manner.

Almost two-thirds failed to provide transparency in procurement, half bypassed their parliaments, and only a quarter published expedited audit reports.

No countries were judged as having had “substantive” accountability.

Australia’s accountability practices included delivering an Economic and Fiscal Update[4] in place of its postponed May budget and establishing an opposition-chaired Senate select committee[5] to monitor its responses to the pandemic. 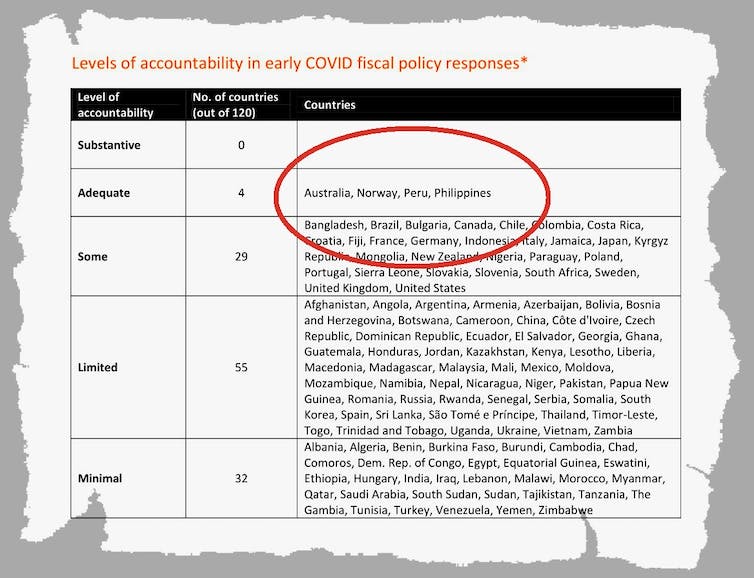 Despite the parliament only meeting intermittently early in the pandemic, the select committee and other parliamentary committees continued to hold public hearings virtually[6] to fill the accountability gap. Nevertheless, the Senate select committee faced difficulties[7] in gaining access to the government’s underlying modelling of its response packages. As well, the Australian National Audit Office failed to get an increase in funding to deal with the extra work necessitated by the government’s responses to the pandemic. Instead, its funding was cut[8] in the October budget. And the Morrison government failed to publish an analysis of the gender impact of its responses, something that became problematic as it emerged women had been disproportionately affected[9] by the pandemic. Read more: Women's Budget Statement more of a first step than revolution[10] The global study was completed in January 2021, with Australia’s accountability practices examined by the Australian National University’s Tax and Transfer Policy Institute. Since then, there have been welcome developments. 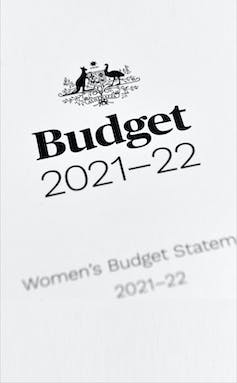 Commonwealth Treasury[11] The May 2021 budget reversed the budget cuts to the Audit Office by allocating an extra A$61.5 million[12] over four years, enabling it to take on more staff to conduct more post-pandemic performance audits. And the long-absent women’s budget statement[13] returned to the official budget papers. It’s too early to know whether these changes will make a lasting difference. Much will depend on how the content of the women’s budget statement and funding of the audit office develop. A lasting difference would give Australia a chance to be assessed next time as “substantively” accountable.