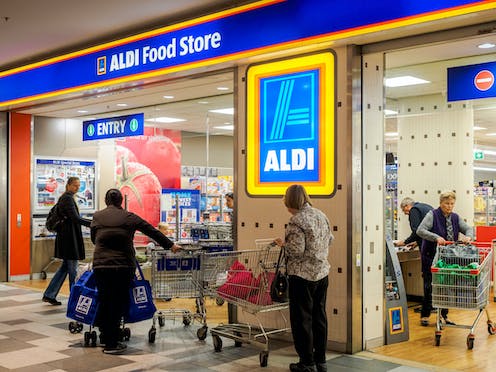 Dick Smith has laid the blame[1] for closing his Australian-made processed food lines squarely at the feet of Aldi Australia.

He accused[2] the German retailer of “extreme capitalism” and warned the CEOs of Woolworths and Coles that “unless your companies move towards [Aldi’s limited range and high proportion of private brands], you will very likely become uncompetitive”.

But this betrays a fundamental misunderstanding of Aldi’s strategy and the limits of its appeal in the Australian market.

An important element of Aldi’s strategy is a severely limited range of “preselected” products, overwhelmingly private brands. The company’s smaller range (some 1,500 store-keeping units as opposed to 20,000 to 30,000 in a large Coles or Woolworths outlet) has several advantages[3] – in terms of store footprints, warehousing infrastructure and supplier discounts, to name a few.

A proportion of these savings are passed on to consumers[4] to ensure their appeal with households wanting to stretch their shopping dollars further.

This strategy and disciplined execution propelled the company’s growth.

From its first two stores in the Sydney suburbs of Marrickville and Bankstown, Aldi gradually expanded across the eastern seaboard. It was not until 2016 that Aldi started opening stores in South Australia and Western Australia.

These new territories promised significant growth opportunities while store openings in the established territories were largely restricted to gap-filling.

By 2018[6], Aldi was operating more than 500 outlets around Australia and claiming roughly 13% of the Australian supermarket industry. Aldi’s gain in market share has overwhelmingly come at the expense of the smaller, independent supermarkets (IGA-affiliated as well as others).

Coles and Woolworths have chiefly responded[7] to Aldi through price cuts and by boosting their share of private brands. While competition in the Australian supermarket sector has increased, it remains a lucrative oasis in comparison to international markets.

As its stores now span the entire nation, Aldi’s growth can be expected to slow down. The company is unlikely to “turn on” and overwhelm Coles and Woolworths, as Smith predicts[8], because of the inherent limitations of the Aldi formula.

Aldi has successfully appealed to a particular segment of the market. It is a segment of shoppers prepared to trade low prices (coupled with sound product quality) for a variety of conveniences offered by traditional supermarkets. These shoppers readily accept Aldi’s highly restrictive range of product, the lack of manufacturers’ brands, and austere stores with minimal service at the cash register or in store.

The company has also been successful in expanding this segment, by convincing a growing number of people to do at least part of their shopping with Aldi and accept the trade-off at the heart of its offering.

But the majority of Australian shoppers prefer to do (the bulk of) their shopping with the two incumbents (Coles and Woolworths who still account for more than two-thirds of the market[10]) as well as a shrinking number of independent supermarkets and a growing set of alternative sources such as farmers’ markets or subscription-based retailers (Costco).

Aldi exemplifies strategy scholar Michael Porter’s dictum[11] that the essence of strategy is choosing what not to do. In embracing the “Aldi way”, the company has made hard strategic choices. Its strategy appeals to a sizeable segment of the Australian public.

But it’s turning away shoppers who value things other than what’s on offer at Aldi – larger choice, established brands, more service, plusher stores, in-store bakeries and delis or expanded fresh food sections. As a result, Aldi’s growth in Australia is going to reach its limits.

As far back as 2016, CEO Tom Daunt acknowledged[12] that growth opportunities were slowing in existing territories. He also acknowledged the onset of cannibalisation between existing Aldi stores, a sure-fire indicator that their segment was becoming saturated:

Increasingly those stores on the eastern seaboard are less often in virgin catchments and more often than not for the majority of those stores there is some impact on other existing Aldi stores.

A recent UBS report[13] also picked up the increase in cannibalisation among Aldi stores. UBS analysts suggested Aldi store cannibalisation in South Australia and Western Australia was reaching levels not far behind the more established territories.

This indicates that saturation might be achieved sooner in new markets, and puts growth objectives[14] in these states in doubt.

Since its arrival in 2001, the company has benefited the Australian public by injecting much-needed competition into the local grocery retail scene, thereby boosting Australian consumers’ spending power. While its success is testimony to the appeal of the Aldi formula, growth will inevitably peter out and the company will not overrun Australia’s existing retail giants.

Aldi’s experience in Australia exemplifies the benefits as well as the limitations of clear and focussed strategy.