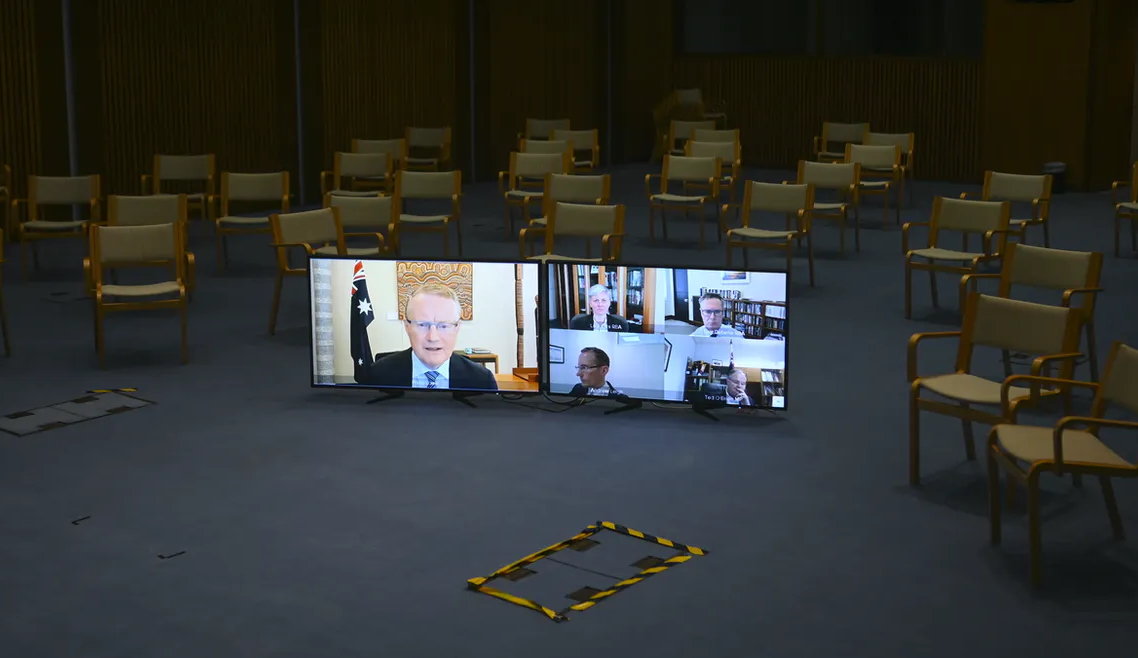 Last week Reserve Bank of Australia Governor Philip Lowe, and his top lieutenants, appeared before the House of Representatives Standing Committee on Economics.

The governor makes an opening statement that contains nothing not said before in public.

Committee members then take turns trying to trick the governor into agreeing to some policy position those members hold.

Being experienced and smart, the governor politely sidesteps these questions and repeats some version of part of their opening remarks.

For example, Craig Kelly (the Liberal member of the southern Sydney seat of Hughes) asked Lowe the following:

What about the effects on the long-term dynamism of the economy? If I’m at the university now and I’m thinking what my future career would be, if I look at it and I go down the track of the Public Service, I’m not affected economically by something like a pandemic, but if I’m in a small private enterprise it could wipe me out. Doesn’t that tend to tip the balance towards less dynamism in the economy?

Lowe responded with 160 words that said precisely nothing.

Despite this theatre, the governor’s testimony provides a useful opportunity to reflect on exactly where Australia’s policy response to the current economic crisis is up to, and the Reserve Bank’s likely future role.

Read more: No snapback: Reserve Bank no longer confident of quick bounce out of recession

Lowe reaffirmed what our political leaders – along with the overwhelming majority of the Australian public – agree on: the nation (despite the Victorian quarantine debacle) has pursued the right strategy to COVID-19, investing in the long-term good of the economy by containing the virus, so consumer and business confidence can return.

As Lowe put it:

From the outset there was a very strong sense that we needed to build a bridge to the other side when the virus is contained. As things have turned out, that bridge has had to be longer and stronger than we might have hoped would be necessary. Even so, it has been the right strategy.

Lowe reiterated that the rather extraordinary measures taken by the Reserve Bank are essentially all it can do in terms of monetary policy.

It has cut the cash interest rate to an historic low of 25 basis points (0.25%) thereby lowering mortgage rates and corporate borrowing costs. Lowe has said repeatedly he regards this as low as the Reserve Bank should go.

At the same time it is working on keep longer-term interest rates low. Its principle mechanism to do this has been through buying federal and state government three-year bonds. So far it has spent about A$55 billion buying bonds from private holders like banks and hedge funds. It being willing to buy any amount at a given price means the market has to clear at that price. This means governments can find buyers at a low rate of interest.

The Reserve Bank’s policy is to buy enough bonds to keep the yield down at 25 basis points. These lower bond rates help keep debt costs down for governments and private companies, who often borrow on three-year timelines.

Read more: The government has just sold $15 billion of 31-year bonds. But what actually is a bond?

The committee’s deputy chair, Andrew Leigh (Labor’s shadow assistant treasurer) asked a smart question about the Reserve Bank also buying longer-term bonds, like ten-year securities. Being able to borrow at low rates locked in for a decade would give companies a great ability to plan and ride out the crisis. This may be something the Reserve Bank considers, but doing so will not constitute a fundamental rethinking of its strategy.

He also offered a welcome reiteration of eight decades of economic wisdom, beginning with John Maynard Keynes and John Hicks, by clearly rejecting the idea of “modern monetary theory” (MMT).

This theory argues that circumstances mean governments can now issue bonds or even print money with abandon, because there’s little chance of causing inflation. Harvard economics professor Lawrence Summers (among other things a former US Treasury secretary) has equated this to the “voodoo” of 1980s supply-side economics – a valid idea “stretched by fringe economists into ludicrous claims”.

This is what Lowe said:

Read more: No snapback: Reserve Bank no longer confident of quick bounce out of recession

It’s now over to the government

What flows from there not being much more that monetary policy can do?

It means the government needs to do more. Lowe addressed this at the end of his opening statement, noting the priority to boost jobs:

The Reserve Bank will do what it can, with its policy instruments, to support the journey back to full employment. Beyond that, government policies that support people’s incomes, that add to aggregate demand through direct government spending and that make it easier for firms to hire people all have important roles to play.

As I have said a number of times before, we need to make sure that Australia is a great place for businesses to expand, to invest, to innovate and to hire people.

So governments need to both boost demand (through spending) and reduce imposts on business (through lowering taxes).

The nation’s strong fiscal position going into the pandemic – with net debt just 18% of GDP – and the current opportunity to borrow money very cheaply gives us the “fiscal space” to work on both the demand and supply sides of the economy.

We should, and we must. Even if there is no magic pudding.

This article first appeared in The Conversation. It is republished with permission.