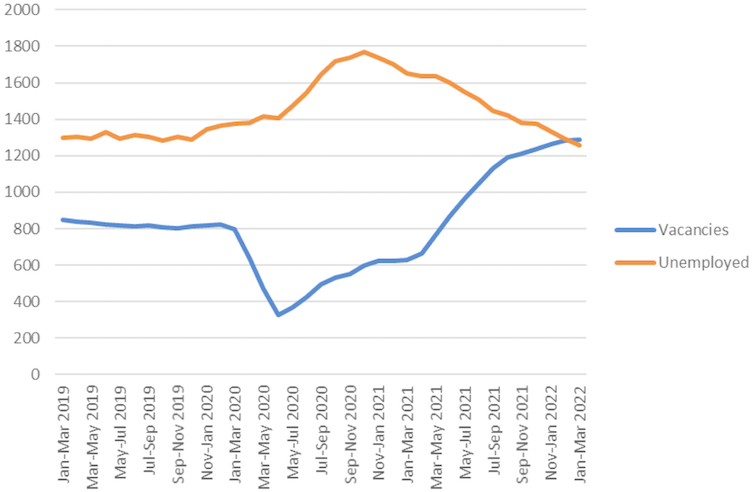 For the first time since records began, there are more job vacancies in the UK than unemployed people, according to[1] the latest monthly labour market figures. This has been driven mainly by a near-fourfold surge in job vacancies to around 1.3 million since the summer of 2020, when economic activity was allowed to resume at the end of the first COVID lockdown.

Record vacancies might seem like a good thing in terms of maintaining low unemployment. But employers across all sectors of the economy are struggling to fill vacancies, which limits economic recovery. So what explains all these vacancies, and what can be done about them?

First of all, the spectacular rise in job vacancies goes far beyond a pre-pandemic “bounce back”. Although the biggest shortages are in hospitality, there have been substantial rises across most sectors. All are above pre-pandemic levels.

Office for National Statistics (2020), Vacancy Survey and Labour Force Survey Demand for labour (that’s all employment plus vacancies) has recovered to almost exactly its pre-pandemic level. But the data indicates that the increase in vacancies is not due to a surge in demand for labour, but because the labour force is shrinking: it dropped by 1.6% or 561,000 between the first quarters (Jan-March) of 2020 and 2022, which is greater than the increase in job vacancies over the same period (492,000). Notably, people’s reasons for being economically inactive have changed over the past couple of years. Following the first COVID lockdown, the large drop in labour supply among 16-64s (those of working age) was mainly driven by rises in long-term sickness (139,000) and early retirement (70,000). Reasons for economic inactivity over time, 16-64 year olds

Note: the chart shows quarterly rolling years. Author calculations of ONS Annual Population Survey, accessed via Nomis The drop in the workforce also masks a considerable churn within it, which may be adding to employers’ difficulties in recruiting staff. During the first lockdown, the number of EU workers fell by some 300,000[2]. This has partially recovered, as you can see in the chart below, but there are still around 100,000 fewer than at the start of the pandemic. Yet this has been more than offset by continued long-term growth in the number of non-EU foreign-born workers in the UK, increasing by some 170,000 since the start of the pandemic. Brexit, in other words, in tandem with the pandemic, has been a source of churn in the labour market. Change in non UK-born workforce 2019-21

Note: although likely to be indicative of trends, non-UK residents may be underestimated due to the Annual Population Survey/Labour Force Survey shifting from face-to-face to online data collection during the pandemic. Data is currently subject to review and may be revised. Authors' calculations of ONS (2022) Labour Force Survey The geographic dimension Until now, little has been known about where this sharp rise in vacancies has been happening, which is an important question if the government is to be able to address geographical imbalances in the economy through its “levelling up” policy[3]. To help remedy this, we have been studying comprehensive online job vacancy data obtained under a special research agreement with the Urban Big Data Centre[4] at the University of Glasgow to use data[5] scraped from the Adzuna job vacancy search engine. Our data analysis is not yet published in the academic literature, but it provides an early indication of the overall pattern. The rise in the rate of job vacancies appears remarkably uneven across local authority districts in Great Britain. The two maps below show the change from before the pandemic in February 2020 (on the left) to July 2021 (on the right), the most recent month for which we have been able to compute data. This is likely to still be indicative of the most recent geographic pattern. Vacancies growth between February 2020 and July 2021

Authors’ calculations based on Adzuna vacancy data (Adzuna. Economic and Social Research Council. Adzuna Data, 2022 [data collection]. University of Glasgow - Urban Big Data Centre), ONS Business Register and employer survey and ONS local authority boundaries It shows huge increases in vacancies in relatively few districts, while most others show either modest increases or falls. The highest rates are particularly found in remoter rural areas, particularly in the south-west and north-west of England, and in parts of inner London. Many of these districts are dependent on foreign labour, particularly for agriculture in rural areas, and hospitality and other sectors in London. Again, this may be a sign of the effect of Brexit and the pandemic choking off the growth in the number of EU workers. What can’t be denied is that the employment market has been restructured in several major inter-related ways in a relatively short period, not only with Brexit but also thanks to rapid increases in remote online working, disruption to global supply-chains and COVID-related ill health. It would make sense for these factors to produce “mismatches” between the skills and locations of workers and vacancies. For example, many job seekers have skills in declining occupations, such as skilled manual work[6]. Our own analysis backs this up, since we see more job seekers than vacancies in some former industrial towns, particularly in the West Midlands and northern England – exactly the opposite problem to some inner London boroughs and rural districts. What should be done Places across the UK where job vacancies are concentrated are likely to experience sharp economic contractions if they are unable to attract more workers soon. Yet the areas that have experienced drops or weak growth in vacancies compared to before the pandemic are also a concern, as they may have been hit harder by issues like global supply chains and the pandemic and may not have enough jobs to go around. Policies to combat Britain’s labour shortage must therefore be geographically targeted. Areas in need of more jobs, particularly higher-paying jobs, often require long-term investment in infrastructure and skills. But to help areas in need of more workers, there will need to be creative solutions such as employers offering attractive packages including training and flexible working, and local and national authorities ensuring adequate local availability of affordable housing. References^ according to (www.fenews.co.uk)^ some 300,000 (www.ons.gov.uk)^ “levelling up” policy (www.gov.uk)^ Urban Big Data Centre (www.ubdc.ac.uk)^ use data (www.ubdc.ac.uk)^ skilled manual work (voxeu.org)