All sorts of claims are being made following the release of the Retirement Income Review, including that it paid insufficient attention to issues of gender.

Among other things we are being told that the gap between female and male super would narrow if compulsory contributions were lifted from 9.5% to 12%.

Since men on average earn more than women, increasing the superannuation guarantee rate would widen — rather than narrow — the retirement income gap.

By design, superannuation is a contributory scheme. That means what you get in retirement depends largely on how long you have been in the workforce and how much you have been paid.

In that respect women are at a disadvantage, firstly due to the gender pay gap.

Women get less super because they get less pay

The review points out in November 2019 the gap in total average weekly earnings was 16.9% for women and men working full-time.

While there is still a way to go, it’s an improvement.

However, the second and greater disadvantage for women is that they are far more likely to take on caring roles that lead to career breaks and part-time employment.

Some 93% of all primary carer leave is taken by women. The result is a gender pay gap of closer to 30%[3] when part-time and full-time work are taken together. 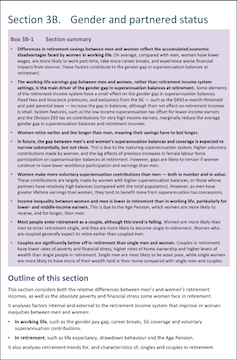 The Retirement Incomes Review modelled retirement outcomes by gender.[4] To understand the contribution of career breaks to super balances and retirement incomes, the review constructed and modelled five different scenarios[5] for female workers based on observed patterns of career breaks and part-time work. Not surprisingly the modelling found that when women take more time out of the workforce, the gender gap in superannuation balances increases. Breaks earlier in careers have a greater impact on balances than breaks taken later. In recent decades the impact of career breaks has been declining as women take less time out of the workforce. Average female working life climbed from 24 years in 1980 to around 38 years in 2019. There are a number of measures that could improve super outcomes for women. The review found one would be to require the payment of superannuation on employer paid parental leave and government parental leave pay[6]. The super gap isn’t as wide as the pay gap Another would be to require employers to make superannuation contributions to workers earning less than $450 per month[7]. The present exemption impacts directly on those who work part-time and who work for a number of different employers, 63% of whom are women. Both options would improve the retirement incomes of women, but only marginally mitigate the gender gap inherent in the way superannuation is structured. Read more: Retirement incomes review finds problems more super won't solve[8] But here’s what else we found. A number of measures already in place do quite a bit to lessen the gap. Among them are the Low-Income Superannuation Tax Offset[9] and the government superannuation co-contribution[10]. Because women earn less than men, both benefit women far more than men. Also, women benefit from the imposition of Division 293 tax[11] which limits concessions for higher income earners, who are more likely to be men. Half as worse off in retirement And women also make higher voluntary super contributions[12] as a proportion of incomes then men. This is particularly so for women over the age of 50, suggesting some make a concerted effort to catch up. As a result, in 2017‑18 the median gap in superannuation balances between men and women aged 60‑64 was 22%[13], considerably less than the 30%[14] gender gap in pay. And the age pension means test means that once women move into retirement, they are more likely than men to get the age pension, and to get more of it. Read more: Home ownership and super are far more entwined than you might think[15] When the age pension and superannuation income are combined, the retirement income gap for women who have worked full time with no career break falls to 8.4%[16] For women with two career breaks and part-time work it falls to 14.5%[17]. We could do better, and the review spelled out steps to take. It found that boosting compulsory super contributions was not one of them. An increase in the proportion of income sent to super would lift the retirement incomes of high earners more than the retirement incomes of low earners. Until things change, increases in compulsory super will boost the retirement incomes of men more than women.