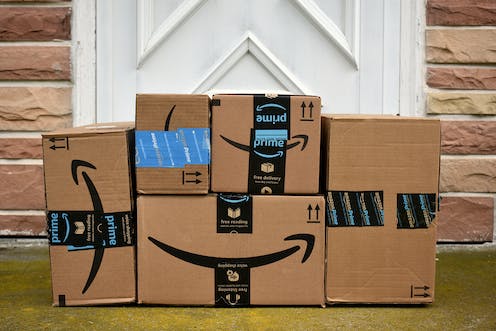 If like most Australians you have an online shopping habit, then as of this Sunday[1] you will likely pay 10% more for any goods you have delivered from overseas suppliers.

The reforms rely on local and overseas businesses and platforms (such as eBay and Alibaba) that make more than A$75,000 worth of annual sales in Australia to collect Goods and Service Tax on sales of imported goods worth A$1,000 or less, and then pass on that revenue to Australian authorities. Australia is the first country to require offshore suppliers to collect GST.

Once a platform reaches the A$75,000 threshold, any business making sales to Australian consumers through that platform will need to charge GST regardless of its size.

However, the complexity of the reforms might jeopardise the necessary cooperation of overseas businesses, and place consumers at risk of paying wrongly charged GST. It could also leave governments locked in to an ineffective way of collecting GST on imported goods.

The government’s own estimates[3] suggest that, after taking into account exclusions and non-compliance, the reforms will capture only half of all eligible sales. This will generate modest revenues of A$300 million over the first three years.

There are several good reasons to extend GST to goods bought by Australian consumers from overseas suppliers.

Much has been made of the need to “level the playing field[4]” between domestic retailers (who collect GST on all eligible sales) and overseas retailers (where GST is charged only on sales over A$1,000).

At a more basic level, as a tax on household consumption, the GST should tax the purchases of final consumers. Therefore all imports should be taxed under a GST, as this is where the goods will most likely be consumed.

The choice to not tax imports of low-value goods was made for a practical reason – the cost of customs authorities collecting the GST at the border could outweigh the revenue obtained. Estimates[5] suggest the exclusion cost about A$390 million, or less than 1% of total GST revenues of A$62.2 billion for 2017-2018.

But this has changed with the expansion of online shopping and the development of collection methods other than at the border. These reforms are therefore best understood as a revenue-integrity measure.

What will be the effect of the changes?

As border authorities will continue to collect GST on imported goods worth more than A$1,000, the reforms effectively establish two separate schemes for imported goods.

It is possible for one transaction to be taxed at the point of sale (GST is payable on sales that include low-value goods even if the total value of the sale is more than A$1,000) and again at the border (because GST will continue to be payable on imports where the value of the whole consignment exceeds A$1,000 even if it consists entirely of low-value goods).

So if a consumer buys three pairs of boots at A$400 (A$1,200 total) the transaction might be taxable either at the point of sale (as a sale that includes low-value goods) or at the border (because the total value of the consignment is over A$1,000).

Read more: Aussie retailers need to adapt to a world built on speed[6]

The reforms contain rules[7] to address this double taxation. For example, it can be avoided by the supplier providing notice to customs prior to importation.

In the event this doesn’t happen, the consumer risks paying the GST twice because no provision is made for refunding GST paid at the border.

Consumers would need to rely on the goodwill of the supplier to refund the wrongly paid GST. The same risk applies if an overseas supplier wrongly charges GST at the point of sale on a GST-free good such as a medical aid or appliance.

All of this will require a lot of cooperation by suppliers with little reward for compliance and only patchy enforcement mechanisms[8] for those that don’t comply.

The response of suppliers and platforms

Despite big players warning[9] that the reforms might “force marketplaces like eBay to prevent Australian buyers from purchasing from foreign sellers”, Amazon has been the only one to act. It announced on May 31 2018 that it would no longer ship from its US website direct to Australian consumers as of July 1.

Consumers will instead be redirected to the Amazon.au site (with Amazon collecting the GST on imports) or would need to engage a redelivery service to ship items bought on Amazon.com to Australia (with the redeliverer responsible for collecting GST).

Although Amazon is right to question the “workability”[10] of the reforms, there is little doubt that Amazon has the capacity to comply, as Treasurer Scott Morrison has suggested.

Amazon’s chosen method to comply with its GST obligations results in either reduced choice for consumers (64 million goods via Amazon.com.au compared to[11] 480 million on Amazon.com) or increased cost (if shopping through Amazon.com).

It also transfers the compliance costs from Amazon to redeliverers (no doubt offset by increased customers) and makes the redelivery provisions in the reforms, intended as a last resort, far more significant.

Read more: Amazon in Australia might not be the end of retail as we know it[12]

However, Amazon’s move is not simply about its capacity to comply with GST obligations in Australia. It must be understood in the context of governments around the world moving to collect GST and other taxes[13] on online consumer spending.

Australia is the first jurisdiction to move to adopt a vendor-platform collection model and many jurisdictions are poised to follow suit (the European Union[14], Switzerland[15] and New Zealand[16] have all announced similar reforms). The Amazon response might give them pause for thought, and sufficient pause is all that might be needed.

Amazon would like transporters[17] such as freight and logistics companies and Australia Post to collect GST on imported goods because it means suppliers and platforms like Amazon won’t have to do so.

The transporter method potentially offers a more reliable method to collect GST, but the paper-based international postal system is unable to do so at least until 2023[18].

Amazon appears willing to take a short-term hit while waiting for technology and regulatory change to make it viable to adopt its preferred method of transporter collection.

In the meantime, consumers should take care when making purchases from overseas suppliers to ensure as much as they can that GST is being correctly charged. And the world is watching.