There’s something the energy minister said when they announced the early closure of Victoria’s second-biggest coal-fired power station last week that was less than complete.

Yallourn, in the Latrobe Valley, provides up to 20%[1] of Victoria’s power. It has been operating for 47 years[2]. Since late 2017 at least one of its four units has broken down 50 times[3]. Its workforce doubles[4] for three to four months most years to deal with the breakdowns. It pumps out 3%[5] of Australia’s carbon emissions.

On Wednesday Energy Australia gave seven years notice of its intention to close it in mid-2028[6], four years earlier than previously announced, a possibility for which regulators had been preparing[7].

In what might have been a rhetorical flourish, Energy Minister Angus Taylor warned of “price spikes every night when the sun goes down[8]”.

And there he finished, without going on to detail what really mattered. South Australia and Victoria now have the lowest[10] wholesale power prices in the National Electricity Market — that’s right, the lowest.

Something happened after the closure (largely as a result of the closure) that forced prices down. 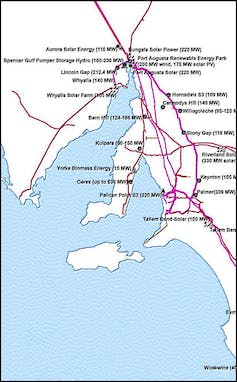 The Australian National University’s Hugh Saddler[15] points out that renewable-sourced power — wind and grid solar — now accounts for 62% of power supplied to the South Australian grid, and at times for all[16] of it.

Much of it is produced near Port Augusta, where the Northern and Playford coal-fired power stations used to be, because that’s where the transmission lines begin.

Being even cheaper than the power produced by the old brown-coal-fired power stations, there is at times so much it that it sends prices negative[17], meaning generators get paid to turn off in order to avoid putting more power into the system than users can take out.

There are times (when the wind doesn’t blow and there’s not much sun, such as last Friday[18] in South Australia) when prices can get extraordinarily high.

Although “dispatchable[19]” in the technical meaning of the term used by the minister, coal-fired stations can’t fill gaps quickly.

Read more: The death of coal-fired power is inevitable — yet the government still has no plan to help its workforce[20]

Batteries can respond instantly to a loss of power from other sources (although not for very long), hydro can respond in 30 to 70 seconds, gas peaking plants can respond within minutes[21].

But coal can barely move. As with nuclear power, coal-fired power needs to be either on (in which case it can only slowly ramp up) or off, in which case turning it on from a standing start would be way too slow.

What was a feature is now a bug

That’s why coal-fired generators operate 24-7, to provide so-called base-load, because they can’t really do anything else. 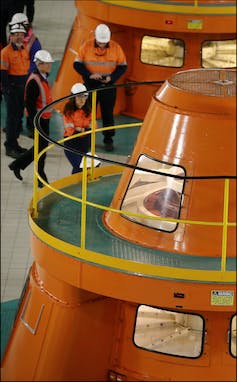 Snowy Hydro generators can be turned on and off at will. Alex Ellinghausen/AAP

Brown coal generators are the least dispatchable. Brown coal is about 60% water[22]. To make it ignite and keep boiling off the water takes sustained ultra-high temperatures. Units at Yallourn have to keep burning coal at high output (however low or negative the prices) or turn off.

In the days when the other sources of power could be turned on and off at will, this wasn’t so much of a problem.

Hydro or gas could be turned on in the morning when we turned on our lights and heaters and factories got down to business, and coal-fired power could be slowly ramped up.

At night, when there was less demand for coal-fired power, some could be created by offering cheap off-peak water heating.

But those days are gone. Nationwide, wind and solar including rooftop solar supplies 20%[23] of our needs. It turns on and off at will.

Wind often blows strongly at night. What was a feature of coal — its ability to provide steady power rather than fill gaps - has become a bug.

It’s as if our power system has become a jigsaw with the immovable pieces provided by the wind and the sun. It’s our job to fill in the gaps.

To some extent, as the prime minister[24] says, gas will be a transition fuel, able to fill gaps in a way that coal cannot. But gas has become expensive, and batteries are being installed everywhere.

Energy Australia plans to replace its Yallourn power station with Australia’s first four-hour utility-scale battery[25] with a capacity of 350 megawatts, more than any battery operating in the world today. South Australia is planning an even bigger one, up to 900 megawatts[26].

Read more: Huge 'battery warehouses' could be the energy stores of the future[27]

Australia’s Future Fund and AGL Energy are investing $2.7 billion[28] in wind farms in NSW and Queensland which will fill gaps in a different way — their output peaks at different times to wind farms in South Australia and Victoria.

Filling the gaps won’t be easy, and had we not gone down this road there might still have been a role for coal, but the further we go down it the less coal can help.

As cheap as coal-fired power is, it is being forced out of the system by sources of power that are cheaper and more dispatchable. We can’t turn back.