Women are also less likely to be employed than men, about 14%[2] less likely, in part because women give birth to and are more likely to care for children.

What is less well known is that women are 32%[3] less likely to work full-time than men and have an average commute that is 20%[4] shorter.

Could women’s shorter hours (even when working full-time[5]), and shorter commutes be part of the reason for the gender gaps in wages and employment?

If women are willing to endure longer periods of unemployment and lower rates of pay in order to get a job that provides their preferred working hours and commuting distances, it could be.

The Netherlands[6] has similar gaps[7] to Australia on all of these metrics.

In a study[8] with Wolter Hassink of Utrecht University I used ten years of administrative micro data from Statistics Netherlands to examine differences in the experiences of men and women who had lost their jobs.

We limited the analysis to people who had lost their jobs when their employer went bankrupt, an event that affects men and women equally, and further limited it to workers with a job tenure of at least three years who had worked at least 20 hours a week before job loss.

The data covered the entire population of Dutch individuals, households and firms, providing precise information on the dates that jobs ended and the employment experience that followed.

Only six in 10 women were re-employed six months after losing their job, compared to seven in 10 men. Encouragingly, the women who did regain employment did it at no lower hourly wages relative to men than before.

Intriguingly, after the sacked workers were reemployed, the gender difference in both their hours of work and commuting distance became larger.

Read more: Sorry, men, there's no such thing as 'dirt blindness' – you just need to do more housework[9]

Women seemed to hold out longer for shorter hours and commutes.

An important reason would be that women spend about twice as much[10] time on unpaid housework and childcare than men, leaving less time for paid work and travelling to and from work.

If men were more present at home…

Part of the reason women spend more time on domestic duties than men, but certainly not the only or biggest reason, might be that in countries such as Australia and Netherlands flexible work is more readily available for women.

This would mean that government policies that enable women to take parental leave and transition from full-time to part-time work on the birth of a child might have the unintended effects of stimulating gender gaps in employment and (through loss of general skills) wages. 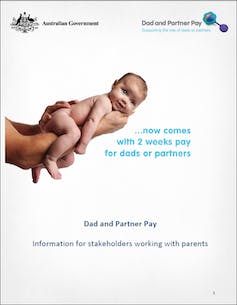 Dad and Partner Pay brochure[11] Australia’s paid parental leave legislation scheme is built around the idea of a single “primary carer[12]”. That person (99.5% times the mother) gets the leave. The father can only access two weeks of “dad and partner pay[13]”, at the minimum wage. Elsewhere, fathers can take much more. Sweden (and Iceland) provide three months paid leave to each parent and a further ten months (and in the case of Iceland, three months) for parents to divide as they wish. In 2007, Germany gave fathers eight weeks leave. It seems to have made mothers more likely to return to the labour market[14]. Our Netherlands research showed men who had worked part time before their firm went into bankruptcy lost far more of their hourly wages on obtaining reemployment than either men and women who had worked full time or women who had worked part time. This suggests employers see a part-time employment in a man, but not in a woman, as signalling low productivity. Promoting flexible work and parental leave for men (and removing the negative signals associated with them) is a promising avenue for progress on closing gender gaps and shifting societal norms. But it is not without its challenges.