The United States Post Office has just announced the 33rd stamp in its literary arts series – a striking image of novelist and essayist Ursula Le Guin[1].

Behind the portrait is artwork depicting a scene from The Left Hand of Darkness[2], Le Guin’s 1969 novel. It features the Gethenians, a species which is generically asexual, but randomly become male or female during estrus. 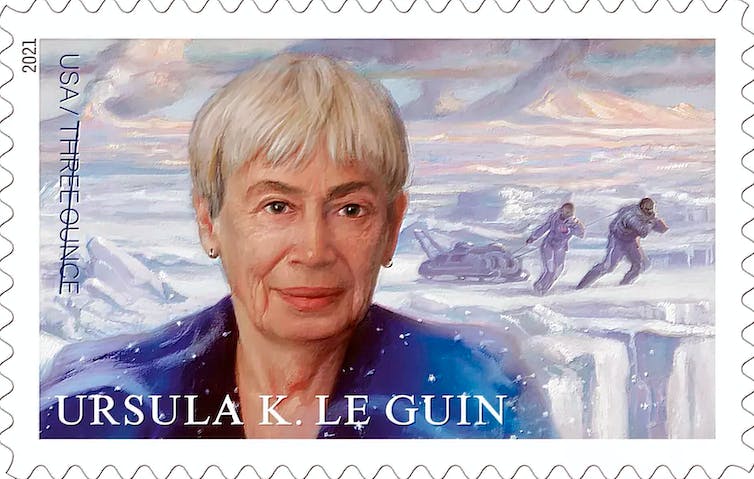 Le Guin predicted such a society would avoid any gender-specific roles and invent shared ways to raise children. The radical premise of the novel is captured in its best-known line – the king was pregnant[3]. Such an idea emphasises the role of chance in our lives. We are born into bodies, families, health, ethnicities and societies we did not choose. These accidents shape much about the lives that follow, inviting us to consider how we treat those born into extreme disadvantage – what are our obligations to counterbalance the misfortunes created by the lottery? Try applying the veil of ignorance test Le Guin was replaying, with characteristic subtlety, an ancient debate about whether to accept unfairness as inevitably — “the poor you will always have with you[4]” – or use institutions to create a more equitable distribution of life chances. Her novel anticipated by a few years what may be the most famous thought experiment in modern philosophy — the veil of ignorance[5]. Imagine you can shape the laws of the nation but must make the decisions before knowing anything about your identity. You might turn out to be poor or rich, able-bodied or infirm. Gendered or not, young or old, talented or less gifted — all these conditions are hidden as you decide the rules of your society. In his 1971 book A Theory of Justice[6], philosopher John Rawls suggested people behind such a veil would value justice above all. Ignorance and self-interest dictate fairness When identity is veiled, self-interest dictates equality. Slave owners would think carefully about supporting servitude if they might become slaves. As Abraham Lincoln is said to have asked when addressing claims that slavery was justified – what is this good thing that no man wants for himself[7]? Rawls sees two principles as essential to fairness: liberty, so we can make our own choices as long they do not harm others, and acceptance of difference so that opportunities are open to all, regardless of circumstances. The world should not be carved out only for the clever and the already fortunate. Read more: Disability and single parenthood loom large in inherited poverty[8] The prescription has been much debated. Some see the cost of such equality as too high. Others object to a notion of justice defined around material goods, noting that inequality is only about wealth and not also about power, respect, voice and control. The radical implications of Rawlsian justice are not apparent in the ways Australia and other nations deal with poverty in their midst. Australia has never been particularly fair The Melbourne Institute’s long sequence of HILDA household income and labour dynamics surveys point to a strong correlation between poverty in childhood and poverty in adult life – a situation where poverty begets poverty[9]. Australian rates of poverty slightly exceed[10] OECD averages, meaning the poor are indeed always with us. Our response to poverty began with private charity, but early in the twentieth century moved to government programs, principally payments. Senior and invalid pensions began in 1909 followed by unemployment benefits, pensions for veterans, and support for mothers and children and health after World War I. Read more: Land of the 'fair go' no more: wealth in Australia is becoming more unequal[11] Australia has never pursued a substantial redistribution of wealth. Benefit payments remain modest and usually means-tested. Elections consistently suggest Australians are comfortable with limits to public generosity; we choose governments that tax and spend slightly more than in the United States but a good deal less than in Europe. As a result, many Australians grow up in poverty, and a significant number pass it on to their children. Even a single year in poverty during childhood harms likely income in adulthood, and the longer someone is in poverty in childhood the less chance they have of escaping poverty[12] in adulthood. A long-tailed lottery This makes the lottery of birth a lifelong inheritance, with consequences for access to education, health, employment and social capital. For those who find Rawls too confronting, there are other ways of thinking about our responsibilities toward those less fortunate. One is to look through the lens of what Nobel Laureate economist Amartya Sen labels “capability[13]”, an approach at one time[14] adopted by Australia’s treasury[15]. Capability is the powerful idea that each citizen should be equipped to lead a life they have reason to value[16]. Investment through public provision – schools, hospitals, pensions and so on – is part of ensuring capability. Practically, this might mean a national disability insurance scheme rather than a pension. But improvements through public investment can be hard to deliver in practice. Capability means recognising and responding to individual needs, but personalising services is expensive and sometimes problematic. “Why are you treating me differently from others?” is a reasonable question. New Zealand points to a way out 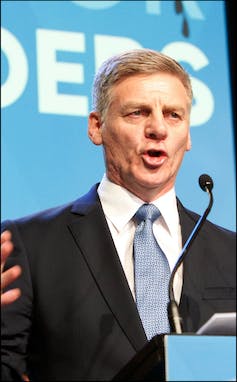 Former New Zealand Prime Minister Bill English made targets deliberately hard. Nick Perry/AP Traditional public administration emphasises equal treatment for all and so employs standardised models and allocation principles. By dealing with everyone in the same way, government agencies achieve technical (Rawls-like) fairness but not always the right (Sen-like) response to individual circumstances. Yet there are encouraging signs of greater flexibility. New Zealand is using performance indicators[17] based around people. Jacinda Ardern’s predecessor as prime minister, National Party leader Bill English, reshaped his cabinet’s mission statements to focus on individuals. In assigning ministers a shared requirement[18] to reduce the number of assaults on children, he chose a target he said was “deliberately designed to be difficult”. It would “require significant focus on the customer by multiple agencies”. Similar thinking influenced Our Public Service Our Future[19], the 2019 review of the Australian Public Service led by David Thodey. It embraced the idea of using technology to personalise responses, and commended recent state and federal initiatives to coordinate services around each citizen. I expand on this in On Life’s Lottery,[20] published last month by Hachette, examining ways in which communities, governments and charities can work together to improve choices for people born into disadvantage. Reflections on our obligations to others, and pathways to tailor support, are central to an essential goal: how we ensure the ticket we get at birth does not solely determine the journey ahead.