As JobKeeper enters its final weeks, the government has released the latest Tax Office breakdown of the numbers coming off the program, amid concerns its end in late March will see a rise in unemployment.

With attention currently on Victoria, in a five day lockdown due to a COVID outbreak that started with a hotel quarantine breach, the JobKeeper numbers underline the impact of that state’s long lockdown last year.

In Victoria about 1.1 million workers received JobKeeper in its first phase, which ran from April to September, falling to 626,000 in the second phase, October to December.

This was a reduction of just 44%, substantially less than the declines in every other state and territory.

The figures included substantial reductions in various regions with a reliance on tourism, despite the problems faced by that industry.

Some 18% of the Victorian pre-COVID workforce was on JobKeeper in the second phase, substantially above the proportions in other states and territories.

The number of employees on JobKeeper in the month of December fell 65,000 compared to November. In November there had been a fall of 30,000 compared with October.

There was a 56% fall in employees on JobKeeper in its second phase compared with its first phase. Some 520,000 firms and 2.13 million employees went off the scheme after the end of September.

Reserve Bank Governor Philip Lowe has anticipated some job shedding after JobKeeper ends. This could cause brief rises or slower falls in unemployment, he said this month. He advocated an increase in the JobSeeker base rate, on fairness grounds. The government has yet to announce its long term plans for JobSeeker, but there is general support for it not going back to the old rate after the Coronvirus supplement ends.

ACTU Secretary Sally McManus told the ABC on Sunday JobKeeper should be extended for those businesses still affected by COVID.

Releasing the latest figures, Treasurer Josh Frydenberg said with 785,000 jobs created in the last seven months, the government’s focus “continues to be getting people back into work”. But “we know that some families and businesses are still doing it tough and my message to those people is that the Morrison government continues to have your back.”

All industries saw marked reductions in employees on JobKeeper in the December quarter, compared with its first phase, with most falling by at least half.

Retail trade saw a 68% decrease, taking those on the support from an average of 26% of the workforce over the first phase to 8% over the second phase.

In accommodation and food services the fall was 52%, to 17% of the workforce in phase two.

Education and training saw a 50% fall, to 6% of the workforce.

The government insists it will not extend the program although it will look at further assistance where there is a particular need.

The JobKeeper figures come as Health Minister Greg Hunt said the first doses of vaccine will arrive from overseas “before the end of the week, if not earlier”, and Victoria announced two new local cases and another one in hotel quarantine.

At the front of the queue to get the vaccine will be quarantine and border workers, as well as aged care residents and staff.

Hunt said once the vaccines arrived they would be examined to make sure there hadn’t been “any inflight actions that damage quality such as a loss of temperature”. 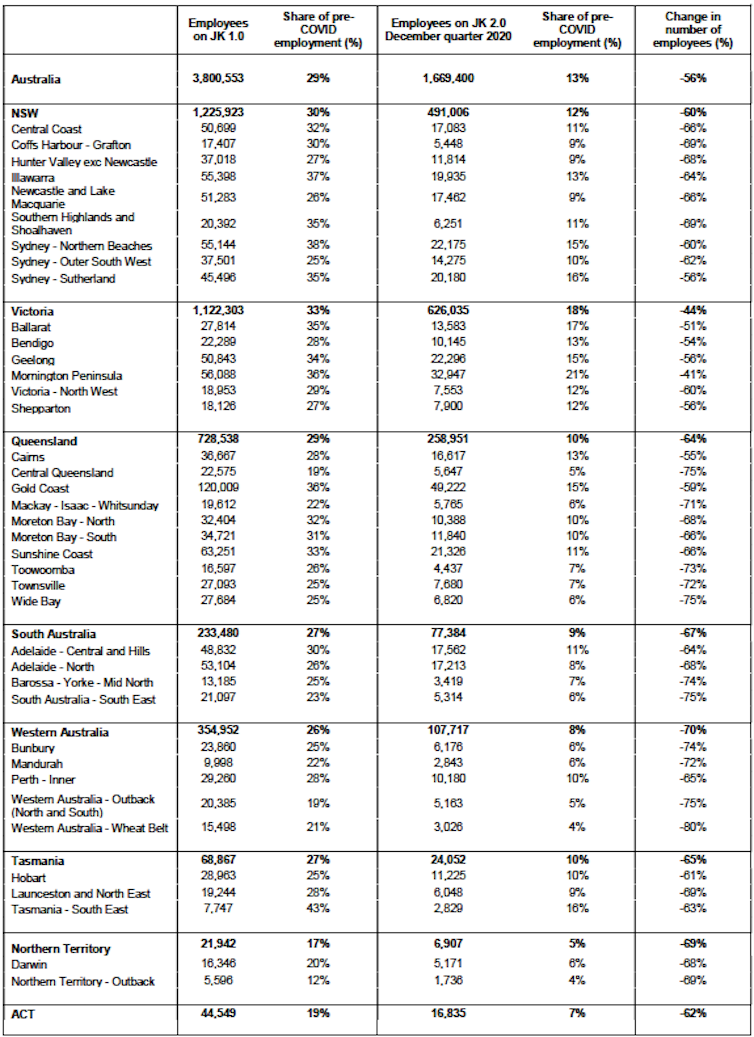