With the relationship between China and Australia souring in the past six months, New Zealand’s response will need to be nuanced and careful, but also principled.

First and foremost, we must ensure the dispute between two of our main trading partners stays partitioned from our role within the Five Eyes security alliance. If they become muddied, our economic relationship with China will suffer.

This is complicated by Australia’s recent forthright positions on a number of strategic issues, including an insistence that the World Health Organisation (WHO) conduct a robust inquiry into the origins of COVID-19, and criticism of China’s actions in Hong Kong.

By accident or design, Australia has appeared to be in the front line of Western criticism of Beijing — and has been subjected to a growing list of export restrictions in return.

Chinese authorities have asserted that Australia is unfairly dumping (selling below cost) or subsidising many of its exports, and have imposed tariffs on wines (up to 200%[1]) and barley (up to 80%[2]).

Other export products, such as lobster[3], have been blocked by more indirect means, such as additional hygiene requirements. Claims of pest threats have affected timber[4] shipments, and meat[5] supply lines have been disrupted by concerns over labelling and health certificates.

Beyond this, coal[6] has been affected by preferential treatment for other producers. Iron ore is the only Australian export that has so far not been targeted — Australia dominates the international market and China has an insatiable demand. 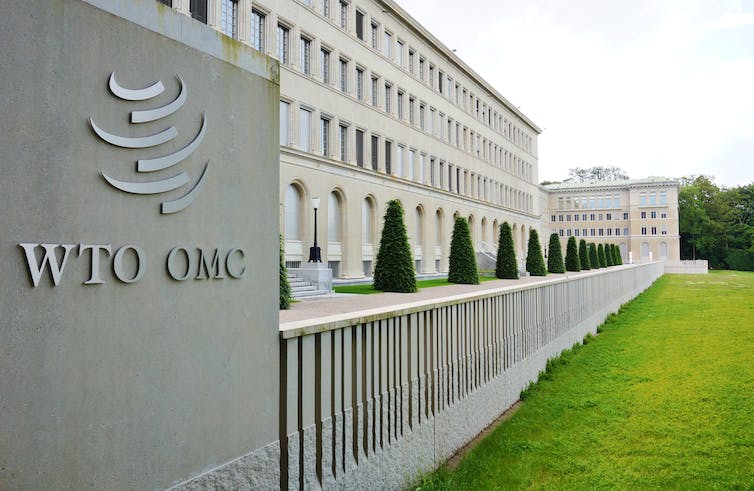 WTO headquarters in Geneva: resolution of trade disputes can be a long, drawn-out process. www.shutterstock.com

Why the WTO is vital

Australia has now taken its concerns[7] to the World Trade Organisation (WTO), with barley seen as the best case (although other products may follow). If the consultation process over the next few months fails, a panel will be created to rule on the matter.

There is a lot at stake here, and New Zealand will want to pay close attention because of the wider ramifications. Australia, like New Zealand, has a free trade agreement[8] with China which has seen strong growth since 2015. The value of Australian exports to China has doubled, from AU$75 billion to $150 billion in five years.

China makes up a whopping 30.6%[9] of Australia’s top ten export markets — more than double Japan, the second most important market. At 56%[10] of the total value of those exports, iron ore swamps all other trade streams.

New Zealand has experienced similar growth, with two-way trade increasing[11] from $NZ10 billion in 2007 to over $30 billion today. Around 28% of all New Zealand exports go to China[12], including more than a quarter of dairy, about half of all meat, and almost two-thirds of wood exports.

But going to the WTO will not be a quick or easy process. It could drag on for years, especially if there are appeals, which is likely given both countries are veterans at this and both are quite litigious.

Both Australia and China have recorded wins and losses. China lost to the European Union[16] but did score a victory[17] over Donald Trump’s trade restrictions. Australia recently lost to Indonesia[18], and lost earlier to New Zealand with its wrongful biosafety measures keeping our apples out of their market for nearly 100 years. But overall, Australia’s record at the WTO generally suggests more wins than losses.

The good news is that going to the WTO for resolution endorses the rules of international trade law (and a rules-based international order in general) — not an order based on the arbitrary power of the strongest. This is exactly what globalisation should look like.

China[20], like Australia, publicly professes to be a good member of the WTO. Both have adhered to a temporary appeals process[21] as a way to bypass the Trump administration’s attempts to undermine[22] the WTO’s ability to resolve trade disputes.

While some in the US have cast doubt[23] on China’s compliance with WTO rules, other analyses[24] suggest Chinese compliance with the dispute settlement mechanism is respectable[25] and better than is commonly portrayed.

Indeed, while compliance may sometimes be less than perfect, there are no cases of China simply ignoring rulings against itself.

NZ should become a third party

Perhaps the best news is that this dispute has stayed within the trade arena and has not spilled into the area of strategic alliances. This is despite the Five Eyes partners having reportedly discussed[27] widening their focus beyond security to include economic retaliation.

As well as doing what it can to ensure this remains the case, New Zealand (with other interested countries) should seriously consider becoming a third party to the WTO in this dispute.

To do so would mean we would need to demonstrate a “substantial interest[28]” in the case. This need not be only economic, but could involve the impact of the measures in question on the overall trading system.

If we do this, New Zealand should make clear this is not a Gallipoli moment where we are blindly following our ANZAC sibling. Our engagement should be in defence of a higher principle, albeit where trade is the context. Only a rules-based order, premised on international law and independent, binding processes can make the future secure for all players, large and small.