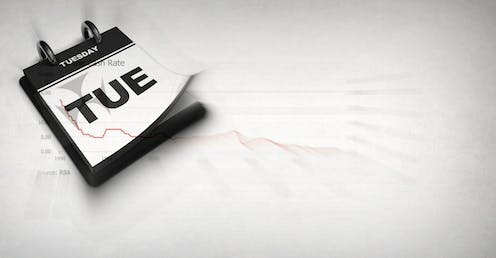 Every first Tuesday of every month but January the Reserve Bank Board meets to decide whether to adjust interest rates. It announces its decision at 2.30 pm eastern time[1].

It ought to be an easy decision. Officially, the bank aims for a target inflation rate of between 25 and 3% “on average over the cycle.”

It’s has been the way the Reserve Bank Act has been interpreted since the early 1990s, with the view being that keeping inflation low is the best way it can support sustainable economic growth.

With inflation now showing no overall price rise[2] (0%) over the first three months of this year and only 1.3% over the past twelve months, it would seem incumbent upon the bank to cut rates - now - to get inflation back up.

But, for what it’s worth, here are the reasons I think it shouldn’t, at least not now.

Rate cuts don’t do what they did

First, interest rate cuts normally do their work by encouraging people to spend, which then feeds through intro price rises. However, it has long been understood by economists that at very low rates, further interest rate cuts may have only limited effects. With household debt already high, it is doubtful that a further cut will encourage people to borrow even more in order to spend more.

Of course another reason not to cut rates is the fact that an election will take place in 11 days time. It’s a difficult one for the bank. It quite rightly wants to be seen as independent. Cutting rates ahead of an election runs the risk of making it look as if it is trying to help the government, although ironically, at the moment a rate cut might help the opposition by putting beyond doubt its argument that the economy is weak.

All in all I think it would be better for the bank to wait a month until after the election, given that the need for a cut isn’t urgent.

House prices are still too high

A third reason not to cut rates is that the rate cuts we have had have distorted asset prices. House prices might have fallen, but the prices are still well above levels that would prevail if interest rates were normal. To cut rates now risks reigniting house prices.

The main reason why I think we shouldn’t have a rate cut is that we rely much too heavily on monetary policy (which is interest rates).

The main reason wage and economic growth is low because productivity growth is low. Lower interest rates will do little to lift it. The policies that might lift it have been few and far apart in the election campaign, but it is what we need, and it is difficult. The Productivity Commission[3] came up with a list in the first of its five-yearly productivity reviews. It’s key points were better health care, a better education system, taxes on unused land, better planning, and a properly functioning energy market and industrial relations system.

There are better ways to lift incomes

Instead, we run to the monetary policy teat at the first sign of economic weakness because it is easy and comfortable and has delivered before.

It is time also to reassess the Reserve Bank’s 2-3% inflation target. Weak consumer demand, demographic change and global competition might have created a new normal, meaning a target of 1-3% or even 0-3% might be more realistic.

Economists tend to dislike a zero inflation target because of the risk of missing and bringing on deflation, but inflation volatility has been low enough in recent years to make 1-3% target pretty safe and to stop us running to the bank each time things look weak.

Read more: Vital signs. Zero inflation means the Reserve Bank should cut rates as soon as it can, on Tuesday week[4]