When, in the midst of the pandemic, the Economic Society of Australia invited 150 of Australia’s keenest young thinkers to come up with “brief, specific and actionable” proposals to improve the economy, amid scores of ideas about improving job matching, changing the tax system, providing non-repayable loans to businesses and accelerating telehealth, two proposals stood out.

They were actually the same proposal, arrived at independently by two groups of “hackers” in the society’s annual (this time virtual) “hackathon[1]”.

I was one of the judges.

The mentors who helped test and guide the proposals were some of the leading names in economics, among them Jeff Borland, John Quiggin, Gigi Foster, Deborah Cobb-Clark, Peter Abelson and John Hewson.

The proposal is to fast track the 15 or more projects already identified[2] by the Australian Energy Market Operator as essential to meet the electricity grid’s transmission needs over the next 20 years.

Starting them immediately, when business investment is weak and there’s a need for jobs and governments can borrow at rates close to zero[3], will bring forward all of the benefits of being able to bring ultra-cheap power from the places it will be made to the places it will be needed as expensive fossil-fuel generators bow out or are out competed.

Read more: Explainer: what is the electricity transmission system, and why does it need fixing?[4]

Judges Alison Booth, Jeremy Thorpe and I noted that policy hacks were the most useful where neither the market nor the government[5] was getting the job done.

The proposal would help ensure renewables can connect to the grid, something “neither the market nor the government is managing to do quickly”.

Here is what is proposed in the winners’ own words:

Investment in new renewable generators in Australia sank 40%[11] in 2019. A major factor holding them back is grid access. The best locations for wind and sun often have poor access to the cables that transport electricity to consumers.

Our near-term recommendation is to guarantee Project EnergyConnect[12], a 900-kilometre cable between NSW and South Australia due to begin construction next year. The network operators got approval in January, but there is now uncertainty[13] over whether they will get the funding.

We propose that the two state governments agree to cover the shortfall between approved revenues and realised costs (up to a pre-determined limit) to ensure construction starts on time in 2021.

Medium-term, we recommend the Australian Energy Regulator conduct the regulatory investment test and revenue adjustment processes for all priority projects in parallel to condense approval timelines and that the Commonwealth and state governments underwrite priority projects’ early works. 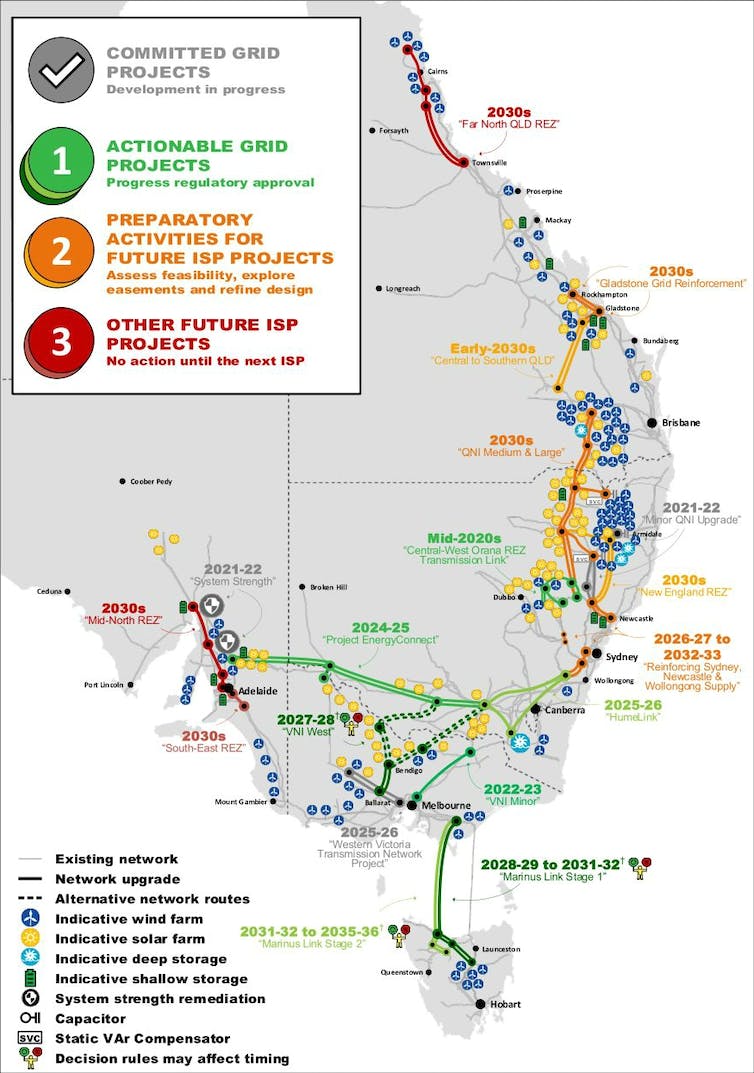 AEMO Integrated System Plan[15] The case for fast tracking transmission Patrick Sweeney, Sam Edge, Elke Taylor, Jacob Keillor, Timothy Fong[16][17][18][19][20] Currently valued at A$20 billion, the Australian transmission network was designed for a centralised 20th century power mix and suffers from aging infrastructure. The $6 billion upgrade we propose would have as its centrepiece 15 projects the Energy Market Operator has already identified as essential. Fast-tracking these projects has the potential to generate 100,000 jobs, to bring about strong private investment in low-carbon power production, and to place downward pressure on wholesale power prices, producing $11 billion in benefits.

A national taskforce consisting of the department of energy and the market operator would oversee a project of a similar size to the Snowy Mountains scheme, which itself created more than 100,000 jobs[21] during its lifecycle. Read more: The verdict is in: renewables reduce energy prices (yes, even in South Australia)[22] The government would procure the funds by issuing bonds, with recent rates indicating the yield payable will be less than the rate of inflation. Firms that tendered for the work would be evaluated on their capacity to upscale production to meet milestones and on their plans to generate long-term, sustainable employment.