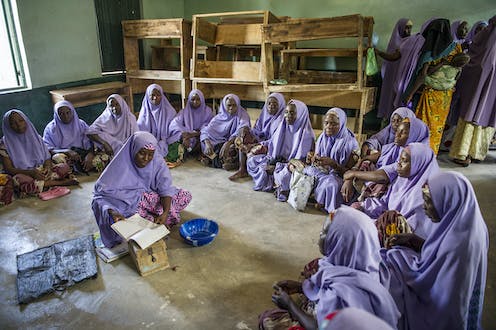 Giving small loans to people for small household purchases or to invest in businesses has been an integral part of Australian[1], American[2] and other aid programs for decades. This is called “microfinance[3]”, and the aim[4] is not only to alleviate poverty, but to empower women[5].

But simply improving a woman’s economic situation does not necessarily result in greater equality. Increasing women’s economic engagement often increases their work burden on top of all the unpaid labour they do. It can also challenge established gender roles and power hierarchies, causing conflict in the home and even domestic violence.

Empowering women needs to be about more than economics and requires changing the power dynamics and other cultural factors that repress women. So that they can make decisions about their life and mobility, control their money and have access to information, transport, tools and land.

Several studies[6] have shown a link between women’s increased access to credit and increased domestic violence. Development agencies have been forced to develop “do no harm” procedures to try to prevent this[7].

And on top of all this, some microfinance programs only have a minimal impact[9] on development outcomes like health and education.

Not tackling the problem

Microfinance programs do nothing to challenge or transform[10] the structural conditions that create poverty in the first place. It is like putting a band-aid over a deep wound.

Indeed, microfinance shifts responsibility for poverty alleviation onto the poor and marginalised. This is particularly concerning in places such as Cambodia and Myanmar, where vulnerable post-conflict populations can become easily trapped in debt cycles[11], using one loan to repay another.

Read more: Challenge 11: How improving women's status helps us all[12]

Empowerment requires addressing women’s lack of control over their own lives. Professor Naila Kabeer defines empowerment[13], as “the ability to exercise choice” where previously people could not.

This kind of empowerment requires structural change[14] within both families and societies. This includes greater access to and control of resources, as well as new norms for women both individually and within families and society.

If development programs don’t challenge the structural causes of gender inequality, at best, microfinance will just continue to reinforce poverty and inequality.

We shouldn’t write off microfinance entirely. It can work if returned to its grassroots, and run for the benefit of participants rather than to create profit.

There has been a trend toward profit-making microfinance institutions[15] that charge higher interest rates, extracting the little surplus poor people are able to raise from their meagre livelihoods.

Microfinance must be culturally sensitive and driven by the community. If nothing else, we know that there is no such thing as a one-size-fits-all model, and results in one region don’t necessarily transfer across regions or cultures.

Read more: A healthy world starts with a healthy mother[16]

There are some microfinance variations that appear to work better than others, such as Oxfam’s Saving for Change[17]. This program operates in rural villages throughout 13 countries, with 680,000 members.

This model focuses on supporting small groups of women who save money together and then extend credit amongst themselves and then their communities.

But these alternatives to mainstream microfinance models require further investigation and support[18] as to the impact on women’s empowerment. In the meantime the development sector needs to be more self-critical about the impact of their programs.