Australians receiving unemployment payments are often negatively portrayed[1] as a relatively small group of people with personal or behavioural problems that stop them from getting a job.The unparalleled growth in unemployment during COVID-19 has opened up significant space to challenge long-held perceptions of “them and us” when it comes to welfare.

Nevertheless, extra support to Australia’s unemployed has already been substantially wound back[3] — with plans to do so again[4] by the end of the year.

Our new study[5], by a team at the Brotherhood of St Laurence, RMIT University and the Australian National University, highlights significant misunderstandings about the scale and scope of Australians who received Newstart — the unemployment payment replaced by JobsSeeker Payment[6] earlier this year.

Bottom line? It’s much more common to get the payment than you think.

‘Everyone counts’: our research

This study[7] makes use of a Department of Social Services database[8] that records every interaction with Centrelink. This is the first time results from this database have been published by independent researchers.

It has given us an important opportunity to track how people have used unemployment payments — specifically Newstart Allowance — from 2001 to 2016 (the years available for study).

We took a simple but new approach: to count every individual who ever received Newstart between those years.

Our analysis is part of broader research that aims to gain a clearer understanding of the dimensions of “income volatility” (sudden changes in income) in Australia.

How many people receive payments?

We found receiving unemployment payments was much more common than previously thought during the study period.

For example, between 2013 and 2016, the number of people receiving Newstart at the end of the financial year ranged between 660,000 and 750,000. But over the course of each of those years, well over 1.1 million separate individuals received an unemployment payment.

This suggests approximately one in 11 people (9%) in the labour force received Newstart in any of these years.

Overall, when we look at the “flow” figures, more than 4.4 million people received Newstart between 2001 and 2016 (nearly 2.5 million men and 2 million women). This is nearly one quarter of the qualified working-age population over this period. 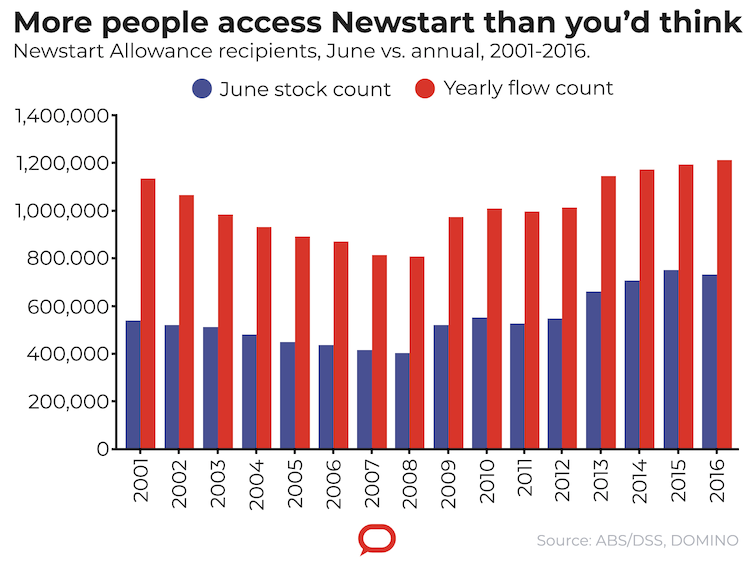 Author provided/The Conversation, CC BY-ND[10] We also found the proportion of women receiving Newstart increased from 30% in 2001 to 46% in 2016. In part this reflects policy changes[11] that predominantly affected women, such as restricting access to parenting payments and the increase in the Age Pension age for women. Time spent on welfare varies There is a widely-held view that many unemployed people rely on the payment for a long time[12]. But our analysis provides a mixed picture on this point. Nearly half of the Newstart population of 4.4 million (47%) received the payment for less than a year. Over two-thirds (68%) received it for less than two years. So this would appear to contradict the idea most people rely on it long-term. However, it remains important to recognise that a significant minority still do. At the other extreme, around 15% were on the payment for a total of five or more years. About 3.6% had been on it for ten or more years. 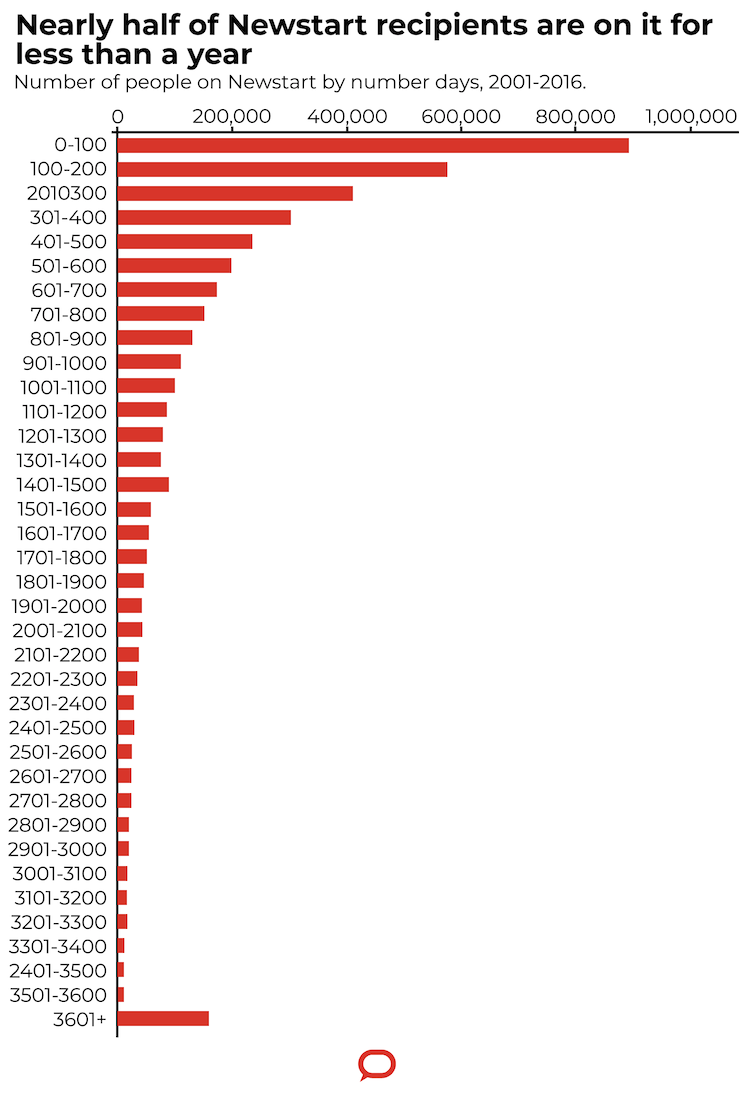 Author provided/The Conversation, CC BY-ND[13] Between the two extremes — people who had only one short period on Newstart and people who spent most of these years on it — there are a multitude of differing patterns. This reflects both the ups and downs of the Australian labour market and the volatile circumstances experienced by many working-age Australians. Dramatic rise in payment suspensions Fluctuating income is a key cause[14] of household financial and emotional stress. It can affect well-being as much as (if not more than) low wages. For people receiving an income support payment, the disruption caused by uncertain income is even worse — even a day’s delay in payment can have major consequences when it comes to paying bills or rent. People on Newstart (now JobSeeker) can have their payments suspended either for not reporting their income[15] correctly or not meeting job-seeking requirements[16]. Successive governments have increasingly sought to enforce[17] this — which has led to more uncertainty around the payment. Our study found rates of suspension increased dramatically over the study period, from 2% in 2001 to 11% to 2016. Of those who were suspended, the likelihood of experiencing multiple suspensions increased from 2.3% to 14%. 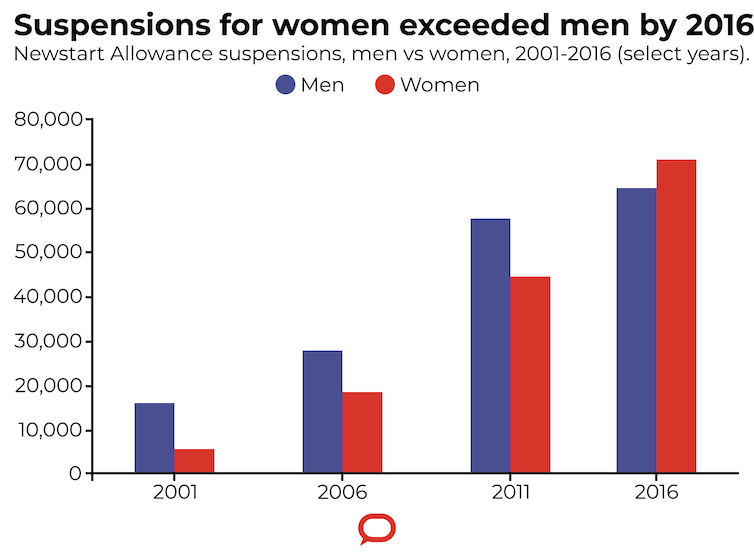 Author provided/The Conversation, CC BY-ND[18] Women were more likely to have been suspended on multiple occasions than men. In 2016, 12.7% of the 556,000 women who received Newstart were suspended, compared to 9.8% of the 653,000 men. Social security is not a ‘marginal’ issue The biggest lesson of our study is that the idea social security payments are confined to a group of unfortunate individuals and families living at the margins of society is incorrect. Our findings show how short-term reliance on unemployment benefits is relatively common. Social security, like healthcare and education, should be viewed as a core part of mainstream Australian life. Read more: When the Coronavirus Supplement stops, JobSeeker needs to increase by $185 a week[19] Our insights also demonstrate that while longer-term reliance on Newstart is an important policy issue, short-term reliance is underestimated. They also shed new light on the increasing share of recipients — especially women — who are facing irregular payments due to suspensions. Along with ongoing concerns about the adequacy[20] of income support payments - highlighted once again by a recent Senate inquiry[21], as well as by business groups like the Australian Retailers Association[22] — this raises questions about the extent to which the Australian social security system is effectively fulfilling its stated mission[23], to improve the lifetime well-being of individuals and families.