Telstra’s plan to split into three entities is the most radical shake-up of Australia’s largest telecommunications company since the Howard government began privatising it in 1997.

But as David Hetherington, a senior fellow at progressive think tank Per Capita, has suggested, it comes 23 years too late[1].

In privatising a public monopoly – controlling the copper wires and other infrastructure – the Howard government created a perfect storm for imperfect competition. It meant Telsta competed against other telcos to which it provided critical infrastructure services – hardly an ideal situation.

With the politicised and botched roll-out of the National Broadband Network, the market has become even murkier.

The NBN model championed by the Labor governments of Kevin Rudd and Julia Gillard – fully replacing the century-old copper-wire network connecting the nation’s homes and business with fibre optics – might have corrected the mistakes made in in the way Telstra was privatised, putting monopoly infrastructure back in public hands.

But the Abbott government neutered that by choosing to roll out a half-baked NBN, and now the federal government has its eyes on privatising the broadband network.

This is why Telstra wants to split into three entities. It is positioning to acquire NBN, putting itself back in a monopoly position. That might be good for shareholders. But it’s not good for competition and consumers.

Telstra’s plan[2] is this. Its existing infrastructure business, InfraCo, will continue to operate Telstra’s fixed-line assets. Mobile infrastructure will be hived off to form InfraCo Towers. The third entity, ServeCo, will own the active parts of Telstra’s mobile phone business, which includes its radio access network and spectrum assets that maintain the network’s coverage.

This makes strategic sense for Telstra.

In 2010, to make way for the National Broadband Network, the Australian parliament passed legislation requiring Telstra to split its retail and wholesale division, and sell its copper and cable broadband networks to the government-owned NBN Co.

Analysts[3] at the time said it was a plus for Telstra as it would get a return on its ageing assets and free it up to focus on higher-margin revenue businesses such as its Next G Mobile and HFC Cable networks.

But it has lost an estimated A$3.5 billion[4] in earnings from giving up control of its network. 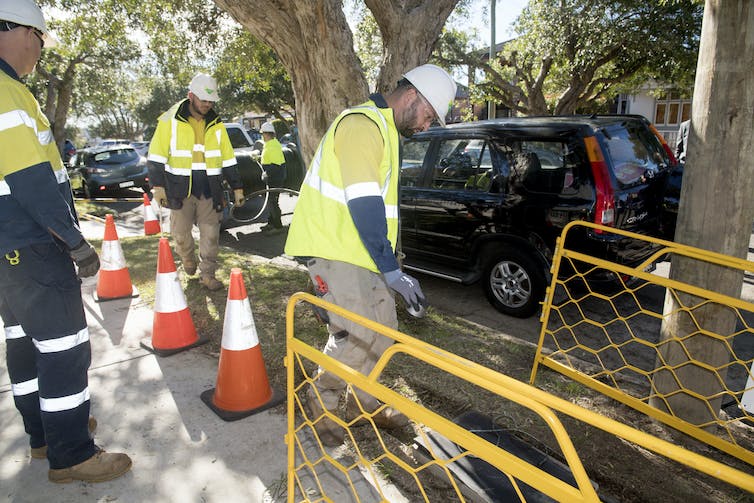 Contractors roll out the NBN network in Sydney in July 2017. Brendan Esposito/AAP

Positioning for a privatised NBN

The split will give Telstra the opportunity to acquire a privatised NBN.

Federal Communications Minister Paul Fletcher last year ruled out[5] any chance of Telstra acquiring the NBN. No entity delivering retail telecommunications could own the broadband network, he said. “NBN cannot be owned by a vertically integrated telco.”

The restructure answers that: it won’t be Telstra buying NBN but InfraCo.

The government has indicated at some point their intention is to privatise NBN and we wanted to make sure we had the optionality at that point to make sure we are at the table.

Analysts now say Telstra is the most appropriate partner for a privatised NBN. It could potentially deliver a better service for NBN customers and create a more efficient Telstra.

Read more: What should be done with the NBN in the long run?[7]

Certainly NBN Co isn’t doing very well. In February it reported a half-year net loss after tax of A$2.8 billion[8], adding to consecutive multibillion-dollar losses. It latest half-year result was a big improvement, but still a A$648 million loss[9].

The NBN’s biggest problem is that its creation has been muddied by politics.

The Abbott Coalition government (elected in 2013) proclaimed it could deliver the NBN for less money by cutting back from a purely fibre-optic network to a mixed bag of fibre, coaxial cable, a century-old copper network and second-rate technology[10].

Read more: Around 50% of homes in Sydney, Melbourne and Brisbane have the oldest NBN technology[11]

It promised to deliver the NBN for $29.5 billion, rather the estimated A$50 billion for Labor’s plan. The result: costs have blown out fixing outdated technology[12] and NBN Co has delivered an inferior product.

The NBN is way over budget, over deadline and is delivering a product that’s slow and expensive. Global rankings of download speeds show Australia in 62nd place. That puts it just ahead of Montenegro, Kosovo and Kazakhstan, but trailing Uruguay.

Cause for competition scepticism

Telstra’s chief executive, Andy Penn, says the split[13] will improve efficiency post-NBN and ensure customers will get the best possible service. But its track record doesn’t necessarily support such confidence.

In 2011, for example, the Australian Competition and Consumer Commission expressed concern[14] about Telstra’s insufficient assurance its wholesale business would treat its former retail arm and its competitors equally during the rollout of the broadband network. The competition watchdog green-lighted[15] the separation plan only after Telstra made changes including on pricing transparency.

Certainly Telstra is a technology leader in areas like mobile. But its customer service is notoriously bad. Just try calling Telstra. It is not an easy company to deal with compared to some of its competitors in the mobile and broadband retail market.

There should be scepticism about how effective the restructure will be and whether it can deliver a better NBN.

Private monopolies are rarely the best solution for customers.