In another round of the increasingly bitter exchanges between China and Australia, a columnist for China’s Global Times, Yu Lei, suggested that a further decoupling from China will make former Singapore Prime Minister Lee Kuan Yew’s famous prediction a reality[1]:

Australia would become the “poor white trash of Asia[2].”

The “white trash[3]” debate took place 30 to 40 years ago and caused a lot of hand-wringing.

Yet, contrary to predictions at the time, Australian incomes and living standards have remained comfortably above most of our Asian neighbours.

That’s not because we have performed spectacularly well. Australia ranked 12th in the OECD ranking in the early 1980s and it now ranks 10th or 11th.

But growth rates in Asia have slowed as the easy gains from technological progress have been exhausted.

Although the racially charged imagery of white trash attracted attention, much of the angst in the 1980s was about our standing within the group of rich countries. 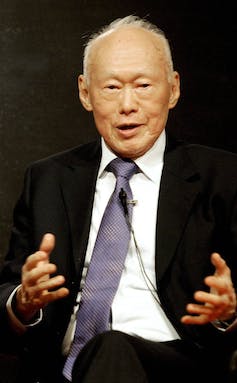 The key talking point was that while Australia was thought to have had the world’s highest[4] income per person in the late 19th century, it had fallen to 12th in rankings of rich countries.

A further decline was widely predicted in books like Australia, The Worst Is Yet To Come[5].

I criticised this line of thinking[6] at the time on the grounds that our number one position in the 19th century rested primarily on the demographic structure of what was still a frontier society, dominated by working age males.

In addition, Indigenous workers contributed to output but weren’t counted as part of the population.

Once I adjusted for these factors, Australia turned out to be in the middle of a group of rich countries in the late 19th century, just as it was in the late 20th.

Interestingly, a similar point can be made about Singapore today.

Our ranking hasn’t changed much since the 1980s

While most other Asian countries still have income levels below those in Australia, Singapore appears on lists as one of the richest countries.

This is partly due to the fact that one-third of its workforce is made up of migrant workers, many living in Third World conditions and sending remittances home.

The high number of migrant workers results in a high ratio of employment to measured population (since the families aren’t counted). As well, because migrant worker wages are so low, Singapore’s citizens can afford to hire migrants as domestic servants and for other purposes.

After correcting for these biases, Singapore has about the same income per person as Australia, but with a massively-unequal distribution.

How much does all this matter to the typical Australian family? Hardly at all.

Read more: China's leaders are strong and emboldened. It's wrong to see them as weak and insecure[7]

For any given family, living standards depend more on the distribution of income, and on the ups and downs of the labour market, than on variations in Australia’s performance relative to other developed countries, or relative to our Asian neighbours.

Getting domestic policy right on issues like employment and health care is far more important than “international competitiveness” – even more so during the pandemic.

Now let’s turn to the suggestion that, in the absence of more compromise with China on trade and policy issues, we will indeed end up as poor white trash.

We need China, but we’d manage without it

The obvious threat is to our exports and, in particular, iron ore which is our biggest single export and goes mostly to China.

On the face of it, it’s a big deal. Australia exports just over A$100 billion a year worth or iron ore, mostly to China, but only a fraction of this money represents income for ordinary Australians.

The mining industry in Western Australia employs about 100,000 people – less than 1% of Australia’s workforce. Their wages amount to about $10 billion a year.

In addition, major iron ore mining companies pay around $15 billion a year in royalties and company taxes. The combined income flow is about 1% of Australia’s national income.

Most of the rest of the industry’s income flows overseas, to pay for imported equipment or as returns to overseas bondholders and shareholders.

And even if the China’s market was closed to Australia, there would be offsets.

Iron ore is a commodity, meaning that if China bought more of it from other producers such as Brazil[8], there would be less Brazilian iron ore in the market for other customers who would have a greater need for Australian iron ore.

And to the extent that Australian iron ore exports did fall, the Australian dollar would depreciate, making other Australian exports more attractive.

Read more: Why the Australia-China relationship is unravelling faster than we could have imagined[9]

Similar points can be made about other exports to China including Australian tourism and education services.

That’s not to say that we should be complacent about the risks of a breakdown in our trading relationship with China. A loss of 2% of 3 % of national income is comparable to the impact of a standard recession and would entail plenty of economic disruption with accompanying unemployment.

But, as the founder of modern economics Adam Smith ironically observed, there is “a great deal of ruin in a nation[10]”.

Losing access to China’s market would make us a little poorer, but it wouldn’t make us the poor white trash of Asia, not now, or any time soon.