The good news from Victoria’s road map to recovery is the stage 4 restrictions imposed in July are working, albeit more slowly than anyone wants.

The evidence also suggests the Victorian government’s “slow but sure” approach to easing those rules is the right strategy. Unless the risk of COVID-19 is suppressed, relaxing restrictions will not produce the economic recovery we want.

Under the plan announced by Premier Daniel Andrews yesterday, metropolitan Melbourne’s stage 4 restrictions are being extended till at least September 28, with some minor relaxations of curfew and exercise rules.

Then – if the number of new COVID-19 cases is fewer than 50 a day – there will be further relaxation of public gatherings and home visits. Child care centres will reopen, and about 100,000 workers in construction, delivery, manufacturing and gardening will be allowed to go back to work.

More substantial resumption of businesses activity won’t occur until at least October 26 – and only then if the average number of new cases over the previous two weeks is less than five a day.

If that is achieved, the government will allow most retail shops to open, and cafes and restaurants to serve patrons sitting outdoors. Hairdressers will be back in business, but not other beauty and personal care services.

From November 23, if there have been no new cases for 14 days, all retail will reopen, and hospitality restrictions will relax further.

For regional Victoria, Andrews said, it would likely be just be a matter of weeks before moving to “a very different range of settings compared to metropolitan Melbourne”. 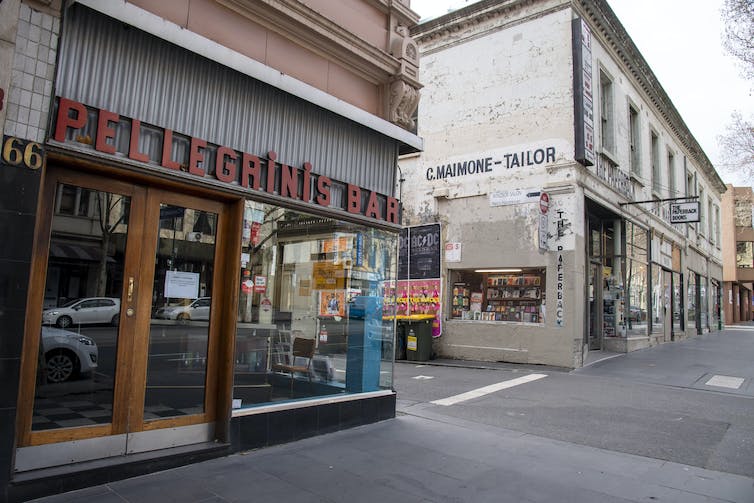 Blaming the lockdown, not the pandemic

Critics of the Victorian government (and lockdowns generally) have argued its containment measures have caused more economic and social damage than would have been caused by the virus itself.

Read more: Melbourne's second lockdown spells death for small businesses. Here are 3 things government can do to save them[2]

But others argue the short-term economic cost is more than justified by the longer term benefits. They point to evidence suggesting the economy will only recover once COVID-19 is eliminated and the community again feels confident to socialise and shop as before.

University of Chicago economists Austan Goolsbee and Chad Syverson, for example, have analysed consumer behaviour[3] in neighbouring regions with different social distancing restrictions in the US. They found voluntary changes in behaviour to reduce risks of catching COVID-19 were the major driver of lower economic activity. Government-imposed restrictions, they calculated, accounted for less than 12% of the total effect.

Read more: Vital Signs: the cost of lockdowns is nowhere near as big as we have been told[4]

Victoria’s experience may provide more evidence on what is really driving the slowdown in economic activity.

Specifically, we can examine whether decreases in the number jobs appear to correspond more to growth in the COVID-19 caseload or to the timing of imposition of government restrictions.

A number above zero means Victoria has lost a smaller share of its jobs than other states. A number below zero means a larger proportion of jobs have been lost.

As the chart shows, Victoria was following closely with other states till late April, then lost slightly more jobs through to late June.

But once COVID-19 re-emerged in late June, job losses in Victoria accelerated. By early August Victoria had lost about 4% more jobs than other states.

The chart below shows how job numbers in accommodation and food services and arts and recreation services have changed in Victoria relative to other states.

These are the two sectors most affected by COVID-19, due to high levels of personal contact between and among customers and staff. The big question is to what extent the effect on employment in those sectors has been due to government rules or consumer behaviour.

The chart shows Victoria’s jobs changes in these two sectors were relatively consistent with the the rest of the country until June. (Arts and recreation did slightly better, food and accommodation slightly worse.)

The situation began to worsen in June with Victoria’s second-wave outbreak. This happened even before the Victorian government imposed stage 3 restriction on July 4.

In the two weeks prior to going back to stage 3, Victoria went from an average of about 16 new cases a day to 72 cases a day. Over the same period, the number of jobs in Victoria in accommodation and food services fell by 3%, and in arts and recreation services by 4.7%, compared with the rest of Australia.

Read more: The costs of the shutdown are overestimated -- they're outweighed by its $1 trillion benefit[5]

As well, after the imposition of stage 3 restrictions the pace of decrease in jobs in Victoria was relatively steady. It matched the rise in COVID-19 cases (to an average of more than 450 a day in early August). Job losses do not seem to have been bunched around the dates restrictions were imposed, as might be expected if those restrictions were the main explanation for job losses.

All of this suggests that while the Victorian government’s path to remove restrictions will undoubtedly influence the level of economic activity in the months ahead, relaxing restrictions immediately would not bring the economy back to where we were in March.

It would only make the road to full recovery much slower and more uncertain.