Suddenly, the idea of a “job guarantee” is back in vogue.

Lawyer, academic, land rights activist and founder of the Cape York Institute Noel Pearson[1] has come out of it favour of it, University of Newcastle labour market specialist Bill Mitchell[2] has a document before the prime minister, and the Per Capita think tank is pushing for a youth-only guarantee[3].

The idea is that the government would make an unconditional job offer at a minimum wage to anyone willing and able to work. There would be no need for the Newstart unemployment benefit (now called JobSeeker).

The buffer of jobs on offer would “normally be small and would shrink as private sector activity recovers[5]”.

It is not widely known that it’s been tried before, by the Keating government in 1994. The scheme was limited to the long-term unemployed, making it more manageable than a scheme that offered employment to everyone who was unemployed.

The centrepiece of Working Nation[6], unveiled by Prime Minister Paul Keating in February 1994, the so-called “Job Compact[7]” guaranteed subsidised employment for six to 12 months to everyone who had been unemployed for more than 18 months.

This article draws on my research[8] into what happened, including interviews with senior government officials from that time.

The idea was that paid work experience in regular jobs would improve their chances of securing unsubsidised jobs by renewing their confidence and skills, and instilling confidence in employers about their ability to work.

We started off wanting to guarantee the long-term unemployed a job. We thought that’s what this agenda was all about (official, department of prime minister and cabinet)

The original plan was for most of the job placements (70%) to be offered through a private sector wage subsidy scheme, Jobstart, which had a good record for placing people in ongoing jobs. 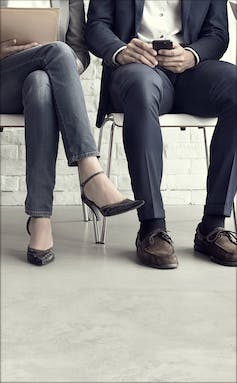 Even with payment, employers weren’t keen to take on subsidised applicants.

When fewer private employers than expected took on Jobstart wage subsidies (134,000 in 1995) the job guarantee could only be fulfilled by expanding public and community sector jobs (to 123,000 positions).

As has been the case in other overseas[9] public sector job creation schemes, these jobs often turned out to be very different to mainstream jobs, reducing transitions to unsubsidised jobs.

And as the number of subsidised jobs ballooned, their quality declined. And instead of case managers matching jobs and experience to needs, the process became a conveyor belt.

And the language of the program became increasingly punitive.

You often start with a great idea and later it gets modified. Focus groups showed the public were really down on the unemployed and sole parents. That got reflected back in the ‘reciprocal obligation’ language, which was not how we originally had it (official, department of prime minister and cabinet)

Only one third of the participants were in unsubsidised jobs three months after the subsidies ended. The official evaluation of the “net impact” of the program (the extent to which it increased the probability of employment) was a 28% improvement from Jobstart, 11% for Jobskills and 4% for New Work Opportunities.

The Job Compact was expected to reduce the number of people on unemployment benefits for more than 18 months by 50% in its first year, but the actual decline was less than 20%[10].

The official evaluation pointed to its “high cost and low outcomes[11]”, and concluded it was “not the most appropriate strategy for assisting the long-term unemployed”.

It said subsidised public sector jobs should be created only to help “the most disadvantaged clients who may not meet the job readiness requirements of many private employers”.

Read more: When the Coronavirus Supplement stops, JobSeeker needs to increase by $185 a week[12]

Right now, 700,000 people have been on unemployment benefits for more than a year, making the case for some sort of large-scale investment in paid work experience and training strong.

Subsidised jobs can help reduce long-term unemployment, as shown by the success of the Future Jobs Fund[13] in the Britain and small-scale wage subsidy schemes[14] in Australia.

But Australia’s experience with the Job Compact shows guarantees are no panacea.

When subsidised jobs schemes are scaled up to offer jobs to everyone who is unemployed, their costs increase and their quality and their impact on future employability diminish.

We will need large-scale programs to create jobs, and we should offer the 700,000 people who are already long-term unemployed all the help they need to secure them.

But that needn’t always mean subsidised jobs. Many who are unemployed will benefit from training, others from their employment service provider partnering with an employer to skill them up.

Higher unemployment is a price we’ve paid to control the virus. It will take a mix of measures to ensure that cost is only temporary.