If you’re reading this article in your office, chances are the air conditioning is set to around 22°C. Setting the temperature to 25°C could cut your office’s daily air-conditioning energy consumption by 18%, drive down electricity bills and help save the planet.

But would it be too hot to think?

Not according to our study[1], published recently in the journal Building and Environment[2].

Our experiment found that office workers’ “cognitive load” – the total amount of mental effort being used in the working memory – was not significantly affected by a little temperature boost.

What we did and how we did it

To test our hypothesis, we asked volunteers to sit some performance tests, under various air-con temperature settings. We ran the experiments at 22°C and 25°C.

Our experiments took place in the University of Sydney’s Indoor Environmental Quality Laboratory climate chamber. It has a floor area of about 25 square metres, and is designed such that it’s easy for us to control the room temperature.

Participants sat at separate workstations, each consisting of a desk, a chair, and a computer.

A total of 26 office workers (12 men and 14 women) volunteered as subjects in this study.

A little over 70% of the participants were aged between 31 and 50 years and about a third were aged 30 years or under. These people had diverse employment circumstances, ranging from professional (35%) and technical (31%) to managerial (15%) and administrative (19%). Participants wore their normal office clothes, and were also free to adjust their clothing as they liked during the experiments.

All participants, in groups of two to four, were given half an hour to acclimatise to the environment, and then sat two one-hour tests (with a break in between the tests).

Before they sat the tests, our participants were fitted with a number of electrodes worn via a headset, so we could monitor their brain activity and “cognitive load” – how hard their brains were working – through an electroencephalogram (EEG). They also wore a heart rate monitor.

During each one-hour experiment session, participants first filled in a questionnaire designed to ascertain how comfortable they were with the room temperature. Then it was time to test how their brain power coped at the different temperature settings.

The first test they did is called the Cambridge Brain Science[3] (CBS) test, which has been used in many studies aimed at measuring cognitive performance. 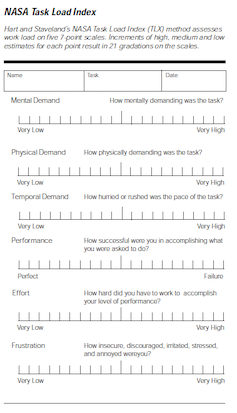 Then, we asked them to fill in a questionnaire aimed at determining how challenging they found that task. This questionnaire is called the NASA Task Load Index[6] and asks participants questions such as: how much mental and perceptual activity was required? Was the task easy or demanding, simple or complex?

After a 10 minute break, we then asked our participants to complete three different difficulty levels of another brain-power test, called the Paced Auditory Serial Addition Test (PASAT)[7]. Again, when the test was over we asked them to fill in the NASA-TLX questionnaire to ascertain how cognitively challenging they found the test.

At the end of the one hour experiment session, our test participants then completed the thermal comfort questionnaire again.

Our results showed that their CBS test scores were not significantly affected by temperature.

In fact, many of the participants performed even better at a warmer temperature of 25°C, (but this could be due to what scientists call “the learning effect”, meaning it is not uncommon to do better the second time you sit a test compared to the first).

And when we analysed and compared the EEG and heart rate monitoring results during the PASAT tests, we did not find any significant difference, whether the room temperature was at 22°C or 25°C.

Why does this matter?

A typical Australian commercial lease stipulates indoor air temperatures of between 20°C and 24°C. This means that building managers or landlords who set the indoor temperature higher than 24°C during summer run the risk of breaching leases and incurring penalties.

However, the research shows there is no empirical evidence that this temperature range should be maintained. The significant over-cooling in commercial buildings not only often leads to office workers complaining their workplaces are too cold, but also affects building energy use, greenhouse gas emissions and electricity bills.

The standard 22°C setpoint for office air conditioning has prevailed in Australia for over a decade now. Many employers may fear that boosting the office temperature will make it too hot to think, and reduce worker productivity.

However, our study shows that boosting the office temperature a little can save energy and keep office workers comfortable without sacrificing their cognitive performance.