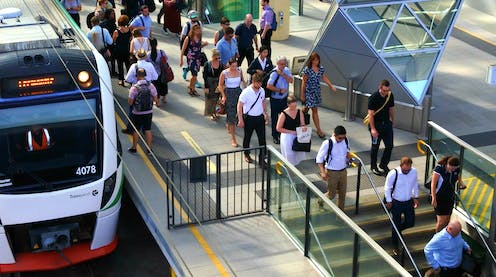 When it comes to the outlook for employment, there’s good news and bad news.

To begin with the good news: with a bit of luck, the next few months will see the fastest expansion of employment in Australia’s history.

The bad news? Well, there’s virtually no chance it will be enough to get employment to where it was in March, before the COVID-19 shutdown.

In fact, even on a best-case scenario it’s likely by the end of September we will only be back to the worst points of the 1980s and 1990s recessions.

Other Bureau of Statistics data suggests that between mid-March and mid-April employment fell 1.3 to 1.6 million[1].

Treasury[2] estimates that the planned reopening of the economy will result in a bounceback of 850,000 jobs.

Suppose that a decrease of 1.3 million turns out to be the trough and recovery is uninterrupted.

Read more: How a tightening of wallets pushed Australia into recession[3]

The turnaround would be a considerable achievement.

But even if it happens, we will have only recovered to around the worst points of the 1980s and 1990s recessions, where employment decreased by about 4 per cent.

Employment won’t recover fully in this best-case scenario because some parts of the economy will still be shut down (including international travel) and COVID-19 will continue to cause many consumers to spend less than usual.

That best case is unlikely

There are several reasons to worry about whether the best-case can be achieved.

First, job gains from reopening businesses are likely to be offset by losses in employment in other industries suffering from reduced consumer demand and business investment.

While cafes and restaurants may start up again, Bureau of Statistics data shows that employment has begun to decline[4] in large industries such as construction and professional services.

Second, the effects of reopening may not be all we expect. Labour hoarding – where businesses retain more workers than needed during an economic downturn - might mean that reopening doesn’t translate into as many new jobs as expected.

This is likely to be particularly acute given that JobKeeper has effectively paid employers to subsidise labour.

Third, impacts from longer-run structural changes in the economy might begin to cause employment losses, especially as JobKeeper is partially unwound.

So what are we to do?

Even under the best-case scenario employment will be substantially lower than before COVID-19 well into the future. And we can’t presume the best-case will happen. A compelling case exists for substantial ongoing economic stimulus post-September 2020.

The labour market will not have fully recovered by then. To remove stimulus would only set back recovery. The question therefore should not be: is stimulus needed, but rather, what size and type of stimulus is needed.

Continuing JobKeeper beyond September 2020 could have an important role in providing income security to affected workers and macroeconomic stimulus.

It is a known policy, it operates effectively, and it appears to have community support. Replacing it with an alternative type of stimulus could risk harming confidence and the recovery.

An extra (and considerable) advantage of continuing JobKeeper is allowing time for a staged transition away from it. Stopping it will inevitably push up unemployment.

A staged transition would spread out that adjustment rather than creating a shock in September.

A transition from JobKeeper could be done via stepped decreases in the size of payment or progressively restricting eligibility as industries or businesses recover. The transition could begin at the end of September, or earlier if it is judged that employment is likely to have already recovered substantially before then.

Read more: We need to plan for life after JobKeeper now. We need to make it portable[6]

An objection to retaining JobKeeper is that it is preventing adjustment in the labour market, and disrupting the normal process of businesses starting up and failing.

There are two responses.

First, the question is not about whether JobKeeper should be permanent, but about the timing of its removal.

Whenever it is (or starts to be) removed, labour mobility will return and any firms on life support will disappear. Having this happen via a staged transition is better than having it happen all at once.

Our number one priority has to be maintaining and restoring employment.