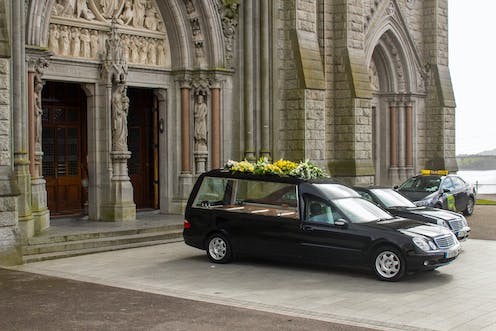 TV advertisements for funeral insurance often warn of the huge financial impost created for families when you die. They argue the only way to protect your loved ones is to take out insurance. However, what these ads don’t tell you is that funeral insurance is a financial product and not really any different from life insurance, except the cover is usually for a much lower amount.

This means the benefit paid upon your death is a cash amount, without any restrictions on whether it is used for your funeral or not.

Despite more consumer-friendly funeral insurance products entering the market in recent years, most policies have stepped premiums[2] which increase as you get older. Funeral insurance sellers are also still engaged in aggressive selling techniques, such as offering a gift card for buying a policy.

These fundamental problems lead to high policy lapse rates[3]. That is, consumers take out a policy and then cancel or the policy is cancelled by the insurer for non-payment of premiums. While this is not unusual, the very high lapse rates make selling funeral insurance very lucrative for insurance companies.

In 2014 the Australian Securities and Investments Commission (ASIC) reported[4] there were nearly three quarters of a million Australians covered by funeral insurance with an average benefit amount of A$8,859. Given the findings of a 2017 report[5] suggesting average cost of a moderate “full service” funeral is around A$6,000, it appears many Australians are over-insuring.

Since most funeral insurance is sold with stepped premiums, many consumers on fixed incomes (pensioners and retirees) find the premiums difficult to service as they increase over the longer term. A study by the Combined Pensioners and Superannuants Association in 2011[6] found that if you took out a policy at 50, you could end up paying more than A$140,000 in premiums for a A$6,000 benefit under some policies if you lived until you were 80.

The average annual premiums quadruples for consumers aged over 50, rising from A$336 for those aged 50–54 to A$1,344 for those aged 80–84, the 2014 ASIC report found. With ever increasing life expectancies[7], you can be sure that for most funeral insurance premiums people will likely end up paying many times more than any benefit paid.

A staggering 80% of policies are cancelled each year[8], 55% occurring within the first year. This is because many consumers do not understand important policy features and are concerned about their purchase after a period of time, having reflected on the details and benefits of the policy.

Paying for your funeral

Paying for a funeral can be a financial hardship and there are options to pay for it.

One option is a direct committal that takes care of only the disposal and documentation requirements required for a funeral. Many funeral directors and online providers offer this budget option for as little as A$1,200[9], but more likely around A$1,800 in a large city such as Sydney or Melbourne.

You can then entrust your relatives, or your executor (if this is indicated in your will), to celebrate your life in any way you wish, a memorial without the expense.

You could also buy a pre-need or prepaid funeral. This product is rigorously regulated by state consumer laws.[10] It gives you some control as you know exactly what you are buying (such as ceremony, coffin, disposal). The only downfall is that your funeral is “locked-in” to a particular provider and stories of aggressive upselling to relatives[11] have been reported.

In Australia, your loved ones or executor are able to access your funds in your bank or even superannuation accounts to pay for a funeral. If you are on a government benefit, your partner may receive a bereavement payment to contribute toward funeral expenses. Many funeral operators will also allow your relatives to pay for your funeral by instalments.

Funeral bonds are also financial products[13] and depending on the amount you invest in bonds, you are likely to limit any financial legacy resulting from your funeral for relatives and loved ones. However, funeral bonds also carry the same risks as other bonds.

Funeral insurance providers attempt to sell peace of mind to consumers. However, that peace of mind can become a financial burden as you age and premiums increase. It also may not even be used for that send off that you had imagined.