It has been said we are “at war” with the COVID-19 coronavirus. I’m not drawn to martial metaphors, but that’s not wrong.

Another way to put it is that we, as a society, are in a strategic interaction with the virus.

The right analytic tools to study strategic interactions come from the field of game theory.

Read more: Economic theories that have changed us: game theory[1]

Mathematicians and economists have developed these tools in earnest since John von Neumann and Oscar Morgenstern published Theory of Games and Economic Behavior[2] in 1944.

One of the most important ideas in game theory – something taught in undergraduate economics classes around the world – is thinking about the “equilibrium” of a game. That is, a situation where no player can improve their payoff by unilaterally changing their strategy.

John Nash (subject of the movie A Beautiful Mind), John Harsanyi and Reinhard Selten won the 1994 Nobel Prize in Economic Sciences[3] for “their pioneering analysis of equilibria in the theory of non-cooperative games”.

It is these lessons a variety of Australian commentators have ignored in their claims social-distancing measures are too extreme.

John Roskam, the head of free-market think-thank the Institute of Public Affairs, has complained[4] that “25 million Australians have been placed under indefinite house arrest, children’s playgrounds are locked and patrolled by security guards, and the police fly drones over beaches and parks”. Future generations, he says, “will quite rightly question whether there could have been a better way”.

The Australian’s Adam Creighton argues[5]: “Rather than bluntly taking a sledgehammer to economic activity, it would be better to urgently boost the capacity of the health system, let the bulk of the population get on with their lives and take special precautions with at-risk groups.”

Our game with the virus

The payoff to the virus is simple. It wants to infect as many of us as possible.

The payoffs to us are more complicated – a combination of health and economic effects.

Economists like to distinguish between games that are played once, games that are repeated more than once but where the rules, players, and payoffs are the same each time, and games where players move in sequence. What we are always interested in is the game’s equilibrium, and the payoffs to the players in that equilibrium.

What we are seeing right now in Australia, in terms of the health and economics outcomes, is an equilibrium phenomenon.

We’ve put in place certain social-distancing rules – not as strict as some jurisdictions but stricter and sooner than others – and the economy is taking a hit because of the measures.

Official data show[7] we are “flattening the curve[8]”.

When commentators conclude these measures are not needed because of the low infection and death rates in Australia, they are making an error of staggering proportions, with potentially grave implications.

They should be looking at the counterfactuals: New York or London, or Italy or Spain. Those places acted too late. Now Madrid is using an Olympic ice rink as a morgue and New York is planning “temporary internments[9]” of the dead. 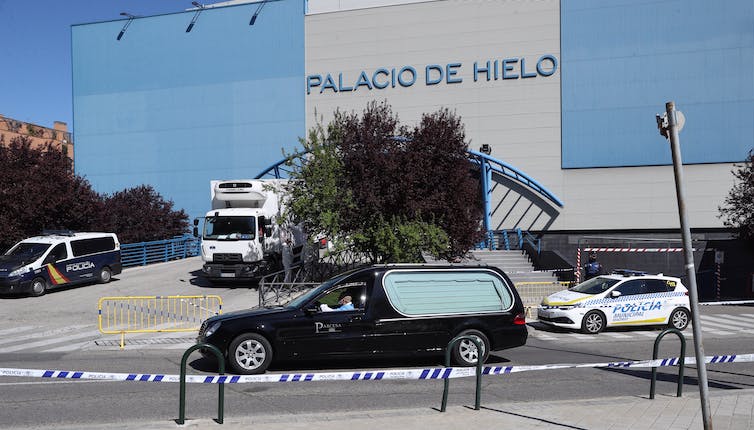 The Palacio de Hielo (‘Ice Palace’) ice-skating rink in Madrid has been repurposed as a makeshift morgue to store those killed by the coronavirus. Kiko Huesca/EPA

The best response to that is fairly drastic lockdown provisions. These should have happened sooner in Australia, but our leaders at least responded faster than plenty of places where infections and deaths are soaring.

As we go forward it’s important to remember the virus’s exponential capacity for growth means easing social distancing even a little bit could allow the infection rate to bounce back dramatically.

How our policymakers manage the rules of the game until we have a widely deployed vaccine will be very challenging. They’ll need to remember the lessons of game theory. Because this is not a game we can afford to lose.