It’s the ultimate bubble news perhaps, but this week the Department of Parliamentary Services put out a circular saying work was underway to ensure Parliament House “is prepared to manage any potential issues relating to coronavirus”.

Most immediately, hand sanitisers have been put around the place and cleaners are concentrating on “disinfecting high traffic touch points, particularly in the public areas”.

Goodness knows what will happen in the event the virus hits Parliament House, especially if the politicians are there. We can report, however, that so far the national toilet paper panic hasn’t threatened the spare rolls in the parliamentary lavatories.

The circular was a small reminder of how fast the COVID-19 situation is moving.

In just a week, we’ve seen a dramatic escalation. The travel ban has been extended and widened; it now prohibits the arrival of foreigners from Iran (announced on Saturday) and South Korea (added on Thursday) as well as from China, and there is enhanced screening for those coming from Italy.

We’ve had the initial locally-transmitted cases emerge. The first nursing home has been hit. The government has flagged the possible use of drastic biosecurity powers. The Reserve Bank has cut interest rates, and an official number has been put on COVID-19’s likely impact on the economy.

Scott Morrison has received praise for his handling of the situation, which is being contrasted with his cack-handedness during the bushfires.

(Notably, without the crisis, Morrison would have been on the back foot this week. It overshadowed embarrassing revelations at Senate estimates about the role of the Prime Minister’s Office in the sports rorts affair, and the Chief of the Defence Force, Angus Campbell, saying he had expressed concern to Morrison over the use of defence material in the PM’s notorious bushfire advertisement.)

Often secretive and downright slippery, on the coronavirus the government has shared information, and provided regular updates. It has acted strictly on the medical advice. The border closures are slowing the importation of the virus, allowing maximum time for local arrangements to be put in place.

Early on, some questioned whether the government was over-reacting. And the caution hasn’t been without cost, with about 90,000 students still unable to reach universities here. In a measure of the deepening crisis, that issue, at the centre of attention only weeks ago, has receded from public view.

Despite what it has done so far, the government’s real battle is just beginning. Containing the virus from spreading in the aged care sector, and from penetrating Indigenous communities will be critical tests for federal and state authorities. And if we reach the stage that draconian powers are used, they could be very controversial.

Then there is the economy.

Appearing before a Senate committee hearing, Treasury estimated the virus would shave “at least” half a percentage point from growth in the March quarter. That’s on top of the bushfires taking off an estimated 0.2% across the December and March quarters, mostly the March one.

In one piece of positive news this week, the national accounts showed 2.2% annual growth and 0.5% in the December quarter. Worse numbers had been feared, which would have left the economy in a weaker position for the difficult time ahead. 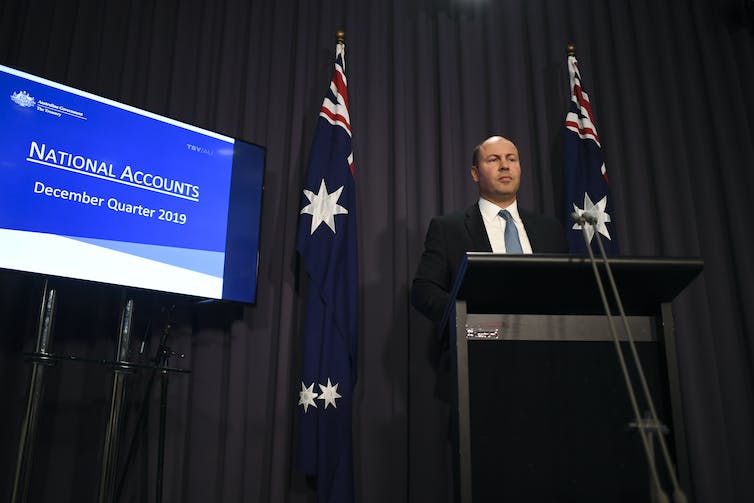 Lukas Coch/AAP[3] Still, the future looks very hairy. The government faces the prospect of a negative March quarter, and the knowledge the virus will still be infecting growth in the June quarter. Two negative quarters would be a technical recession, something the Rudd government avoided in the global financial crisis and the Morrison government is desperate to dodge in the coronavirus health crisis. In some ways this crisis is more complex to deal with than the GFC. Aspects of the public panic are irrational and so very hard to calm. The effectiveness of the planned stimulus could be limited by the difficulty businesses will have sourcing supplies from China, where the problem started. Even as he and his ministers grapple with their fiscal response, Morrison, a totally political animal, is always anxious to make a partisan point. The Coalition harks back to Labor’s spending too much in the GFC, and to flaws in programs. Well, now the Coalition will be tested in circumstances different from but also comparable to those faced by the Rudd government. It needs to keep growth going, spending enough (not too much, not too little) and choosing the right measures. And it must stay flexible. As Treasury secretary Steven Kennedy said at the Senate estimates hearing, “The government will need to be nimble. in how it watches how the shock unfolds”. “Go early, go hard, go households”, then Treasury secretary Ken Henry told Labor in the GFC. On the health side of the COVID-19 crisis, the government has followed the advice of Chief Medical Officer Brendan Murphy to go early and go hard. In terms of the economy, its concern about the budget has made it reluctant to get ahead of the game. Faced with dire forecasts, it is now rapidly pulling together an economic response. But it is not, at this stage, intending to “go households” – that is, to have a cash splash (although a change in the deeming rate for the pension will help some retirees). Next week, when it is expected to release its package, we will see how “hard” it will go to try to fireproof the economy. Treasurer Josh Frydenberg has confirmed the measures will run into billions of dollars, and indicated they’ll include some form of investment allowance. The government’s mantra is the package will be “targeted”, “measured” (the word “modest” has been dropped), and “scalable” – that is, able to be ramped up if the outlook deteriorates further. It will be centred on preserving cash flow and encouraging investment. Read more: Support package gains shape as GDP turning point swamped[4] Morrison says the package will be aimed at “keeping people employed and supporting jobs […] keeping business in business, so those businesses can support those jobs and the incomes of Australians. "It will have a focus on ensuring that we bounce back better on the other side of this,” he told parliament, “because there will be a strong recovery on the other side of the coronavirus”. The big question is: just how bad will things get until “the other side” comes into view? That will be crucial not just for many of Australia’s businesses and workers, but also for the Morrison government’s credentials as an economic manager.