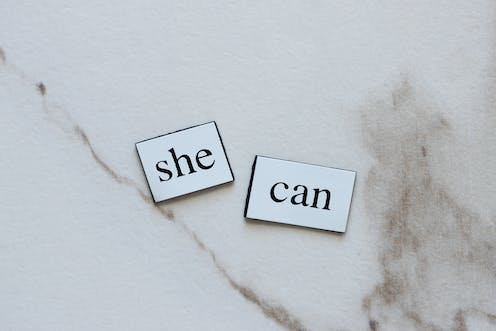 In the face of overwhelming evidence of gender discrimination[1] and sexual harassment[2], should we really devote energy to changing how people speak? Surprisingly, an emerging body of research[3] suggests we should. Gendered language – using “he” or “she” instead of “they” – is one of the root causes of gender inequality at work.

Speaking a heavily gendered language may highlight gender distinctions[4] in the mind of the speaker, leading to more pronounced gender roles and greater disparities in social outcomes across men and women.

Read more: The gig economy may strengthen the 'invisible advantage' men have at work[5]

But the fight over gendered language may easily seem frivolous. A group of 314 teachers in France recently declared they would no longer teach the rule that “the masculine prevails over feminine”[6] when it came to plural norms.

This initiative follows a similar case in Sweden[7] where teachers started replacing the pronouns “him” and “her” with an artificial genderless pronoun “hen”, which was subsequently introduced into the country’s official dictionary[8]. And in the New York Times, Carmel McCoubrey advocated using “they” as a gender-neutral singular pronoun[9], in place of the more awkward “he or she”.

What is gendered language?

Languages differ significantly in how gender is woven into their structure. Nouns have no gender in English but may be masculine or feminine in Spanish.

Languages also differ with respect to the gender structure of their pronouns. English, for example, distinguishes between male and female gender in the third person singular: he (masculine) versus she (feminine).

Finnish, on the other hand, a genderless language, only knows the neutral: hän (he/she). Other languages express gender even in the first or second person, such as Arabic: انتَ (anta – you, masculine) vs انتِ (anti – you, feminine).

Combining these grammatical rules allows researchers to rank languages on how gendered they are, and then investigate whether speaking a more highly gendered language is systematically associated with inequalities between men and women.

The impact of gendered language

Controlling for other relevant factors, in countries in which the dominant language is highly gendered, 11% fewer women work outside the house, a key measure of women’s financial independence and bargaining position within the household.

And this outcome is not some kind of accident. Instead it directly reflects support for gender inequality in employment.

In an international survey covering nearly 100 countries, speaking a gendered language significantly increases the share of the population that agrees with the statement[12]:

“When jobs are scarce, men should have more right to a job than women.”

The gender intensity of language also plays an important role in outcomes related to education, pay, and corporate leadership. Speaking a highly gendered language is associated with a two-year increase in the gender gap in educational attainment[13].

Read more: Why women and men too easily accept the gender pay gap[14]

Living in a country in which the dominant language is highly gendered is associated with a 25% increase in the gender wage gap[15], the difference in pay for otherwise similar men and women. It’s also associated with fewer women on corporate boards and in senior management positions[16].

Research also links gendered language to share of housework done by men and women[17], to public policies, including the length of maternity leave[18] and law requiring female representation in public office[19].

So, yes, gendered language matters, and it matters quite a lot.

As currently spoken, English is a mildly gendered language, as it does not have gendered nouns and, among its pronouns, requires gender only for the third person singular. The adoption of “they” as a gender-neutral third person singular pronoun, would make it non-gendered, the lowest category.

Over time, we could expect this change to decrease gender disparities across a host of measures, including wages, educational attainment, and leadership positions in corporate and political life. And that is something that everybody, regardless of their gender, should care about.