The unwillingness of the major (and other) banks to immediately cut their headline mortgage rates by as much as the Reserve Bank cuts its cash rate always attracts bad press, as well as condemnation from treasurers and prime ministers.

After the big four passed to variable rate owner-occupiers only 0.13-0.15 percentage points of this month’s 0.25-point cut in the Reserve Bank cash rate, Treasurer Josh Frydenberg said they had decided to put profits “before their customers[1]”, adding:

What we do expect the banks to do is to provide their customers with the best possible deal, and it’s very disappointing that they haven’t done that

How else do you describe it? I’ve never been one, whether as treasurer or prime minister, to give the banks a leave pass

Are the banks “profiteering”? Or are they right when they say their loan rates simply reflect their cost of funding?

My inquiries suggest that while there may indeed be some behaviour that could reasonably be described as profiteering, the banks’ complex funding arrangements explain much of their decisions not to pass on all of the past three interest rate cuts.

Most of the funds banks lend come from deposits and wholesale borrowings. They are typically provided for months or years rather than nights.

Read more: 0.75% is a record low, but don't think for a second the Reserve Bank has finished cutting the cash rate[4]

So the banks’ argument that their funding costs don’t move with the cash rate has theoretical merit.

But how can we assess whether it is valid in practice?

The figures cast doubt on the “profiteering” claim

One way is to look at the behaviour of the net interest margin (NIM) of the banks. This is the difference between the amount of interest they earn on loans and other investments over and above the interest they pay on their funding, expressed as a percentage of their interest-earning assets.

If they are “profiteering” by not reducing loan rates in line with funding costs, the NIM should increase. Has this happened?

The figures suggest not – although they are not published frequently enough to give a definitive figure for developments over the past few months. Note also that there are always other factors influencing the NIM. A shift into higher risk-lending, for example, could be expected to see an increase in the NIM to reflect higher loan rates charged for greater risk. 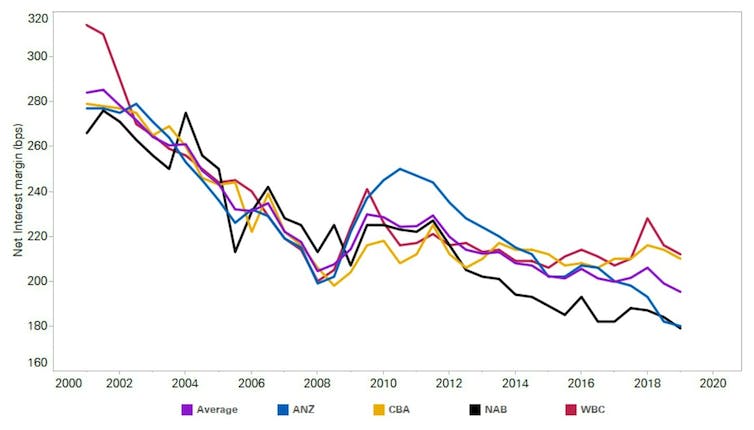 But the figures aren’t conclusive

The net interest margins of the big four have fallen markedly since 2010 and appear to have plateaued.

But that needn’t mean home borrowers are getting better deals.

The banks might be widening their margins on highly profitable home loans while narrowing them on others.

And even small changes in net interest margins (the kind not easily seen on graphs) can generate large dollar sums of the sort the banks need to offset the seemingly ever-mounting costs of compensation and fines resulting from the banking royal commission.

The difficulty of reaching a conclusion is compounded by the abundance of mortgage loan rates, such that it is the “headline” variable rate which attracts media and public attention, but which not all new borrowers pay.

Most banks offer significant discounts to new customers who are savvy enough to bargain and are good credit risks. There is not enough good contemporaneous information about what banks are charging these customers.

This isn’t to say that changes in the headline rate are unimportant. Headline rates are especially important because they apply to the mass of “back book” (existing) mortgage customers who are slow to rebargain or refinance.

Both headline and discounted rates matter

Unfortunately for those existing borrowers, those rates move slowly because they depend on the banks’ past funding costs. They are funded from a mix of short term and other borrowings for terms of three months to several years.

Only as that existing funding matures and banks can refinance at lower rates can the average cost of their funds decline – and even then not generally by as much as the cash rate. Bank average funding costs are necessarily less variable than the cash rate, such that even over time after long lags we can’t necessarily expect their headline rates to track the cash rate.

Read more: Cutting interest rates is just the start. It's about to become much, much easier to borrow[6]

Of course, it would be foolish to rule out the possibility that the major banks, all wearing costs as a result of the royal commission, are attempting to recoup some of those costs by a less than complete pass-through of their average funding costs.

If they are, the offerings of alternative mortgage providers with different funding models will be become relatively more attractive and there will be more in it for customers who switch.

Ultimately, it’s customer awareness and action that will inhibit bank “profiteering”, far more than jawboning by politicians and the media.