The budget is bouncing out of deficit and is set to stay in surplus for the decade to come.

That’s what the April budget[1] and the final budget outcome for 2018-19[2] tell us, and Thursday’s report from the Parliamentary Budget Office doesn’t say any different.

What it is allowed to do, and does once a year in a publication entitled medium-term fiscal projections[3], is to set out the implications of those projections.

Those implications, spelled out on Thursday, show the projected budget surplus to be so fragile as to be unrealistic, except the parts that rely on much higher personal income tax collections.

That’s right: much higher income tax collections per person, even after taking into account the coming decade of legislated tax cuts. 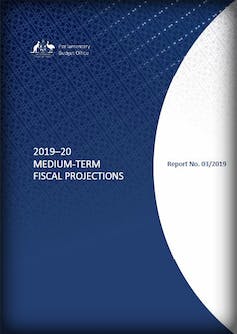 Parliamentary Budget Office[4] But it won’t be higher for all of us. The middle fifth of earners will pay far more of their income in tax in ten years’ time under the government’s projections, according to the PBO’s calculations. Instead of paying 14.9% of their income in tax, by 2028-29 they will pay 18.8%. That’s after taking into account the long-term tax cuts the government pushed through parliament in May and went to the election on. Without those legislated tax cuts, they would have been paying an extra 6.3% of their income in tax. With the legislated cuts (and others pencilled in by the PBO to keep the government’s tax take within its promised ceiling[5]) they will be paying an extra 3.9%. Put another way, the government’s tax cuts will undo some of the damage caused by bracket creep as more of each pay packet climbs into higher brackets, but not most of it. It’s the same for pattern for the second-lowest fifth of earners. They will move from paying 5.3% of their income in tax to 9.9%, a near doubling, which is taken is taken into account in the surplus projections. Read more: Those future tax cut promises... they're nowhere near as big as you'd think[6] The second-highest fifth will move from paying 22% of their income in tax to 23.4%, even after the tax cuts. The bottom fifth, who don’t pay much tax, will move from paying 0.6% to 1.2%. Highest earners escape But workers in the top fifth, which at the moment is workers earning above A$90,000, won’t pay a cent more, at least not on average. The government’s projections, as spelled out by the PBO, have them paying less of their income ten years from today than they do today. Put another way, they are the only fifth of the population that won’t be expected to wear pain to keep the budget surplus. 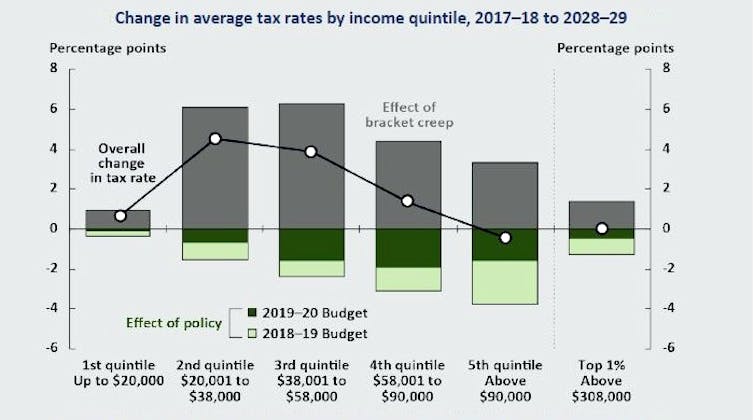 Parliamentary Budget Office[7] There are other contributors to the budget surplus. One is a pretty hefty assumed decline in government spending over the next decade, amounting to 1% of GDP, taking it from 24.9% to around 23.9% of GDP. If it was all to come from wages it would be the equivalent of firing every 25th public servant. But the PBO says the bulk of it is projected to come from tighter eligibility criteria for payments such as the Newstart unemployment benefit and the disability support pension. And it sounds this warning: The spending restraint seen over the past few years may be increasingly difficult to maintain over coming years given the length of time over which restraint has been applied, the pressures emerging in some spending areas, and the potential need for fiscal stimulus, noting that the projected improvement in the budget balance is mildly contractionary. What it is saying, gently, is that it the longer the government attempts to restrain spending (for instance by imposing tough conditions on access to benefits and using debt collectors to recover alleged overpayments[8]), the harder it will get. And it is saying the government might need to spend in ways it hasn’t accounted for, including on measures to support the economy in the event of a downturn. Budget conventions to the rescue The projections assume the opposite of a downturn. No blame should attach to this government for them, but our rather odd budget conventions dictate that the worse the economy is, the better the budget’s projections for economic growth. That’s right: the weaker our current economic growth, the stronger the budget’s projections for future economic growth. The thinking is that over the long term, the economy should grow at roughly its long-term average growth rate. To get there when the economy is weak, as it is now[9], the budget assumes several years of stronger than normal economic growth to catch up. Read more: Their biggest challenge? Avoiding a recession[10] In this case it’s five years of stronger than normal economic growth. The PBO contents itself with the observation that economic growth that was merely normal (or worse, remained weaker than normal) for some of those years would have a “significant and compounding effect on the budget position over time.” The surplus is far from assured, and it shouldn’t be. The government might well find that it can’t and shouldn’t restrain spending on payments as much as is projected in the decade ahead, and it might find it needs to spend to support the economy. It will almost certainly find that lifting the tax take on middle Australians from 14.9% of income to 18.8% is intolerable.