Some initial coin offerings seem like scams (and some are), but behavioural research[1] shows our emotions are part of why people buy in to cryptocurrencies for fruits and vegetables[2] or crypto trading[3] even if cool-headed rationality screams at us not to.

An initial coin offering[4] is just like an initial public offering. But, instead of shares, what’s being sold are cryptocurrency “coins” or “tokens”. These are similar to virtual currencies found in computer games, enabling you to buy goods or services within an ecosystem.

Around half[5] of the initial coin offerings launched last year[6] have already disappeared or failed. This has potentially cost investors hundreds of millions of dollars[7].

Read more: Explainer: what are initial coin offerings (ICOs) and why are investors flocking to them?[8]

The boom in initial coin offerings is a textbook example of how our emotions drive us[9] to be overly optimistic[10] and to become fixated[11] on the spectacular gains made by others. Companies and designers can also appeal to our emotions and our conceptions of ourselves by appearing to adopt moral positions[12].

This mix of emotions lets “irrational exuberance[13]” over getting rich quick (while doing the world a favour) overwhelm our reason and willpower[14].

Early investors in initial coin offerings made an absolute killing[15], which led to a lot of media coverage of newly minted “crypto-billionaires[16]”.

This is a recipe for creating what’s called “optimism bias[17]” because people become fixated[18] on the spectacular gains made by others, playing into a lust for wealth.

Comparing our meagre incomes to these huge profits also means, deep down, we become terribly afraid of losing our chance at riches, stimulating feelings of stress[19] and what’s known as “loss aversion”. 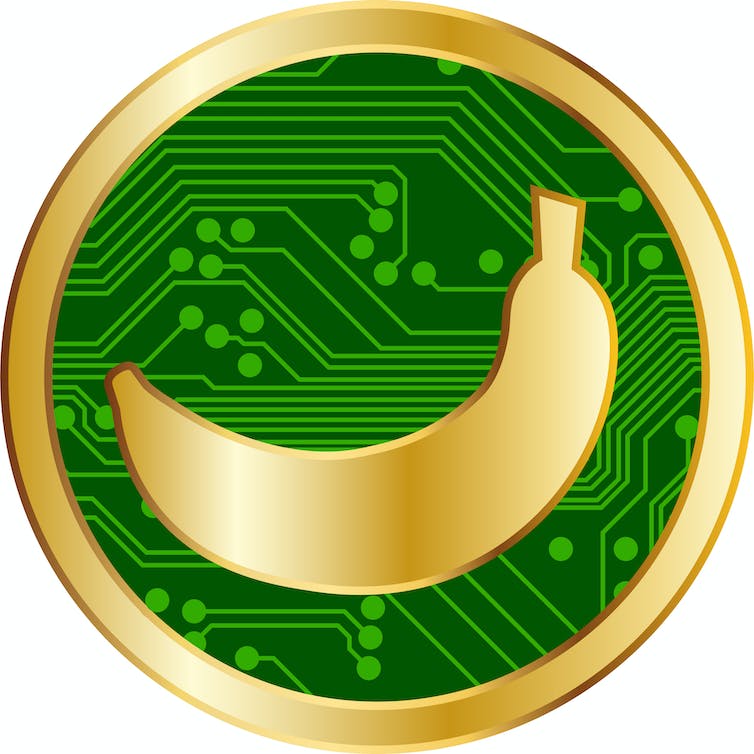 A bananacoin is pegged to the export price of one kilogram of bananas.

But even more striking in the boom of initial coin offerings is how many appear to be about some moral initiative, such as supporting sustainable energy[20], artists[21], veganism[22] or organic bananas[23].

In other words, many initial coin offerings tap into a set of emotional impulses associated with morality.

Research in social psychology[24] shows that morals are built on powerful emotions, not reasoning. Signals from our environment go through emotional centres of the brain not only before the reasoning centres[25], but even before our sensory centres – we “feel” even before we “see”.

Reasoning serves merely to justify emotional reactions. People will justify what they already want to do, or have done, after the fact.

We also know from other research[26] that while reason does give us willpower to resist emotional temptation, it has only a finite capacity to do so and can be overwhelmed.

The moral aspect of initial coin offerings also taps into our conceptions of our own identities. My research[27] shows that if I can find a way that my cryptocurrency (say a cryptocurrency for veganism[28]) would allow you to live out your moral identity (being a vegan) then it’s much easier for me to get the idea into your mind that you should buy it.

Once such ideas are implanted into the mind, they are difficult to restrain.

Read more: Australian regulators have finally made a move on initial coin offerings[29]

When we lust for riches, fear being left behind and identify strongly with some moral cause all at once, reason and willpower don’t really stand a chance.

But simply regulating initial coin offerings is difficult. One of the first things you learn in economics is the “law of unintended consequences[30]” – that regulation seldom does only what it was intended to do.

Regulations aimed at protecting individuals from themselves could restrict new technologies and discourage a necessary process – discovering what’s a stupid idea and what is a spectacularly good idea. The line between them is very fine indeed and almost never obvious.

Among all the crackpots and charlatans we might just discover a technology to educate girls in Africa, fund a breakthrough in clean energy technology, or help to stamp out human rights abuses across the world.