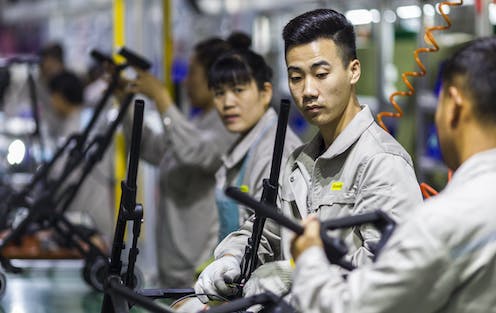 The ever-escalating tensions[1] in trade relations between the US and China[2] have caught the nerve of politicians, businesses and the public. This conflict is challenging the traditional approach to trade disputes[3], which usually involves one of the disputing countries taking the case to the World Trade Organization (WTO[4]) for arbitration or adjudication.

International institutions, including the WTO and the International Monetary Fund (IMF[5]), have warned that the consequences of the conflict could include growing economic nationalism, rising protectionism and a downturn in global growth.

This will have flow-on effects for other countries such as Australia and New Zealand.

Read more: Huawei or the highway? The rising costs of New Zealand's relationship with China[6]

Both countries have developed close political ties with the US while fostering strong economic ties with China. As China is a top trading partner for Australia[7] and New Zealand[8], the impact of the US-China trade war on their exports could be significant.

Although the dollar value of any effect of the trade war is difficult to gauge, a qualitative analysis is important so that policymakers, investors and businesses can develop an informed view of this live event.

To analyse the impact of the trade war on the exports of third-party countries, we have developed a new framework.

The first factor to consider is whether an original demand for products from a disputing country has been redirected to a third-party country. For example, China’s demand for Brazil’s soybeans has sky-rocketed over the past year, with 5.07 million tonnes imported from Brazil in November 2018[10], up more than 80% from a year ago. It is predicted that members of the European Union, Mexico, Japan and Canada, among other countries, may capture about US$70 billion of US-China bilateral trade[11] affected by the trade war.

The second factor is whether an original supply from one disputing country to another has been redirected to a third-party country. It has been reported that soybean exports from the US to the European Union have increased[12] by 133% from July through mid-September 2018, compared with the same period in 2017.

European Union consumers and downstream businesses of the soybean industry, such as producers of animal feed and biofuels, have enjoyed the benefits of a lower price[13] of soybeans as a result of the additional supply from the US.

The third factor is whether the trade tension has disrupted the global supply chain of an industry (e.g. smartphones) that is important to the third-party country. The levies imposed by the US government on imports from China are said to destabilise international supply chains[14] inside and outside of China that companies have invested in over years. Countries such as Thailand, Cambodia and Vietnam are catching up with China in terms of manufacturing expertise and capacities[15]. Companies from already industrialised economies such as Taiwan and South Korea are considering revamping their home country’s competitive advantages.

Uncertainty in the price and supply of intermediary goods from these countries into the third-party country’s supply chain are critical for determining the spillover effect on the third country.

The trade war will create risks and opportunities to third-party countries such as Australia and New Zealand. Filling the supply and demand gaps caused by higher tariffs on both sides of the trade war is an opportunity for a third-party country. But this requires flexibility in production and export capabilities in companies and industries.

As the trade spat continues, it remains a balancing act for the third-party country dangling between two political and economic powers. We have already seen the tensions between the US and China spill to this region in the context of the US ban on Huawei and its persuasion of Australia[16] and New Zealand[17] to follow suit.

Companies such as Air New Zealand[18] and Sanford[19] have been reported to face challenges on “operational” matters when the country’s political relationship with China is in question.